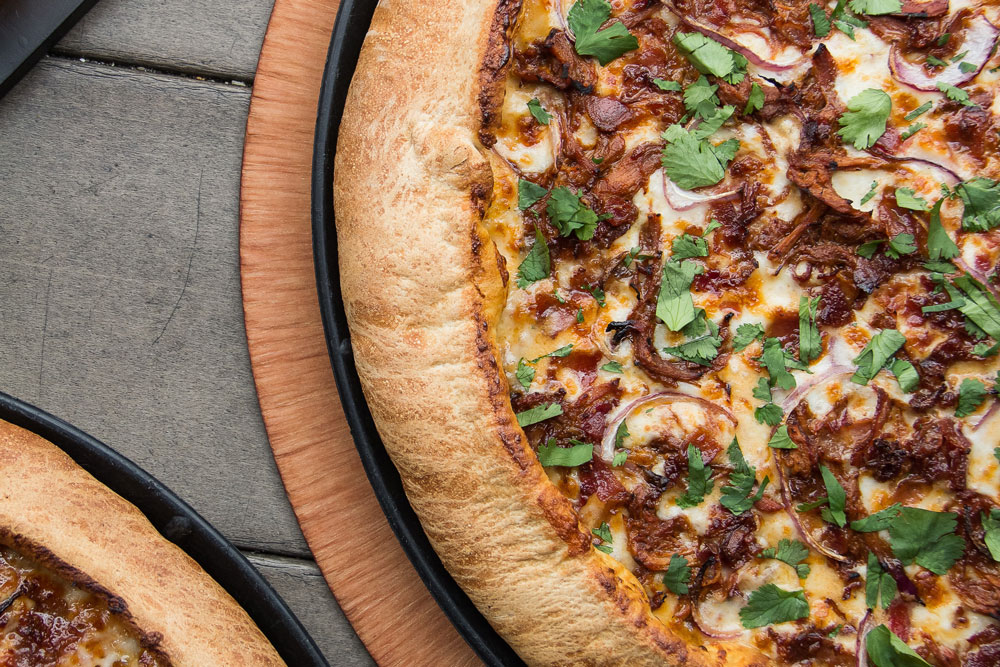 No surprise, then, that the state’s focus on local, seasonal ingredients, quirky topping combos and artisan craftsmanship, once ahead of its time, has now spread nationwide. Here, three experts from very different concepts outline what California-style pizza means to them.

“California-style pizza has a thinner crust, but the true distinction lies in nontraditional toppings that deviate from the standard mozzarella and pepperoni. Very creative and out of the ordinary, this style often incorporates a variety of the freshest local produce and California-esque accents, including avocado, artichoke hearts and grilled chicken.

“Originating in the 1980s with chef Ed LaDou at Berkeley’s Chez Panisse restaurant and widely popularized with the spread of the California Pizza Kitchen chain, California-style pizza is the West Coast’s exciting answer to the New York and Chicago styles, thanks to California-grown independent pizzerias like Woodstock’s. Variations by city are also characterized by the toppings, with ingredients reflecting the unique food cultures of each city. Woodstock’s embraces a Southern California style, incorporating Mexican-inspired culinary ingredients, such as slow-braised carnitas in the Kickin’ Carnitas pizza; healthy and locally sourced toppings, like artichoke hearts, broccoli and pesto sauce in the Pesto Primavera pizza; and even an Asian fusion with the Banh Mizza, made with sesame ginger sauce, grilled chicken, julienne carrots and sriracha. They all reflect the diversity of California!”

“The concept of letting the seasonality of fresh products drive your menu is valuable in so many ways, so there’s no mystery as to why it has spread to other parts of the country.”
— Ryan Goodwin, Craftlog.com

“For The Pizza Press, California style is a guiltless pizza. It’s about a thin crust, topped with fresh ingredients, made just for you—creating a personalized experience. From thin-crust to gluten-free and vegan options, the California pizza style combines tons of locally sourced veggies and premium meat and cheese options. California food culture came into being with Chez Panisse around the ’70s and ’80s, and California pizza came from that heritage. But as California cuisine has grown in popularity with today’s greater emphasis on health and well-being, it has influenced the nation—leading with the coasts, but now growing everywhere!”

“I was a pizzaiolo for about five years and helped build one of the top pizza programs in San Francisco. As a sous chef at Zero Zero in the restaurant’s early years, I had significant influence on the development of its style. We turned out about 500 Neapolitan pizzas a day. But I also grew up in California, so I have a fairly broad understanding of California pizza styles.

“California pizza has a thin-crust dough with a high hydration, exemplified by chains like Mountain Mike’s Pizza, Round Table and Straw Hat. These three popular chains were all started in California. The rim is crispy, and there isn’t much of a crust to speak of—nothing worth tearing off and dunking, at least. This is the pizza that most California kids will remember. But in San Francisco, Neapolitan pizza has also developed into something of a tradition. The most notable producers of this style would probably be A16 or Delfina, but the history goes deeper. Tomasso’s is still in existence, and they had the first wood-fired brick oven on the West Coast back in 1935.

“California also puts a lot of emphasis on seasonality. The concept of letting the seasonality of fresh products drive your menu is valuable in so many ways, so there’s no mystery as to why it has spread to other parts of the country. Our Mediterranean-type climate matches that of the European regions from which the concept was adapted, so California food culture continues to lean heavily on this philosophy.

“Very creative and out of the ordinary, [California-style pizza] often incorporates a variety of the freshest local produce and California-esque accents, including avocado, artichoke hearts and grilled chicken.”
— Jade Waterman, Woodstock’s Pizza

“Combine Neapolitan tradition with emphasis on seasonality and you get what a lot of people refer to as ‘Calipolitan’ pizza. I’d go another step and say that, in some ways, this style of pizza is further influenced by California-style chain pizza. True Neapolitan pizza favors a rich, developed crust, handled in many ways like an artisanal bread. But I believe that California Neapolitan has a more gooey crust, and I think this comes from an inclination, both by cooks and clientele, to in some way mimic the texture of California chain pizza. Personally, some part of me is always trying to make a version of the Round Table pepperoni pizza I ate as a kid!

“Traditional pizza has a lighter, breadier crust, and a lot more of it, whereas in California, I see a lot more focus on developing plenty of little bubbles on the edges—definitely an effect I was always going after. It makes for a crispier crust, though probably less nuanced. In San Francisco, we also couldn’t help but pick up some effect from local yeasts, and we adjusted our recipes to take advantage of that. Even though we always looked to put out an authentic Neapolitan pizza, you have to cater to demand, and there are qualities that California diners expect in a pizza. The most important difference, in my opinion, is that in Italy it’s more common to eat pizza from the plate, while in California, customers expect to be able to eat from the hand, requiring more structure in a slice than one might expect of true Neapolitan pizza.”