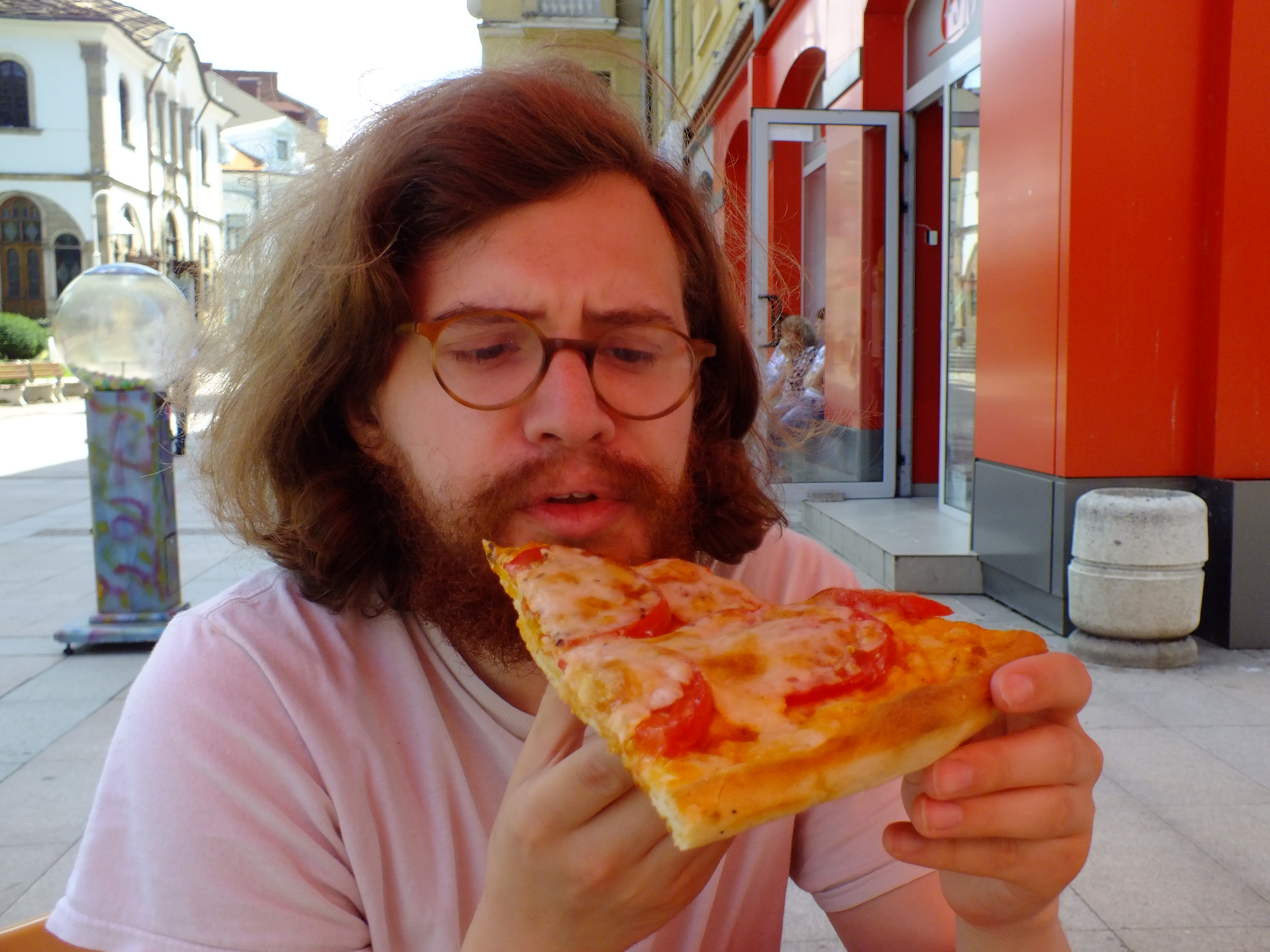 Ryan Galer, also known as “Russian Man,” is an American comic writer and frequent traveler. In support of his crowdfunding campaign to travel the Balkans, PMQ's international correspondent Missy Green requested that he sample some pizza and report back to PMQ. In his stumbling, foreigner-style persona, Russian Man uncovers the tradition of Bulgarian pizza by the slice. 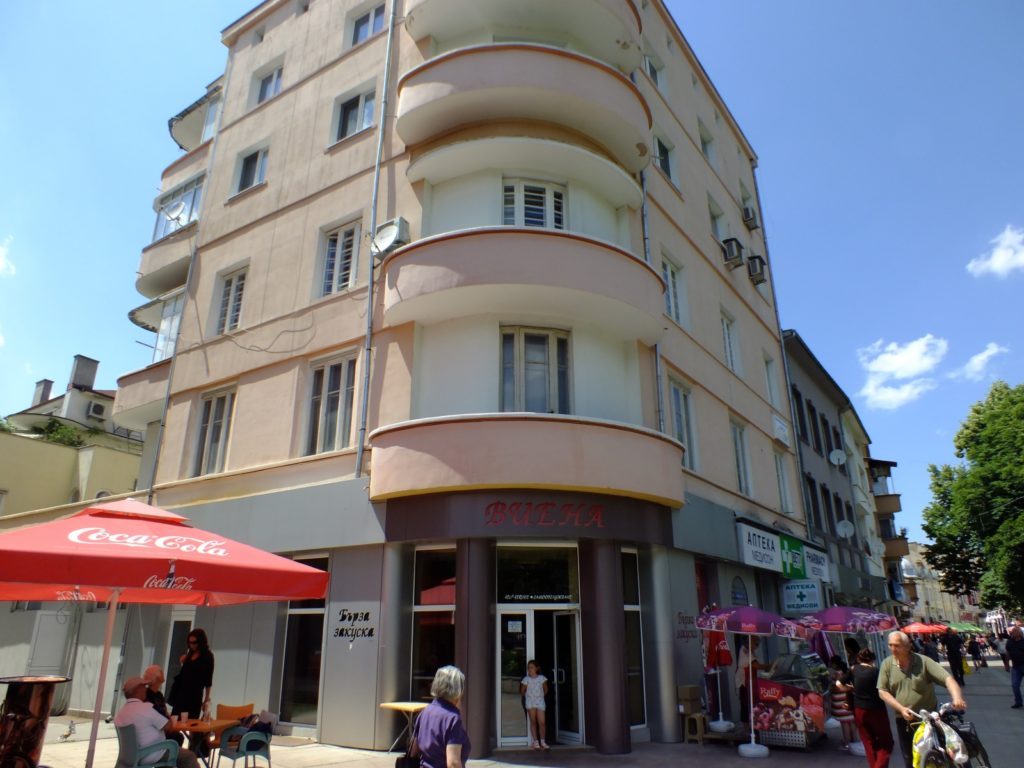 Pizza by the slice, in my opinion, is one of the great unheralded staples of American life. I've always found it pretty elusive outside of the states, though. In Paris, you have fancy, scissor-cut, pay-by-weight foccaccia that's never fit my increasingly meager budget. Otherwise, you have to buy whole pizzas at a kebab shop. I wanted a slice I could eat just about every day without feeling too over-indulgent.

Suddenly, years after I'd more or less given up the hunt, I found pizza by the slice was everywhere in Bulgaria–truly, an unexpected delight. Another bizarre discovery–the toppings on Bulgarian pizzas are often hidden underneath heaps of melted, stringy cheese – usually, a local yellow kashkaval, which I thought was rather bland. The cheese was often hiding pickles and smoked chicken. Turns out that it, too, is a Bulgarian specialty, as is its tendency to hide. I even found it in a hamburger once! I guess you could say I was rather charmed by this, though a bit frustrated too. With a comfort food I thought I knew so well as pizza, this was a bit unsettling. 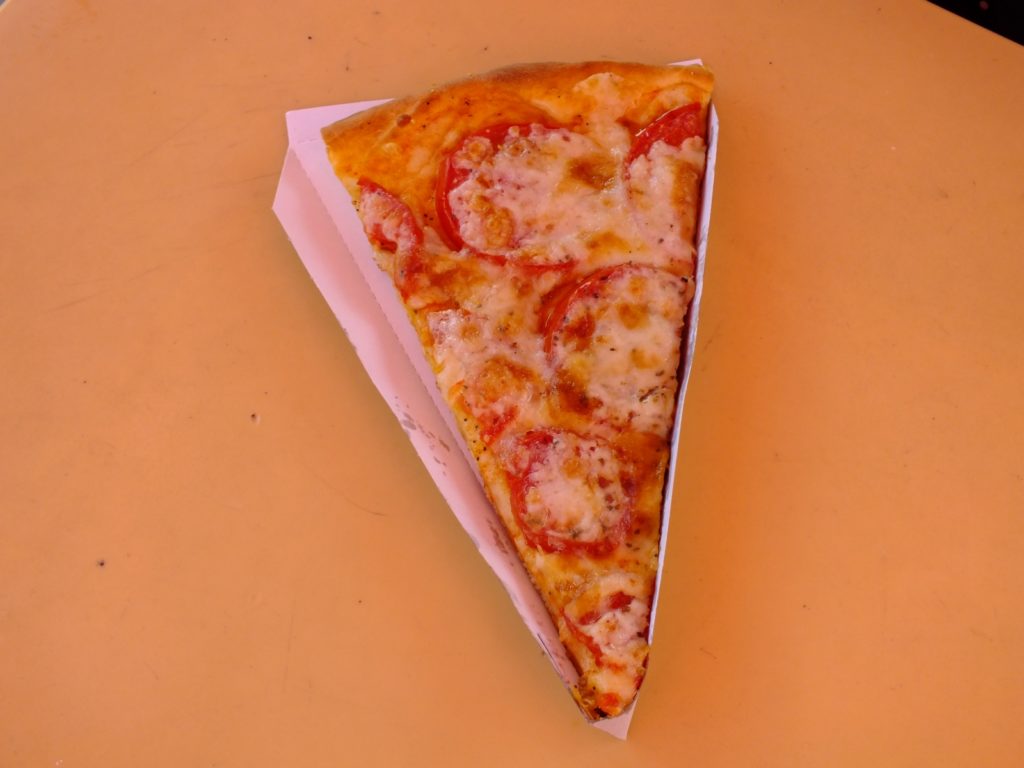 On the subject of toppings, there was another local tradition I regarded with some suspicion. This was the putting of ketchup on top of the pizzas. To be clear, I love ketchup. I'll put it on many things. But when I already have tomato sauce, or am used to it, ketchup doesn't cut it for me. Everyone was doing it though! OK, to be fair, there was mayonnaise available, too. Ketchup, though, seemed the go-to. So, I had to at least try it. What I found was a sweetening thus far not experienced in pizza. A unique treat, to be sure, but is it even pizza anymore? Unable to shrug my skepticism, I eventually decided to opt-out entirely.

For me, the big problem is that while pizza by the slice is ubiquitous here, it is often “always, already,” as they say, cold, or at best, lukewarm. And if you like that, fine. In the end, the trick I found was to go not to the fast food pizza places, but to the more traditional bakeries. And while Bulgaria is not France, there are still plenty of them. In the bakeries, they have microwaves, and while with pizza, it's not ideal, at least it's on offer. And this didn't seem to ruin it for me, the way a quick zap sometimes does.

Therefore, let it be heard, loud and clear: the bakeries are the true hole-in-the-wall pizza joints of Bulgaria. All seemed to have microwaves at ready, and to offer a great range of choices, including some very nice puffy crusts, and often a good variety of toppings. Some were lightly topped with cheese alone–ideally, the salty, feta-like white sirene (making a snack reminiscent of Georgian khatchapouri) ; others contained different kinds of meat, and last of all, there were even a few vegetarian options!

I must not forget, though, that it wasn't the pizza alone that made the bakeries special. While you were there, you could pick up the sweetest imaginable peach or apple strudel, topped with powdered sugar, like a doughnut, washing it all down with a nice and refreshing Ayran (a cold salty yogurt drink) for dessert! These places certainly had me coming back for more. I just had to find them!