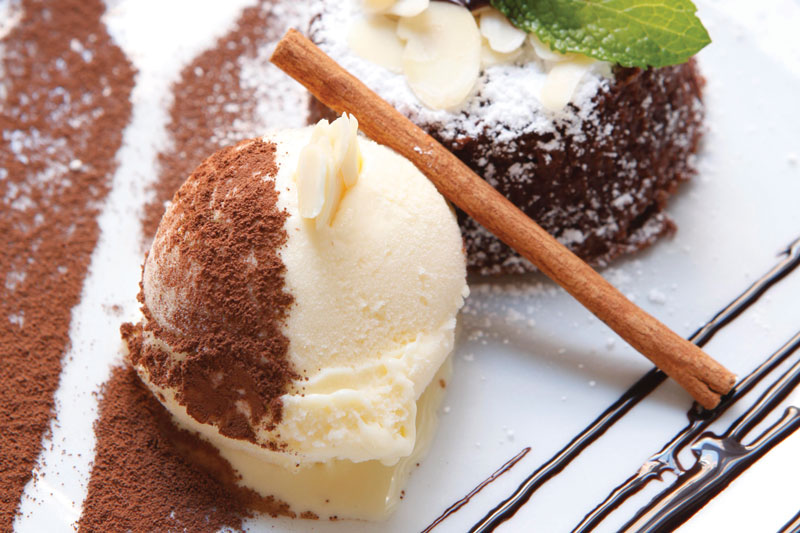 The United States holds the record for highest per capita ice cream consumption in the world, according to the International Dairy Foods Association. In a 2016 survey by research group Mintel, nine out of 10 consumers reported buying frozen desserts in the past six months, and a Harris Poll survey last year found ice cream is tied with chocolate as the second most popular comfort food (even better news—pizza came in at No. 1). Chefs, manufacturers and scoop shops keep inventing creative new flavors almost as quickly as pizza chefs design new artisan pies. Anyone up for a Black Raspberry Krunch Sundae or Hawaiian Wedding Cake ice cream?

If your pizzeria’s menu has a big hole where your ice cream and gelato selections could go, read on to find out how to make these frozen desserts work for you.

There’s a reason today’s consumers grew up on 31 flavors. Even if most people order the same flavor every time, it’s always nice to have choices.

1 Limit availability. One of the oldest ways to create demand in the marketplace is to put a limit on availability. That’s why we see so many limited-time-only promotions in almost every industry. The same tactic can be applied to your frozen desserts. “Every 12 weeks we run a Craft Pie Series promo, which is a specialty pizza paired with a gelato and a craft beer,” says Drew French, founder of Athens, Georgia-based Your Pie. “So every 12 weeks, we have another unique gelato flavor, depending on the season.”

2 Provide size options. Don’t stop at a bowl of ice cream. Think about the different artisanal options for frozen desserts, such as milkshakes, cones, sundaes and more. “Our most popular frozen desserts are ice cream cones and bowls, followed by pints and quarts,” says Dan Urbancic, owner and manager of Papa-Roni’s in Barberton, Ohio.

3 Showcase flavor variety. There’s a reason today’s consumers grew up on 31 flavors. Even if most people order the same flavor every time, it’s always nice to have choices. Pick a few crowd favorites and rotate seasonal flavors in a few times per year to give you something to promote. “We have 12 regular gelato flavors that are consistently available, along with one to three seasonal flavors,” French says. “We try to keep the flavors rotating, working with our gelato company for flavor suggestions.”

“Everyone loves gelato, and we try to differentiate ourselves in authenticity compared to restaurants serving ice cream.”
—Rosario Procino, co-owner of Ribalta

4 Reinforce your brand. Before choosing a frozen dessert, think about your brand. If you’re a classic Neapolitan restaurant, consider the advantages of serving Italian alternatives to ice cream. “The most popular dessert for a restaurant like ours is gelato,” says Rosario Procino, co-owner of Ribalta, with locations in New York City and Atlanta. “Everyone loves gelato, and we try to differentiate ourselves in authenticity compared to restaurants serving ice cream. Always look for something that makes you different from others, while making sure to keep it a fit with your menu, style and identity. Gelato counts for 26% of our dessert sales, with percentages increasing in the summer.”

5 Create a designated space. If you have the real estate for an ice-cream bar, a cooler displaying your flavors, or an outdoor patio that can regularly promote your ice cream or gelato, take advantage of it. “Overall, 15% of our guests order ice cream, but during the summer, when our ice cream patio is open, we sell more ice cream than the rest of the year,” Urbancic says.

6 Get social. Whether you show off mouthwatering ice cream cones, smooth gelatos, or sky-high sundaes and shakes, don’t forget the power of social media—and enticing photographs—to promote your frozen desserts. “Our social media posts are a mixture of pizza and ice cream,” Urbancic says. “Some of our pizza specials include pints, quarts or milkshakes to promote those items.”

7 Announce freebies and run contests. If you have an ice cream counter, you should already be giving out free samples to inspire purchases. Beyond sampling, consider free ice cream or gelato days that coincide with special events, such as your pizzeria’s anniversary or National Ice Cream Day (Sunday, July 16). “For the past two years on National Ice Cream Day, we’ve given out free gelato,” French notes. “We do it to raise awareness about our gelato and reward our customers. This year, our best store gave out about 800 scoops. We get a lot of new customers out of it.” In conjunction with National Ice Cream Day, Your Pie also rewarded one lucky customer with free gelato for the rest of the year after asking guests to post pics of gelato with a special hashtag.

8 Offer delivery. Don’t underestimate the profit potential in dessert delivery. “During the winter months, ice cream pints and quarts overtake our cones and bowls, since we deliver our ice cream,” Urbancic says. “We will even deliver an order that consists only of ice cream, so even during the colder months, 10% of our guests purchase ice cream.”

9 Promote everywhere. In addition to social media, don’t forget to promote your frozen desserts on menus, table tents, digital menu boards, flyers, window clings and anything else your guests see. “We promote our ice cream in almost all of our advertising,” Urbancic says. “It takes up the whole back of our takeout menu, and we have menu boards for it in our lobby.”

10 Hook the kids. Many pizzeria restaurateurs have learned that the way to a parent’s heart is through their children’s stomachs. “A scoop of gelato comes with our kids meal, so a lot of parents tell us their kids ask to come to Your Pie because they know they’ll get gelato,” French says.

11Always upsell. When taking orders over the phone, at the table or online, your staff should make an effort to upsell customers to a frozen dessert. “Most of our orders come over the phone and online,” says Urbancic. “When we have seasonal flavors, we suggest a pint or quart as an upsell over the phone.”