Bacon is the fastest-growing protein in the pizza business, so give your customers what they want. - PMQ Pizza Magazine 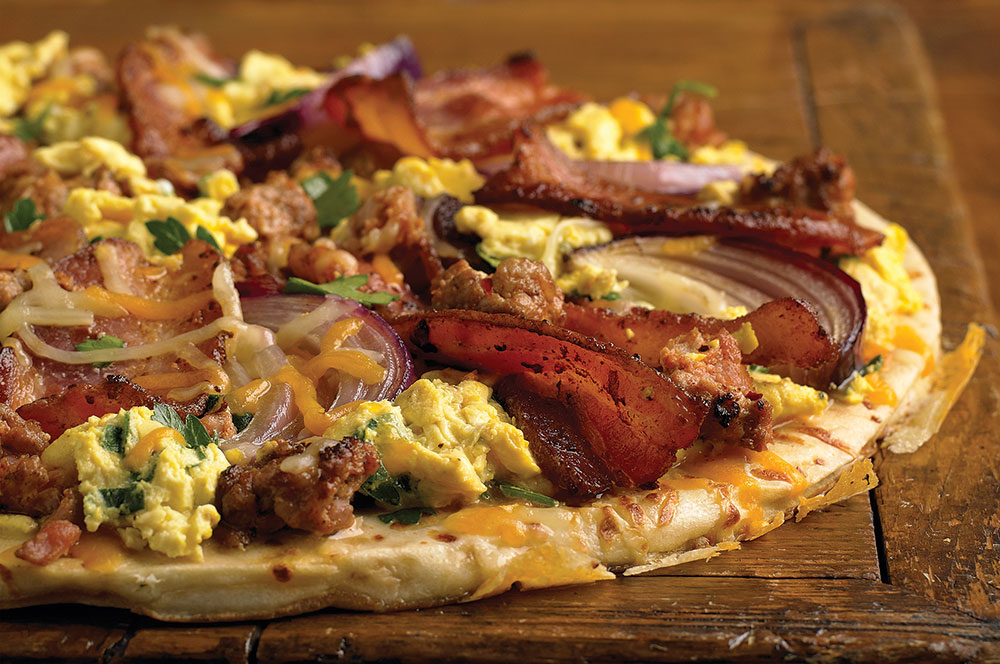 There’s no good reason to fight the bacon boom that started a few years back, so you may as well start taking advantage of it. Over the past 10 years, bacon has graduated from a humble breakfast staple to something of a cultural icon, making an appearance in every menu category—including drinks and desserts—and boasting millions of fans with dedicated websites, books, T-shirts, toys, memorabilia and more.

“I’m a big fan of bacon. I think it’s the duct tape of the foodservice industry and the ultimate savory ingredient,” says Jason Casassa, a chef in research and development for Paris-based Sodexo Worldwide. “I pair it with sweeter items to bring out its smoky flavor, such as a salad with Vidalia onion or strawberry dressing; chocolate; or a pizza topped with goat cheese, sun-dried tomatoes and caramelized onions. I tend to stay away from pairing bacon with cheddar or Gouda, since they’re already smoky on their own.”

Here in the United States, pork belly is typically used to produce bacon, but it can be made from just about any part of a pig. “Irish bacon comes from the loin; cottage bacon from the shoulder; guanciale from the jowl and cheeks; and Canadian bacon from the loin,” Casassa says.

Because bacon is cured with salt and smoke, it adds those flavors to the food that it accompanies and enhances the flavor of anything that you pair with it.”
—Jason Boniface, Red Door Wine Market

And the pig is one popular ungulate. According to Technomic’s 2013 Volumetric Assessment of Pork in Foodservice, pork has been the fastest-growing protein over the past two years, with 62% of pork consumers likely to order pizza topped with pork for dinner. Bacon use grew 2.4% between 2011 and 2013, with Technomic data naming it the most frequently menued pork product, offered by 100% of chain operators.

Of course, bacon works on nonpizza menu items, too.
According to Technomic’s 2013 Center of the Plate Trend Report, 51% of consumers agree that most sandwiches would be better with bacon, and 79% are willing to pay more for sandwiches topped with the savory protein.

When it comes to pizza and bacon, there’s certainly no shortage of bacon-topped pizzas out there. At Salvatore’s Tomato Pies (salvatorestomatopies.com) in Sun Prairie, Wisconsin, the fig and bacon pizza has become one of the pizzeria’s best sellers, winning contests and being written about in local papers, says chef and owner Pat DePula. “We’re known for the pizza regionally, and it was recently voted best specialty pizza in Madison—and we’re not even in Madison.”

Steve Hoog, co-owner of Pizza Junction (pizzajunctionhillsboro.com) in Hillsboro, Missouri, says his pizzeria, which opened in July 2013, is selling more bacon than almost anything else. “We average four bacon-only pizzas per day, and offer several other bacon-topped pizzas, including bacon with crab on Alfredo sauce, the All-American Bacon Cheeseburger Express and our Stockyard, which is beef, pepperoni and a lot of bacon,” Hoog says.

“I pair bacon with sweeter items to bring out its smoky flavor, such as a salad with Vidalia onion or strawberry dressing, or a pizza topped with goat cheese, sundried tomatoes and caramelized onions.”
—Jason Casassa, Sodexo Worldwide

In addition to several more bacon-topped selections, Pizza Junction serves a breakfast pizza with gravy, egg, sausage, peppers, mushrooms, mozzarella, cheddar and bacon. Then there’s the garlic cheese bread with bacon—it started as an employee favorite but will be added to the next menu update, Hoog notes.
Hoog purchases precooked Hormel bacon and uses it for the pizzeria’s salad bar, as well as listing it as one of Pizza Junction’s 35 or so topping choices. “We use ⅜”-thick cut pieces of bacon, which makes for a great covering of bacon without putting too much on the pie,” he says. “Every once in a while someone complains that there’s not enough bacon, but six ounces of ⅜” pieces on a 14” pie is ridiculous as it is. A few people order double bacon.”

At Flying Pig Pizza Co. (flyingpigpizza.com) in Sauk Rapids, Minnesota, the Baconator—topped with cheese, bacon, macaroni and cheese, more bacon and three more cheeses—ended up on the menu as the result of a Facebook contest, according to owner Roy Dodds. “The Baconator is here to stay; it’s too popular to take off the menu,” Dodds says.

Jason Boniface, head chef of the Red Door Wine Market (reddoorwinemarket.com) in Lakeland, Florida, and a self-professed bacon fan (with a tattoo to prove it), says that bacon pairs well with everything. “Because bacon is cured with salt and smoke, it adds those flavors to the food that it accompanies and enhances the flavor of anything that you pair with it,” he says. The restaurant, which offers weekly pizza specials, also features a popular egg and bacon salad with fried poached egg, house bacon and warm bacon dressing.

There have always been health concerns when it comes to the fat and sodium content in bacon. Some reduced-sodium versions have 40% less sodium, but most experts agree that moderation is key to enjoying bacon without the increased health risks. “Low-sodium bacon is a little healthier, but not by much; you might not be taking in the salt, but you are eating a lot more nitrates that they use to help cure the bacon, and I think nitrates are way worse for you than salt will ever be,” Boniface says. “Bacon is a fatty piece of meat, which is delicious, but you’re ingesting a lot of fat and cholesterol, which I would be more concerned about than the sodium.”

Some health-conscious consumers have made the switch to meat-free bacon alternatives, with Mintel reporting that one in three Americans now enjoy meatless alternatives on occasion, even though only 7% of consumers claim to be vegetarian. Meanwhile, turkey bacon has become more popular in recent years. While regular bacon’s incidence in breakfast dishes has continued to grow—up 19.1% between 2009 and 2012—turkey bacon has seen an even more dramatic increase, rising by 233.3% during the same time period. This jump may reflect a desire to eat something healthier rather than giving up bacon entirely.

On the flip side, Mintel experts also note that, while consumers continue to clamor for healthier options, research shows that 44% of consumers admit to giving in to cravings while dining out.

In other words, even the most health-conscious diner probably can’t resist bacon in some form or another if you’ve got it on your menu. In fact, the only disadvantage to bacon is the mess required to prepare it. While most pizzerias offer bacon, many struggle with whether or not to cook it in-house. Some say the splatter, grease and burn potential are not worth the trouble, opting for precooked bacon from foodservice suppliers. Others argue that nothing compares to fresh bacon, preferring to cook it on parchment paper in the oven rather than on the cooktop.

“I’ve never used precooked bacon,” Casassa says. “When you cook something fresh, there’s a difference in taste and quality. It doesn’t take long to cook bacon on-site and have it taste its best. You can put three or four sheets of bacon in the oven at a time. The oven is a controlled environment with no crackling or popping, and you can save the grease for other applications.” 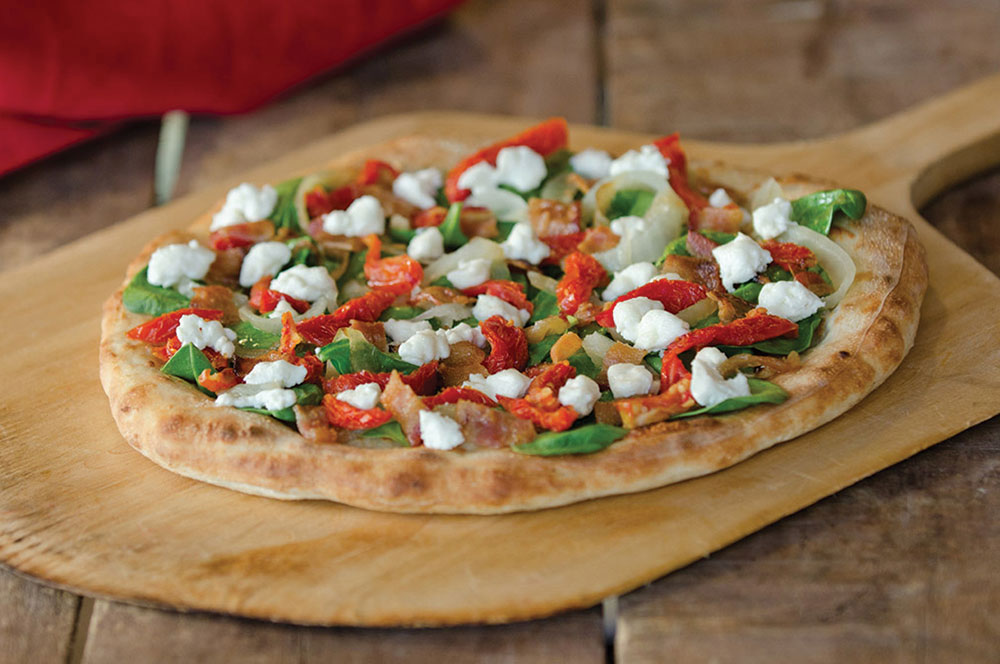 Some operators, such as Boniface, prefer to cure and smoke their own bacon, but it’s a labor of love. The bacon making process involves taking pork belly, cutting it to size, adding a wet or dry cure of your choosing, curing it for several days, rinsing off the seasoning, smoking the resulting bacon, and cutting it into slices for baking or frying.

“Wet curing involves immersing a large cut of pork (i.e., pork belly) into a saltwater solution in a cold environment for a few days,” Boniface says. “This keeps the pork supple and tender and less salty. Dry curing is when you cover your piece of pork with salt and other spices, helping to preserve the bacon for longer. You can dry-cure it in any environment, hot or cold. Dry curing it also gives the meat a saltier, more flavorful taste.”

If you’re going to go to so much trouble to make your own bacon, take every opportunity to brag about it to your guests. Promote it on all of your marketing materials and menus—bacon enthusiasts will seek out chefs who love bacon as much as they do.