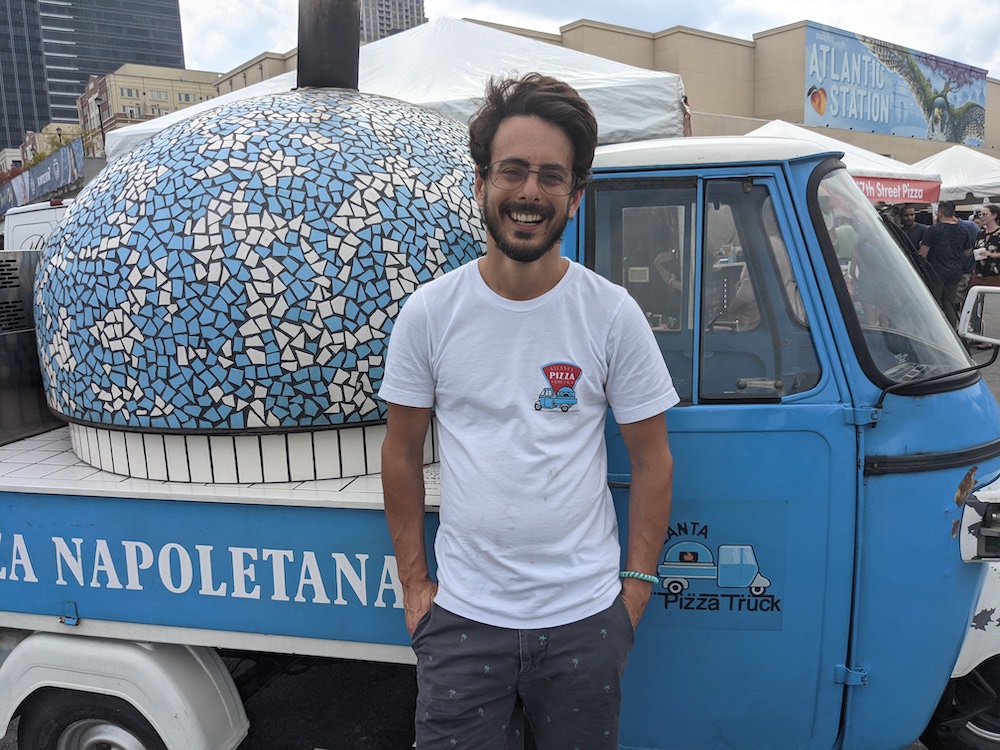 Related: Neapolitan pizza gives us something to be thankful for

Alessio Lacco, owner of the Atlanta Pizza Truck, made pizza history recently when he became the first mobile pizzeria operator certified by the AVPN (Associazione Verace Pizza Napoletana), the global leader in Neapolitan pizzeria certification with 900 affiliates around the world.

“We have observed with great curiosity and carefully studied the phenomenon of food trucks—a trend which, starting from the USA, has quickly spread globally,” says AVPN president Antonio Pace. “We have prepared an ad hoc disciplinary certification, and it seemed right that the first certification belonged to a ‘true’ Neapolitan, Alessio Lacco, a pizza chef who grew up in AVPN [and] is enjoying extraordinary success in the States.”

In partnership with his wife, Sofia Arango, the Naples-born Lacco operates his business out of a 1982 Ape Car, a blue three-wheeler mounted with a wood-fired oven. The large, eye-catching scooter is likely hard to miss even in Atlanta’s famously dense traffic. And when the Ape Car shows up at an event in the metro area, many of Lacco’s customers get their first-ever bite of authentic Neapolitan pizza.

Lacco, who trained under master pizzaiolo Gaetano Esposito in Naples, has been assigned the AVPN certification number 900, which also happens to be the precise temperature (in Fahrenheit) at which authentic Neapolitan pizza is baked. Esposito is the grandson of Raffaele Esposito, who famously crafted the first Margherita pizza for Queen Margherita of Savoy in 1889.

Born in 1991, Lacco learned pizza-making while working for his uncle, who owned a restaurant in Naples. Before eventually moving to the U.S., Lacco studied with AVPN to fully grasp the rules and master the nuances of authentic Neapolitan pizza. “I knew that, on the other side of the ocean, I would need an endorsement like the one offered by the AVPN brand—and so it was,” Lacco recalls.

“Americans are rightly concerned with quality and compliance with the rules,” he adds. “If you come to their house to offer an iconic product like Neapolitan pizza, they want it to be following all the trappings.”

Lacco opened his first AVPN-certified pizza shop in Dallas in 2013. Then he moved to California and embarked on a career as a Neapolitan pizza consultant, which took him to far-flung locations from Indiana, Oregon and Connecticut to the Bahamas, Thailand, several Arab countries, South America and Norway.

Then, the pandemic hit. “In March 2020, I suddenly found myself out of work,” he remembers. “But I did not lose hope, and I rolled up my sleeves. A couple of years earlier, I had bought a 1982 Ape Car model mp601. I had it all restored. I had a wood-burning oven, sink and refrigerator placed on it and took it to Atlanta, where …. I had moved. With the precious help of my wife, we ​​decided to wait for the storm to pass to try to realize our new project.”

The Atlanta Pizza Truck peddles Neapolitan pies in the city’s parks, streets and squares as well as at corporate events and private parties, often catering to a wealthy clientele that includes billionaires, athletes and celebrities. He has been featured on Netflix and will be covered by CNN this month.

“Alessio’s success makes us proud and is a demonstration of the appeal that our pizza has in the world,” Pace said. “We are sure that many others will follow his example and that the pizza that started in Naples will continue its tour around the world, thanks to the students trained in our school and, from today, also to the veraci ‘on-the-road’ pizzerias.”