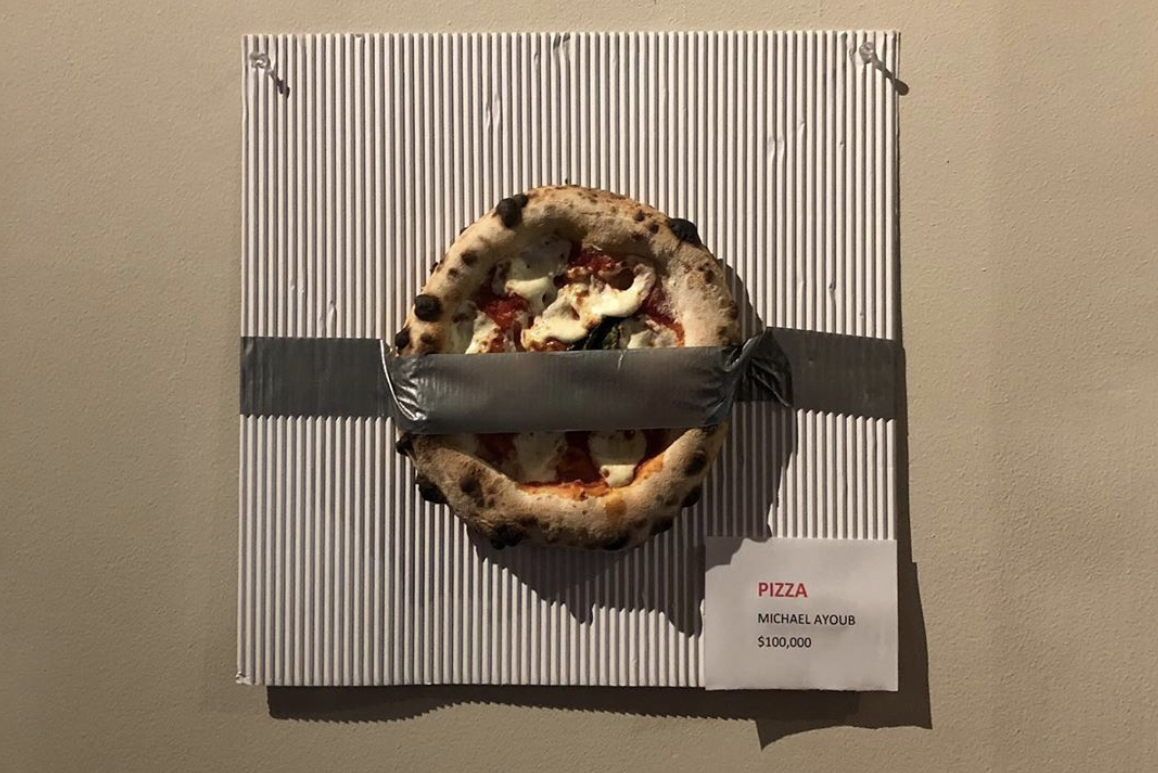 Italian artist and art world prankster Mauricio Cattelan made international headlines for his art piece, “Comedian,” which was nothing more than a banana taped to the wall at Art Basel in Miami. An anonymous buyer spent $120,000 for the rights to the oft-replaced banana only for a Brooklyn performance artist David Datuna to rip it off the wall and gulp it down.

Now there’s a Margherita pizza taped to a wall, but it comes with a slightly cheaper price tag: a measly $100,000. The artist? None other than the man who claims to have started the artisanal pizza movement in New York City: Michael Ayoub, owner of Fornino Pizzeria.

Ayoub posted a photo of the delicious art piece on Instagram to draw crowds.

“I have had a few people shopping it, but there are no buyers as of yet. I am now offering a bottle of wine to go with that pizza,” said Ayoub.

Related: A New Pizza Made with Hemp Oil Debuts at Fornino in Brooklyn

His Margherita art piece was desecrated at one point. Just two nights before our interview, someone snatched the pizza off the wall and ate it. No confirmation yet if Datuna was the culprit.

Luckily, Ayoub replaces the pizza daily. His secret to keeping it neat and tidy against the wall? “I use the perfect balance of sauce and cheese so that when it gets cold it doesn’t slide,” he said.

So what are Ayoub’s credentials as an artist? He’s an expert glass-blower, sculptor of large pieces, and a whiz at light installations. His work can be seen in the Venetian Hotel in Las Vegas and at Foxwoods in Connecticut as well as numerous restaurants throughout New York City. Several of his artwork pieces can be seen at his restaurant establishments.

Ayoub is definitely not afraid to experiment. In 2018 he introduced the New York CBD/Hemp Pizza, featuring CBD-infused olive oil baked into the crust and drizzled on top of the pie.

And he has been a chef for 45 years, so his pizzas are certainly pieces dé resistances at Fornino. “I have been asked many times what is my personal favorite pie,” Ayoub said. “My classic answer is, ‘I love them all equally as my children.'”

To anyone pondering on placing their pizzas on walls, Ayoub put it best: “Food is art, be an artist!”