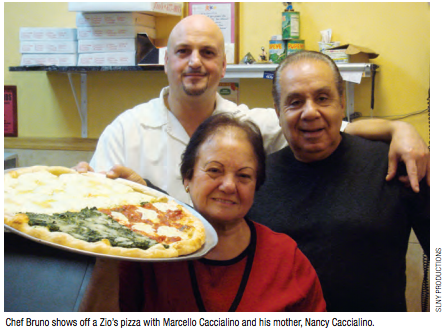 A dollar won’t buy you much in Manhattan, but a hungry diner on his lunch break can find a few pizzerias here and there selling slices for 99 cents. Usually, you can’t even buy a soda for that price! Surprisingly, selling high-quality pizza at a low price can yield a profit, and Zio’s Pizzeria and Grill (ziospizzasyosset.com) in Syosset, New York, stands out as a perfect example of how it’s done.

Marcello Caccialino has never strayed too far from the family business of restaurant management, a tradition dating back at least 50 years to post-World War II Italy. According to the Syosset Patch website, Marcello’s grandfathers, Antonio Caccialino and Marsilio Pepe, launched their first restaurant in Naples before moving to the United States, where the family operated Terranova in Long Island for many years. Marcello was born in Glen Cove, Long Island, to a well-respected New York family. He rose through the industry’s ranks by toiling in kitchens for years, both in the United States and in Naples, and became an executive chef after training under Ralph Ammaccapane, the “Galloping Gourmet of Arizona.”

Recently, after 25 years in the pizza business, Marcello opened Zio’s in Syosset. This mom-and-pop pizzeria serves fine entrees, from chicken scarpariello and veal Parmigiana to grilled Tuscan steak and Zio’s Famous Tripe Terranova, prepared in the traditional Campagnola style, all for between $15.95 and $18.95. Caccialino also has been known to peddle slices of cheese pizza for 99 cents with a PennySaver coupon and offer a lunch special consisting of two regular slices and a medium drink for only $5.50.

At prices like that, I could not believe how well they’re doing. What’s their secret? High-quality food and plenty of it. Caccialino’s personality is unbeatable, too—he’s always smiling. His passion and love of food, family and his customers are unmistakable to anyone who spends time with him. Many celebrities and famous people—including actor Steven Seagal and Hillary Clinton—have enjoyed meals prepared by Marcello. I have sampled most of the pizzas myself, and, after several visits, I knew I had to write a story about this pizzeria. 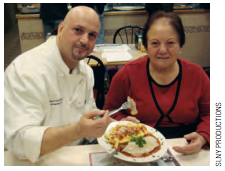 Like other members of the Caccialino family, Marcello is a fanatic about the quality of his dough and bread. He chooses only the finest ingredients for his pizzas and pasta dishes. Pizza toppings at Zio’s include penne, baked potato, taco, buffalo chicken and eggplant, to name a few. Popular pizzas include the Grandma, the Spinach and the Margherita, with prices between $16.55 and $20.25.

Food costs are out of control throughout the pizza industry. The costs of some items have soared by 40% to 45%. I called about 20 pizzerias recently, and all of them were having a tough time with these price increases. But Zio’s appears to thrive by keeping its quality high and its prices low. And, as the Syosset Patch reported, Marcello hopes to turn Zio’s into a franchise concept. “Good food, hard work and a passion for what you do will overcome the economy,” he told the Patch. “I think [Zio’s] will prosper with the surrounding community and Syosset. Their response will allow us to grow and…open up more Zio’s.” Zio’s Pizzeria and Grill See cooking demos by Chef Bruno on PizzaTV.com. New York’s Finest Chef Santo Bruno 18 PMQ Pizza Magazine – The Pizza Industry’s Business Monthly Marcello Caccialino keeps quality high and prices low at his new Zio’s concept.

Chef Bruno is PMQ’s culinary advisor, with more than 40 years of international pizza experience. He is the corporate chef for Marsal & Sons, and the culinary coach of the U.S. Pizza Team.