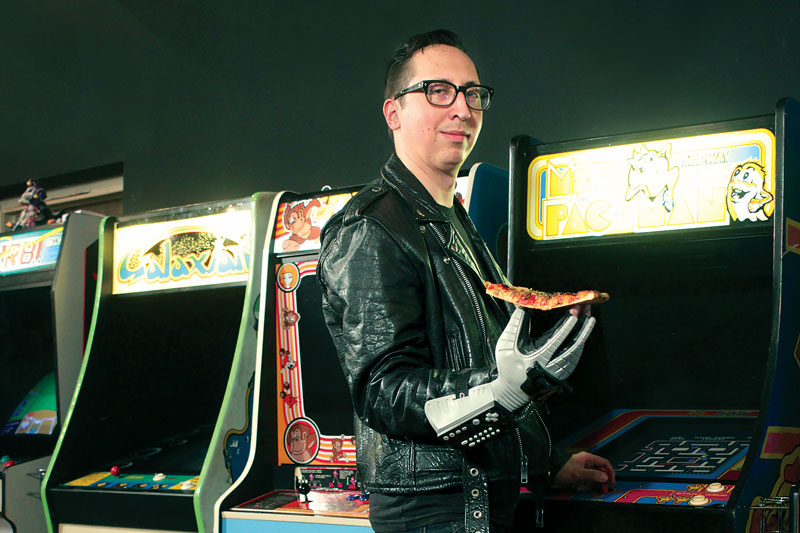 If you thought Donkey Kong was long gone, think again. Arcade games are still red-hot attractions, only now they appeal to kids and adults alike—especially millennials. And more pizzerias are getting in on the action, adding coin-operated video games and pinball machines to their entertainment mix.

Sure, the constant noise and commotion may annoy the heck out of Grandpa, but your younger customers are eager for some Pacman fever and ready to go ga-ga for Galaga all over again. And there’s nothing like a rousing game of Terminator to work up an appetite.

“The video game arcade—that magical place full of flashing lights, blaring sounds, and sore fingers blasting away at buttons—is in the midst of a veritable renaissance, as everything old is new again,” says Daniel Lee Perea, media producer for PMQ Pizza Magazine and video game world champion. “From the mainstream Dave & Buster’s franchise to the ultra-chic Barcade in New York City, the arcade bar concept has turned the nostalgic appeal of old games into entertainment destinations. Far from being just museums for older customers to relive some quarter-dropping glory days on Frogger or Galaga, these arcade bars attract a wide age range of players, including hip, youthful patrons—some of whom are even younger than the games they enjoy playing.”

More and more pizzerias have cashed in on the craze by offering up retro gaming options. At Ian’s Pizza in Milwaukee, the upstairs dining room houses a vintage arcade for customers, focusing on classic games like Pacman, Shinobi, Galaga, Donkey Kong and Gauntlet. “Every play is only a quarter, and some of the games in our arcade can’t be found anywhere else in the city,” notes Andy Johnson, marketing director for Ian’s Pizza, which has four locations in three states.

The 50-seat Forbidden Planet Pizza Arcade in Iowa City, Iowa, open since late 2014, factored in arcade games from its inception as a way to differentiate itself in a crowded landscape. With four pinball machines and nostalgic arcade games such as Jr. Pac-Man, Tetris, Galaga and Teenage Mutant Ninja Turtles, the fledgling pizzeria has put itself on the map as a gaming destination. “We’re in a college town, a highly competitive market with plenty of other pizza, so our idea was to make a great product and draw people in with the arcade aspect,” explains co-owner Luther Moss. “We’ve now become the place to play pinball, which is by far our most popular draw, bringing in an entirely new market.”

Indeed, Moss finds the games are popular across demographics: families enjoying pizza night, college kids and young professionals looking to blow off some steam, couples on first dates, and grade-schoolers on summer break. “We’ve seen a lot of success with the games and were amazed at how quickly they pay for themselves,” Moss adds. “They now bring in 5% to 7% of our revenue. Since we’re in the first years of our business, that 5% increase is huge.”

Big Daddy’s Pizzeria, meanwhile, has three locations in Tennessee, but its Pigeon Forge location stands out, thanks to its Hollywood Arcade, boasting a range of entertainment options. From Guitar Hero and Deal or No Deal to air hockey and basketball games, coin-gobbling machines spit out tickets that customers can collect to redeem prizes. “The most popular games are a combination of the old-school ones that draw on nostalgia for the adults—think skee-ball—and then whatever game kids believe will give them the most tickets,” says Kelly Johnson, co-owner of Big Daddy’s. “Something that’s blinking ‘Win 1,000 tickets!’ will get their attention every time.”

Partnering for a Win-Win

Some pizzeria owners purchase their own machines, but many opt to work with an outside vendor to provide and service the machines, then split the profits. “The industry standard is 15% to the house, or 20% if it’s a good location,” says Brad Hines, owner/operator of South Shore Vending in New Bedford, Massachusetts. “Some pizzerias host their own, which is not unreasonable; they just have to learn to clean it, fill it, repair it and transport it. I always recommend that people who want to self-manage one should check places like Craigslist and eBay, where secondhand choices have serious discounts.”

Kelly Johnson doesn’t recommend buying your own machines. She notes that many of them—that skee-ball setup, for example—are very expensive, though costs range greatly. In addition, her customers like to see games swapped out monthly (based on usage) to make room for new additions, which is less feasible if you’ve purchased the machines outright. “All arrangements are possible, but we chose to partner with an amusement company so we could draw on their expertise,” she says. “They bring in the new and take out the old, service them when issues occur, and generally strategize with us, while we staff and stock the redemption counter. The revenue-sharing situation makes it a win-win.”

Ian’s also works with a gaming operator. “We supply the space, and the operator supplies and services the machines,” Andy Johnson says. “We arranged a 50-50 split on the profits; right now, our profits are about $50 to $100 per month, but the games are gaining popularity.”

“If there’s a half-hour wait, we give out free tokens as a bonus for customers to stick around for a table. If they buy too many tokens on one visit, they’ll come back to use them up—an incentive to return.”
—Luther Moss, Forbidden Planet Pizza Arcade

Moss purchased his own machines because he couldn’t find a reputable gaming provider in his area, and no one had the vintage games he sought. He wanted to offer selections that no one else carried, so he purchased a few from companies, private owners and collectors. “The arcade community is tight-knit and really positive—a great resource,” Moss describes. “Those personal relationships help when fixing or moving a machine. We even got a couple for free.” He notes that costs can range from $200 for an arcade game to $8,000 for a rare or brand-new pinball machine, but he handles most of the maintenance himself. “There’s always something to do, and some of the electronic stuff is beyond my means, but very rarely are any of the machines in our pizzeria not working,” he adds.

Other options let you avoid the profit-sharing arrangement. Happy Gaming, based in Antioch, California, restores and rents out classic arcade games to businesses. “Some owners will simply buy their games outright, but then it’s not as easy for them to keep the games fresh by changing them, and they can break down a lot,” says co-founder and CEO Seth Peterson. “But instead of
revenue share, our company leases the games for $75 per month, and they’re free to keep 100% of the revenue.”

Of course, this type of arrangement depends upon traffic. Peterson notes that some locations make about $300 per game a month, while lower-traffic places sometimes don’t break even. “Interestingly, the bulk of our customers put the games on free play and don’t earn anything at all from them,” Peterson says. “They use the games to attract customers and make higher food and drink sales. If a bar is earning $900,000 per year as a local watering hole but can increase their sales by 40% by simply adding 10 games on free play, they stand to make a lot more money from extra beer sales—$360,000 in extra business vs. $18,000 per year in revenue from quarters.”

Operators don’t need a huge space to start testing the waters of coin-operated entertainment. “Start with one game—you’ll need only about five square feet for the first one,” Andy Johnson advises. “We would recommend trying to find an operator that has games ready to go. It costs you nothing, other than the space the machines take up.”

Generally, Hines advises against adding games if they don’t fit your pizzeria’s personality; if the machine makes too much noise, generates trash, or detracts from your location, you might reconsider. But even if games fit your restaurant’s vibe, you will likely want to place them where they don’t wreak havoc on dining experiences. “Our arcade is attached but totally separated so that customers in the restaurant can’t hear the machines,” Kelly Johnson points out. “While we have many customers who would love the opportunity to play with their kids while waiting for their pizza, we also have customers who do not want to be involved with the arcade. There is an open door and a lot of glass windows so people can see the arcade, but otherwise they would not know it was there, as the noise does not enter the restaurant itself.”

“We were amazed at how quickly [the games] pay for themselves. They now bring in 5% to 7% of our revenue. Since we’re in the first years of our business, that 5% increase is huge.”
—Luther Moss, Forbidden Planet Pizza Arcade

Moss says his games are key to “shaping the experience,” with their quirky noises, vintage vibe and glowing screens. Forbidden Planet has even named specialty pies after classic games and hosted tournaments in-store. But the machines are kept in the back of the pizzeria, with dining up front. “The biggest problem is waitstaff moving through if it’s really crowded, but overall the games are a benefit,” Moss says. “If there’s a half-hour wait, we can give out free tokens as a bonus for customers to stick around for a table. If they buy too many tokens on one visit, they’ll come back to use them up—an incentive to return. Some people come in just to play, and some don’t play at all, but the games help create an open, friendly, inclusive environment that’s safe for kids and fun for adults.”