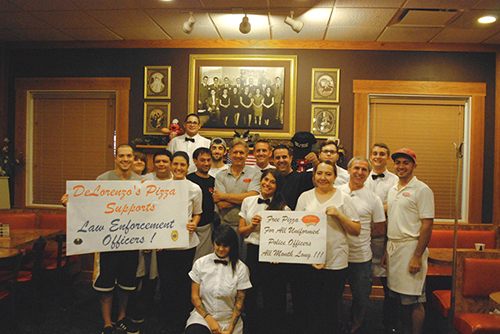 According to Bizpacreview.com, owner Rick DeLorenzo posted his Facebook offer to feed policemen free at his restaurant throughout September because he was appalled by the hate and violence against law enforcement he has seen in the news lately. DeLorenzo told Fox News his offer is a statement against groups like Black Lives Matter protestors, who he says, targeted police with chants like "pigs in a blanket," and "fry 'em like bacon." “I woke up Wednesday morning and said I wanted to do something to reverse the negativity, do something positive,” DeLorenzo says.He adds that he's not worried about losing money and he hopes other businesses follow his lead. “Give them the respect they deserve,” he says. “They’re laying their lives on the line every day.”

Read more about one pizzeria owner's action to put his pizza where his passion is.