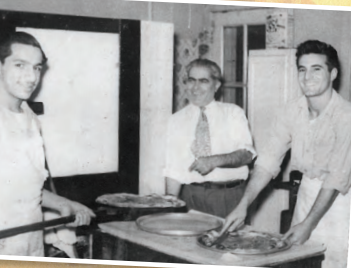 There were already other pizzerias in Trenton, New Jersey, when Naples transplant Giuseppe (“Joe”) Papa decided to open Papa’s Tomato Pies (papastomatopies.com) in 1912, but this institution is the only one from those early days that’s still standing. Joe was only 17 years old when he opened his doors, and made dough by hand, cooking the pies in a coal oven; his wife, Adalene, made the meatballs and pasta sauce. After a couple of moves within Trenton, the location landed at Chambers Street in 1945, where it remains today. As years passed, new generations took over the business: After Joe and Adalene, their daughter Teresa Azzaro ran the pizzeria with her husband Dominik; later, her son Nick (who still mans the pizzeria almost every day) took over, and today he and his son Dominick (“Donnie”), along with Nick’s cousin Chip, are the only ones who make the famous tomato pies. “There are people who make pizzas, and then there are people who know what they’re doing,” laughs Nick. “I’ve made more than three-quarter million pizzas over my 50 years in the business, but I put a lot of care into it—that’s really the secret.” 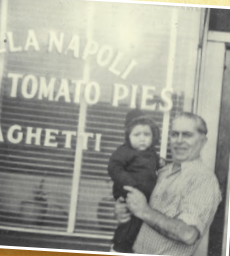 Nick says that “tomato pies” became increasingly known as “pizza” in the ’50s when neon sign manufacturers charged by the letter and operators wanted to keep costs down, but the Trenton tomato pie remains its own style, starting with a thin crust that’s topped first with cheese, then tomato sauce. At Papa’s, the menu even offers a mustard pizza, a dough spread with Gulden’s Spicy Brown Mustard and topped with cheese and tomato sauce (“Some people love it,” says Nick). Meanwhile, the interior of the restaurant hasn’t changed since 1963, which regulars and new customers love—and they come in droves from all over the country to experience this much-lauded pizzeria. “People will come from 70 miles away to get our pizza—it’s just amazing,” Nick marvels. “If I wasn’t making good pie, I’d retire, but I’m still healthy, and it’s hard to give it up!”