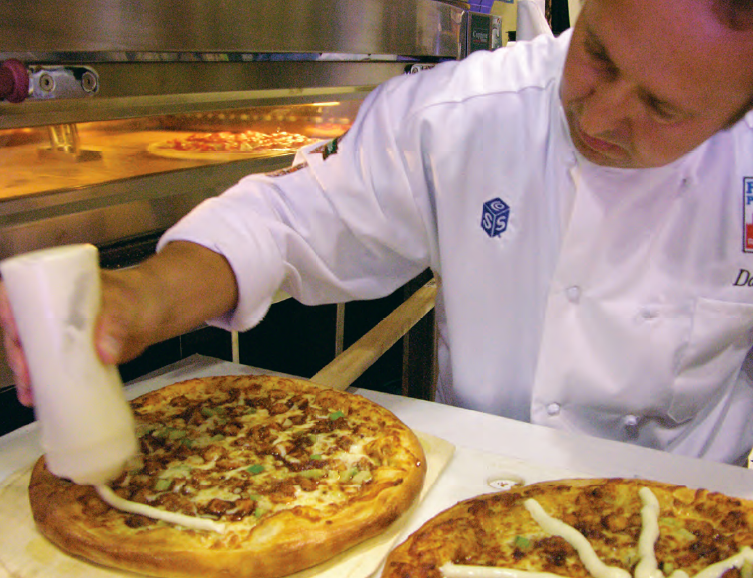 As the editor of PMQ, I’ve been involved with pizza competitions for nearly eight years. It’s never ceased to amaze me how difficult making a pizza any place other than your own kitchen can be. I’ve seen competitors mixing dough in hotel sinks, slicing toppings on hotel dressers, and sweating it out on the morning of competition. I’ve often said that it would be interesting to enter one of PMQ’s contests myself—not for a score, but for the experience—and to write an article on what it’s like.

There are the issues of traveling with perishable food, getting kitchen knives through security, and figuring out how to keep all the ingredients fresh for two to three days. When it comes to a competition, Murphy’s Law is definitely in eff ect…anything that can go wrong will go wrong. If that isn’t enough, trying to make your best pizza ever is enough stress to crack even the most seasoned pizza veterans. My best advice is always this: You’ve made thousands of pizzas before; you are good at what you do or you wouldn’t have a successful pizzeria, so relax and have some fun. Prepare, but just do what you’ve done a thousand times.

At the Orlando Pizza Show in September of 2007, I was talking with some of the competitors in the American Pizza Championships Semi-Finals and we were discussing some of the same issues I mentioned above. I talked about my idea of running through the paces to learn what it’s like when Dave Smith, (who incidentally won the Semi-Finals and the APC Finals), let me off the hook. He told me about his competing in both pizza acrobatic and cooking competitions and said he would love to give PMQ readers his competitor’s perspective. Following is his take on the competition circuit. If you’re thinking about entering a competition, I highly recommend you read what he has to say…very good advice.

I’ll never forget my first pizza competition; I was both excited and nervous. It was a dough tossing competition and the only thing I had to take was myself. During the 3 1/2  hour drive to Pittsburgh, I tried to warn my dad not to expect a lot from the competition. It was my first one, and I would be happy beating my personal records set at home (my wife stayed home to watch our restaurant and six children). I ended up taking first and third place in the fastest, and largest dough, respectively. I was hooked.

Like I said, my only preparation for that competition was to show up. Getting ready for a culinary competition is a little more involved. Yeah, you still have to fill out the forms, register for the show, and find your route. Sounds easy enough, but I live in the sticks of Pennsylvania, and have to drive over three hours to get to an international airport. Sure, I could take a commuter flight (that’s an hour away), but I’d still have a three-hour layover. I’ll drive, thank you.

Let’s not forget about the hotel. Which one to choose? You need to get from the airport to your hotel. Is there a shuttle service? Is your hotel close to the convention center? Can you walk to the competition or will you need to pay a taxi? More than likely you can book your flight, hotel, and shuttle all at one time, from the comfort of your desk. One more thing, make sure your hotel room has a refrigerator. You’ll need to keep your product cold when you dig it out of the cooler. Although some competitions offer on-site refrigeration, I’ve heard of competitor’s ingredients disappearing.

Okay, you got yourself registered, found a hotel within walking distance to the competition, your fl ights are all in order, and you’ve picked the best pizza from your menu to impress the judges. Now what?

Make a list. Make a list of everything you need to take. I can’t stress the importance of writing it down. Better yet, put the list on your computer. You can edit it as you learn from what you forgot at the last competition. (If you realize you forgot one of your toppings the day of the competition, ask the show floor exhibitors. Most are eager to help, especially if you put a good word in for them.)

How are you going to ship your ingredients? Don’t buy just any old cooler. Buy one that has wheels and a telescoping handle. The same holds true for your luggage. Money well spent now will save you a lot of backache down the road…trust me.

Buy quality, watertight plastic containers to hold your product. Pack enough ingredients for AT LEAST four pizzas. I personally use plastic wrap before snapping the lids in place. If you have the luxury of a walk-in freezer at your restaurant, put two inches of ice water in the bottom of your cooler, and freeze it overnight. This block of ice will last a lot longer than ice cubes. Another alternative is blue ice packs.

Once you arrive at the hotel, unpack your cooler into your room’s refrigerator. If you don’t have enough room, put the most important ingredients in the fridge and keep the rest in the cooler. You can run down the hall for more ice if necessary. To be safe, I put my dough in the bottom of the refrigerator. Heat rises, and I lost some dough that I had stored on the top shelf. Blew the lid right off .

The rest is up to you. Get a good night’s sleep, and in the morning pack your cooler and head for the competition. You’ll be excited and nervous, but just do what you do every day, make the best pizza in USA!