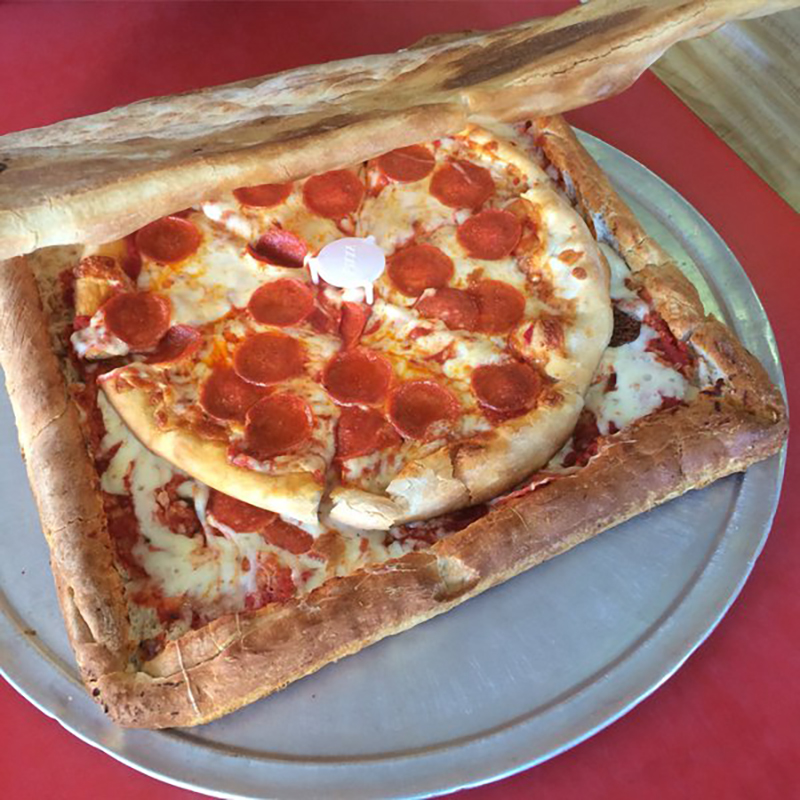 Leave it to Sean Berthiaume, the mastermind behind the awesome menu chalk boards at Vinnie’s Pizzeria in Brooklyn, to come up with this ingenious little oddity: an edible pizza box.

Berthiaume debuted his pizza box, which is actually made out of more pizza, last week on Twitter, and the Internet has been drooling over it ever since. “Introducing the PIZZA BOX PIZZA,” he tweeted. “A pizza box made entirely out of pizza! No waste, 100% pizza and 100% delicious.”

Jacob Petrera, another Vinnie’s co-owner, told ABCNews.com that the idea came about after the partners kept noticing cardboard boxes strewn around the streets and stuffed into trash cans. They were looking for a way to reduce waste, Petrera said, when Berthiaume hit upon his brainstorm. “He was like, 'Let’s just make the box out of pizza.’ It’s all him, he’s the man,” Petrara noted.

Berthiaume gave a similar explanation to NBCNewYork.com and added, “I thought, what if you can make something you can eat every part of?”

So what kind of box do you use to deliver a pizza AND an edible pizza box? Berthiaume hasn’t hit upon that idea yet, so, for now, they’re not actually delivering the pie. However, customers have reportedly flocked into the store for to-go orders, and the partners have been wrapping the pizza and the “box” in tin foil. “We’re selling out every day,” Petrera told ABCNews.com.

That’s not surprising, considering the online reaction to the pizza box pizza, which Berthiaume described in another tweet as “totally PIEodegradable.” National and local media outlets have covered it, from Time magazine and the Washington Times to Fox News and the Huffington Post.

Check out the article in Time here.