Taco Pizza is back at PizzaRev - PMQ Pizza Magazine 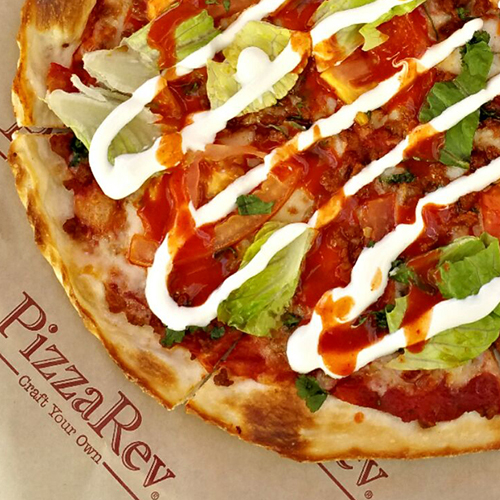 LOS ANGELES (May 5, 2015) – PizzaRev announced today that the Taco Pizza is back by popular demand. The award winning fast-casual pizza concept will feature the seasonal special throughout May and June at its 27 restaurants across California, Minnesota, Texas, Utah and South Dakota.

The Taco Pizza features PizzaRev’s original homemade dough, organic red sauce, all natural Italian cheese, chorizo, shredded greens, cilantro, tomatoes, sour cream and Cholula sauce. Guests can further customize their Taco Pizza with additional toppings, like jalapenos, onions or any of the spices and hot sauces from the “Rev it Up” counter.

PizzaRev’s seasonal pizzas feature new flavors and ingredients that aren’t typically found among the restaurant’s 30+ pizza toppings. Guests who didn’t get a taste of Taco Pizza last year can get a glimpse in this 15 second video:  http://bit.ly/1GPvtr5.

“Our version of taco pizza was a huge success last year,” said Nicholas Eckerman, COO and co-founder of PizzaRev. “The traditional taco flavor profile, coupled with the fact that guests can add any other toppings they wish, make it a winning combination.”

The process starts with the crust, either original or gluten-free. Guests then choose from four signature sauces, including a savory organic red sauce, a creamy Alfredo, and a spicy-sweet BBQ, and then top it off by choosing from a wide array of cheese, meat and veggie toppings. Each pizza is fired to a perfect, Roman-style crispiness in less than three minutes in PizzaRev’s 900 degree stone-hearth oven.

PizzaRev is an award winning fast-casual pizza concept that has reinvented the way America eats its favorite food. Guests are empowered to fully customize a personal-sized 11" pizza for one price. Homemade dough options, flavorful sauces, all-natural cheeses, and more than 30+ artisanal toppings, everything is on display at PizzaRev and assembled right before your eyes. The pizzas are then fired in a 900-degree, stone-hearth oven which produces a thin and crispy Roman-style pizza in just three minutes. Los Angeles-based PizzaRev was founded in 2012; the executive team possesses a combination of Fortune 500 operating experience and high-profile restaurant management.