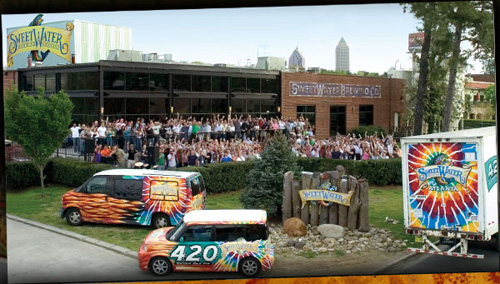 SweetWater Brewing Company continues its expansion north as it beings to flow in multiple metro area Maryland markets later this month. Celebrating i’s 18th anniversary this month, SweetWater – ranked as one of the nation’s Top 20 craft breweries by volume according to the Brewer’s Association – is primed and ready to begin flowing in The Old Line State. “Kicking off 2015 with a bang, we couldn’t be more thrilled to move on up to Maryland,” said Director of New Market Development Jeff Chassner. “The strong partnerships we’ve created with Kelly Distributors, Guy Distributors, Eastern Shore Distributing, Wantz Distributing, Bob Hall Distributing and Chesapeake Beverage, joining next month, will perfectly position SweetWater for massive growth throughout Maryland.” SweetWater has loaded up its most popular brews to bring into Maryland, starting with its flagship, 420 Extra Pale Ale, on draft at bars and restaurants, alongside bottles, cans and Tackle Box variety packs in off-premise grocery, package and specialty bottle shops including:

420 Extra Pale Ale – SweetWater’s 420 is a West Coast style pale ale with big hops and a crisp finish. First brewed on April 20, 1997, 420 is extremely well-balanced which makes it a perfect introduction to a new town – that’s why we say “drink ‘em if you got ‘em!” Rolling out in 6-pack bottles, 12-pack cans and draft.

SweetWater IPA – This mammoth India Pale Ale (IPA) is dry-hopped to the gills delivering a kick-you-inthe-teeth hop chop. The brew is unfiltered to leave all the natural flavors intact. Rolling out in 6-pack bottles, 12-pack cans and draft.

SweetWater Blue – SweetWater Blue is a unique, lighter-bodied wheat ale enhanced with blueberries. This ain’t no fruit beer, but it is our breakfast beer, and perfect for hanging on a warm Maryland day. Rolling out in 6-pack bottles and on draft.

Take Two Pils – A golden blonde German pilsner brewed with spicy floral hops and a head-first trip down the rabbit hole of lagers. Call us in the morning! Rolling out in 6-pack bottles and draft.

SweetWater Tackle Box – The SweetWater Tackle Box variety pack is a hefty 12-pack collection featuring three of SweetWater’s favorite year round brews, along with a fourth catch and release seasonal specialty in each box. Fans and curious sippers alike can meet and drink with a crew from SweetWater at sampling celebrations and sponsored events kicking off the week of February 15 and running through early March in the Easton, Frederick, Leonardtown, Salisbury and College Park metro areas. The Annapolis and Baltimore metro areas will get their first tastes on March 2. For the full schedule of events and participating locations, visit SweetWater’s Facebook page. Online fans can wet their whistles too by following the brewery’s Maryland Facebook page for details on how to enter SweetWater’s “Catch a Trout Tap” contest rewarding the first locals to spot their tap handles with free SweetWater Schwag. To learn more about SweetWater Brewing Company and its full lineup, visit www.sweetwaterbrew.com.