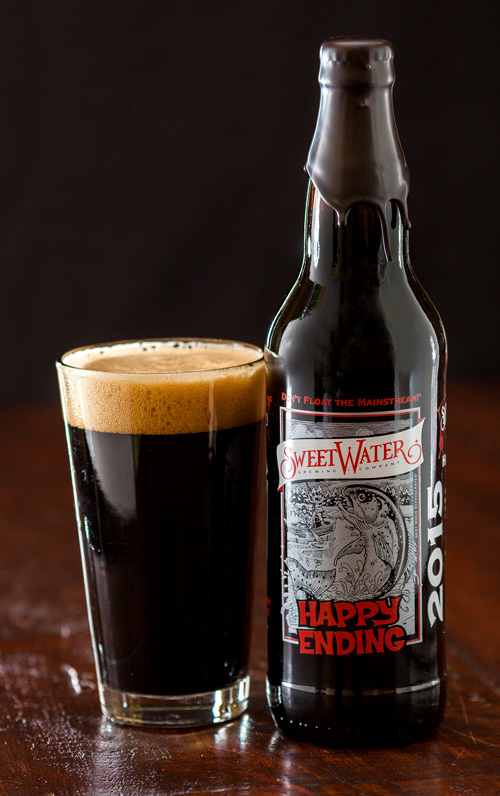 With a full on fast-paced year in the books, SweetWater Brewing Company is popped its last few tops of the year to toast 2015 with expansion plans, new brews, more sweet cans and even some cages. Also, as part of the brewery’s Catch and Release seasonal lineup of brews, Happy Ending returns to lucky lips early this month.

An Imperial Stout, Happy Ending is brewed with Centennial and Willamette hops and finished off with a dry-hop addition of Cascade and Simcoe hops. Measuring out to a whopping 9 percent ABV the brew, which took home a silver medal at the ’14 World Beer Cup, is sure to put a smile on your face. Happy Ending returns to coolers in six-packs, 22-ounce hand-waxed bombers and draft taps starting the week after Christmas.  Drinkers will be able to stock up through the New Year, but get ‘em while the gettin’ is good because this seasonal sipper while be gone by the end of February!

Meanwhile, SweetWater hit a few heady milestones in 2014, including a 33 percent annual volume increase, rounding out the year with 192,500-barrels sold. The shiny new cans of SweetWater 420 Extra Pale Ale and IPA accounted for 25 percent of total packaging sales of both of those brews for 2014. SweetWater fans who enjoyed the new cans in 2014 can look forward to more aluminum beauties from the brewery in 2015. To sweeten the deal, Take Two Pils will join the canning lineup in the New Year, along with a new all-can version of Tackle Box variety 12-packs. The backyard of Atlanta and favorite coastal fishing holes will receive the canned Tackle Boxes first, with the rest of the southeastern footprint to follow suit later in the spring. SweetWater will also be dressing up its lineup of bottles in 2015, debuting a brand-new 750 ml cork and cage line beginning with an 18th anniversary sour Belgian ale in February.

Looking deeper into 2015, the brewery will high-tail it out West in the first quarter of the New Year with the great state of Texas up first on the brewery’s expansion calendar. More cities and states will be announced as we float further into 2015. Mark the calendar for Sunday, Feb. 22 as SweetWater blows out the candles at its 18th birthday brouhaha with its brand new brew.  A handful of new Dank Tank brews will also be floating from the tanks in 2015, combining creativity, high-gravity and a little hint of the brewers’ dark sides. Click here for the 2014-2015 fishing calendar of beer releases.