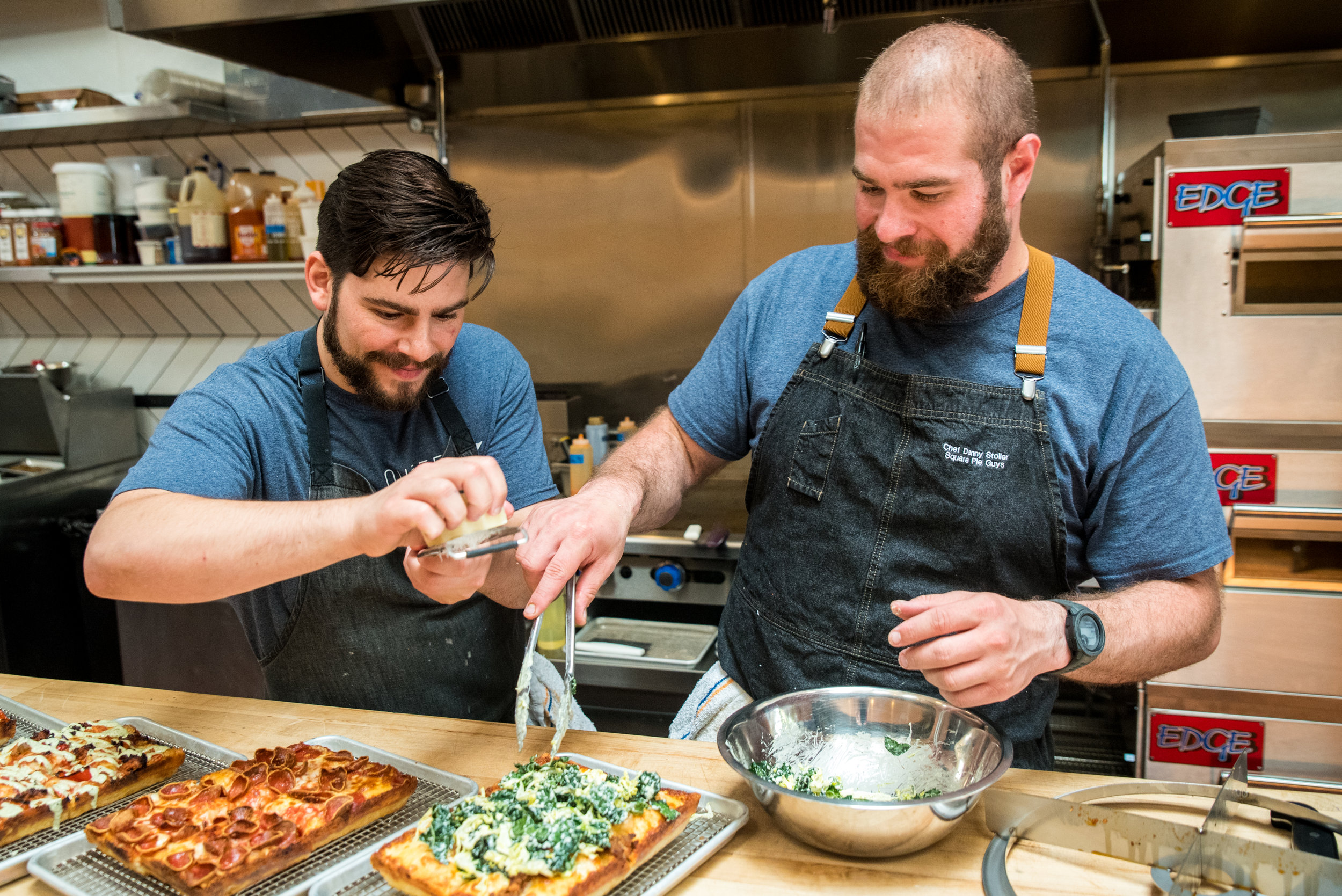 On July 16, the two founders and chefs of Square Pie Guys, have realized a long-time dream: opening their own brick-and-mortar restaurant.

Marc Schechter and Danny Stoller began as diehard pizza fans. Stoller is a chef with 12 years of experience at award-winning restaurants Tilith, Revel, and Luc. Schechter is a self-taught pizzamaker who spent his free weekends staging one-time dining events at hosting locations like Pizzeria Delfina, PizzaHacker, Del Popolo, and Casey’s Pizza. They teamed up to bring Detroit-style pizza to California, which began with a pop-up restaurant last March. The restaurant serves Detroit-style pies with unique offerings like Don’t Go Bacon My Heart, How Mush-room? and Mean Green Sausage Machine.

“After staging, we began working on our pizza technique together, using both of our kitchen backgrounds,” said Schechter. “The pop-up allowed us to hone in our recipes and techniques further, and get feedback from a growing audience of fans.”

When the pop-up started, they both had full-time day jobs and no employees.

“Marc made the dough and then we would work service together,” Stoller said. “When we started getting busier we added a prep cook for the dough and one other person to help during service. Sometimes it was a cook, sometimes a server, but mostly compromised of our friends and significant others.”

“So we were juggling quite a bit,” Schechter said. “From setting up vendors and the accounting, to running marketing campaigns, to strategizing our next pop-up locations – there was a lot to do, all the while prepping for the pop-up.”

They recently opened their new brick-and-mortar restaurant at 1077 Mission Street, San Francisco, with a full-time staff of 10.

“We’ve actually been really fortunate,” said Stoller. “We got our space from a local restaurant owner named Adam Mesnick, who owns the Deli Board in the neighborhood as well. He’s incredibly supportive and knowledgable, and that’s really made the transition much smoother. We both left our full-time jobs a few months ago, and it’s been a wild ride, but an exciting one.”

It takes grit to scale up from a pop-up to a brick-and-mortar location, but the co-founders said that Instagram and their fanbase played a large role in their success.

“Instagram has been a great platform for us to put the word out about our pop-up, our opening, and our Kickstarter,” Schechter said. “We’re super grateful to all of our fans, too, for helping spread the word on social (media). We cannot overstate how lucky we are to have such a loyal fanbase. They’re the reason we pushed so quickly to open our brick-and-mortar: they were stoked to visit us at the pop-up, they wanted us to cater, they wanted to get us on delivery. If it weren’t for their support, we never would have outgrown the pop-up and been able to take the jump into our own space. We’ve always dreamed of running our own enterprise but we never would have gotten here without their push, and their support.”

His advice to pizzeria owners on using social media: “The two most important things are engagement and authenticity. Your Instagram doesn’t have to be perfect, and it’s more important to post regularly than perfectly. Be yourself on Instagram, share what you’re doing, and always engage with and thank people who follow along and engage with your brand.”

The advice held true for the co-founders. The pizzeria held a successful opening night with nine Detroit-style pies to choose from as well as salads, sandwiches, chicken wings, and dessert.