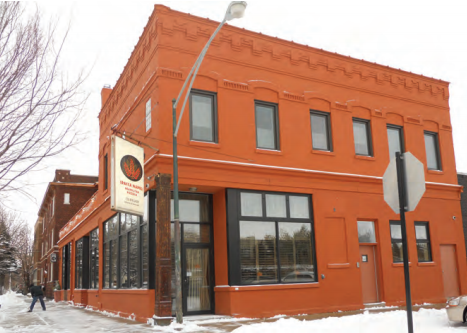 In all great cities, there are places between work and home where good food, friends and a glass of wine or two can revive the spirit. For a growing number of Chicagoans, that place is Spacca Napoli (spaccanapolipizzeria.com), a Neapolitan-style pizzeria at the corner of West Sunnyside and North Ravenswood Avenues, owned and operated by Jonathan Goldsmith, a former psychiatric social worker turned certified pizzaiolo. Since opening his pizzeria’s doors on Valentine’s Day 2006, Goldsmith has made it his life’s work to serve his customers scrumptious Naples-style pizza and, more importantly, show how food can bring people from all walks of life together at a dinner table.

For Goldsmith, the journey to pizza occurred in phases: First, he fell in love with traditional Italian flavors after a three-year residence in Florence while his wife, Ginny Sykes, a painter, concentrated on her art. Upon returning to Chicago in 1991, he worked in construction and real estate and became one of the first volunteers and later, a board member of the Inspiration Café—an organization for the city’s homeless population—but, with the support of his family and friends, embarked on multiple “walkabouts” in Naples, where he absorbed the culture and culinary methods of the food over the years. On his first trip, he concentrated exclusively on the hand motions of pizzaioli, how they stretched the dough and formed balls in their palms. He cites acclaimed Naples pizzerias such Da Michele (damichele.net), Starita (pizzeriastarita.it), Trianon and Di Matteo as four of the greatest sources for his inspiration. Today, his quest has clearly paid off: Spacca Napoli is the only pizzeria in the Windy City certified by the Associazione Verace Pizza Napoletana (AVPN), the Associazione Pizzaiuoli Napoletani (APN) and the Accademia Italiana Della Cucina. The pizzeria has been favorably reviewed in multiple national publications, including Bon Appetit, Food & Wine and The New York Times. But, beyond praise and authenticity, Goldsmith embraces his business philosophy of placing an emphasis on creating a comfortable atmosphere for guests. “The notion of coming together at the table is the essence of what we do,” he explains. “We see the whole cycle of life in here. We have six-month-olds sucking the crusts and older people coming in to eat. To me, everyone is the same when they come in here. People need little stops that allow for meaningful actions. I see the pizzeria as offering that.” 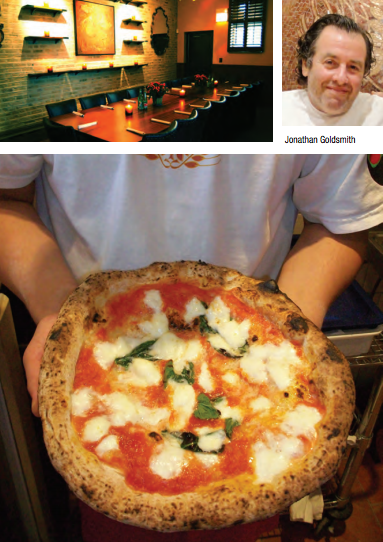 A 1,000-square-foot expansion in 2009 added 40 seats and a private dining room; the store shares a space with Sykes’ loft painting studio and draws on many Naples-inspired decorations that show the fusion of the couple’s passions for art and pizza. The terra-cotta floors feature artisanal tile work incorporated into the design, and the walls are lined with Italian photographs and paintings—many by Sykes and others passed along from family collections.

However, the kitchen is where even more measures have been taken to honor classic methods. The oven at Spacca Napoli—also decorated by Sykes (among other artists) with the image of wheat taken from an ancient Roman coin—was custom-built by third- and fourth-generation artisans from Naples. All materials were carefully selected and shipped from Italy to Chicago. The oven typically burns at about 850˚ and pies cook in 60 to 90 seconds. “The form of the oven is identical to what you could have seen in Pompeii more than 1,000 years ago,” Goldsmith explains. “I had roughly 14,000 pounds of material brought over. There are three types of brick, three types of sand and special concrete, and then there are special steel pieces that form and frame the oven. When I had things structurally ready to build, I had the builders flown over, and it was built in around seven days.” Meanwhile his “diving arms” mixer helps ensure the dough is stretched gently for a soft pliable result. “It’s a beautiful machine,” he says. “It could be in the Museum of Modern Art. It replicates the hand movements of bakers reaching down and pulling up the dough.”

Many of the Naples pizzerias that inspired Goldsmith serve only a handful of pie varieties, but Spacca Napoli offers 12 pizzas on the menu. The selection is a product of his travels and suggestions from pizza-savvy customers and friends. “Whenever I’m in Italy, I’m like the Terminator: I zoom in and lock on to new choices,” he explains. “The last time I was there, I borrowed a bicycle from my hotel and visited pizzerias with just a pen and paper. Whenever I see an ingredient or a combination I’m not familiar with, I write it down so I can try it out.”

Back home, no expense is spared when stocking ingredients. Goldsmith and his pizza makers use the most authentic and freshest ingredients available. The tomatoes, oils and many of the cheeses are imported from Italy. While acquiring Italian salumi can be challenging, he maintains quality by purchasing many of the meats from an Italian-style salumeria in New York. Among the bestselling pizzas on the menu are the Bufalina, a simple combination of basil, mozzarella di bufala and olive oil; the Prosciutto e Rucola, with Provola cheese, prosciutto di Parma, arugula and Parmesan; and the Salsicciae Broccoletti, topped with Italian sausage, rapini and fi or di latte mozzarella. Still, the menu changes with the seasons. “We work with whatever is fresh at the moment, whether it’s ramps in the spring, when the leeks come after the snow, or zucchini flowers in the summer,” he explains. “My favorite foccacia has ramps, anchovy, olive oil and rosemary. We also make a pie with zucchini blossoms where we bake squash and fold into it ricotta di bufala, top it with peppers and artichokes, and then we incorporate the zucchini flowers, stuff them with ricotta, put them in the fryer and top the pizza with them.”

Despite the uncertain economy and rising food prices these past few years, Spacca Napoli, like many other mom-and-pop pizzerias, has remained fortunate and embraced by the neighborhood. Goldsmith has seen customers opt for a less expensive bottle of wine or pass on salad or antipasti,
he says, but sales have continued to grow nonetheless—by as much as 10% each year. Proud of the level of service his pizzeria offers, he points out that many of his employees have been with him since the doors first opened—he considers them family. The 2009 expansion was in response to wait times that often neared an hour and a half. Goldsmith can only attribute this demand and growth to his personal philosophies on business and pizza, which are essentially intertwined: Offer good service, serve good food, love your work and make sure everyone feels welcome when entering your store. “When the garbage man comes by in the morning, we invite him in for an espresso, and in the summer, we save the Parmesan rinds for people whose dogs have strong stomachs,” he explains. “I consider myself a baby in the world of pizza. I’m still learning, and I will be until I die. It’s my wish to try and replicate the tradition. I have no need or desire to change the dough or fuse different styles together. I’m so excited about what I’m doing right now. I truly love being here.”