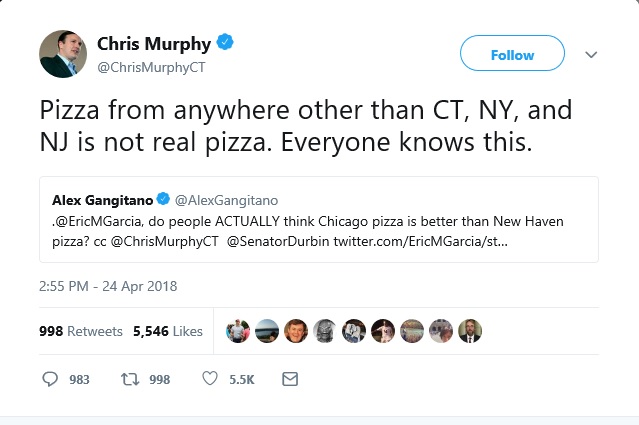 There are certain topics that will always get you in hot water. One is "mama" jokes, and the other is telling someone that they live in a place with no "real" pizza.

The latter is what happened on Tuesday, when Connecticut senator Chris Murphy (@ChrisMurphyCT) tweeted: "Pizza from anywhere other than CT, NY, and NJ is not real pizza. Everyone knows this," in response to a tweet posted by @AlexGangitano, which said, "Do people ACTUALLY think Chicago pizza is better than New Haven pizza?"

Since the comment went live, Murphy's post has been retweeted nearly 1,000 times and received just as many comments ranging from those agreeing with him to those professing their love for Chicago-style and Detroit-style pizzas.

It's great to see so many people standing up for all the pizza styles and states out there.

Maybe after this Chris Murphy will try a few more pizzas.