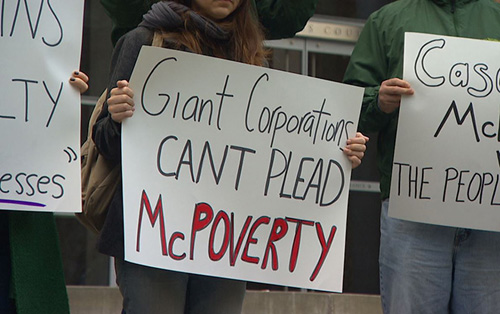 Starting April 1, Seattle’s controversial $15 minimum wage law goes into effect. Initially, for businesses employing more than 500 people, the law mandates an $11 minimum wage while employers with less than 500 can offer $10 with $1 made up by tips or payments to medical plans.

Seattle’s City Council, which passed the ordinance in June, 2014, is giving employers from three to seven years to meet the $15 mark depending on their size.

The restaurant industry is among those economic sectors predicted to be the most influenced by the law change. With restaurant margins already thin, Seattle restaurant operators say higher revenue solutions must be found to compensate for the wage increase. Researchers predict restaurant prices will increase 4% to 5%. Other possible actions by Seattle restaurants include lay-offs, reducing employee hours or closing restaurants entirely.

Restaurant franchisees, including Domino’s, Pizza Hut and Subway, say they’re mandated to pay the full $11 wage because of their association with nationwide companies. Independent pizzerias, with traditionally small work forces advancing on-the-job, will have to cope with the ordinance — but some operators say they already compensate their team above the new standard. “I pay my two employees $11.49 plus tips,” says Marc Russell, who has owned Post Alley Pizza in Seattle for three years. “I think it’s only fair that billion-dollar businesses like Wal-Mart and McDonald’s should pay their employees a $15 minimum wage. Smaller companies, including independent restaurants, will be challenged. But people like me are in this business to have fun — not to get rich.”

According to the March 4 Seattle Magazine, there has been a “rash of shutterings” in the local restaurant world. Various restaurants throughout the city have closed in the months leading up to the law change, but many owners claim their shut-downs have nothing to do with the new minimum wage. When contacted, restaurateurs claimed that their closings mostly had to do with location or a need for expansion.

Washington Restaurant Association (WRA) has been vocal in opposing the new minimum wage. “At the end of the day, the math of the industry has to change,” said WRA CEO Anthony Anton. “Seattle will have to invent a different restaurant model than the historical one.”

Some changes have already been made in wake of the new law, including tips being automatically included on checks and in wages. “It’s nothing to be afraid of, it’s just something to be aware of. There will be changes, but we’ll make them, and we’ll figure it out,” Anton says.