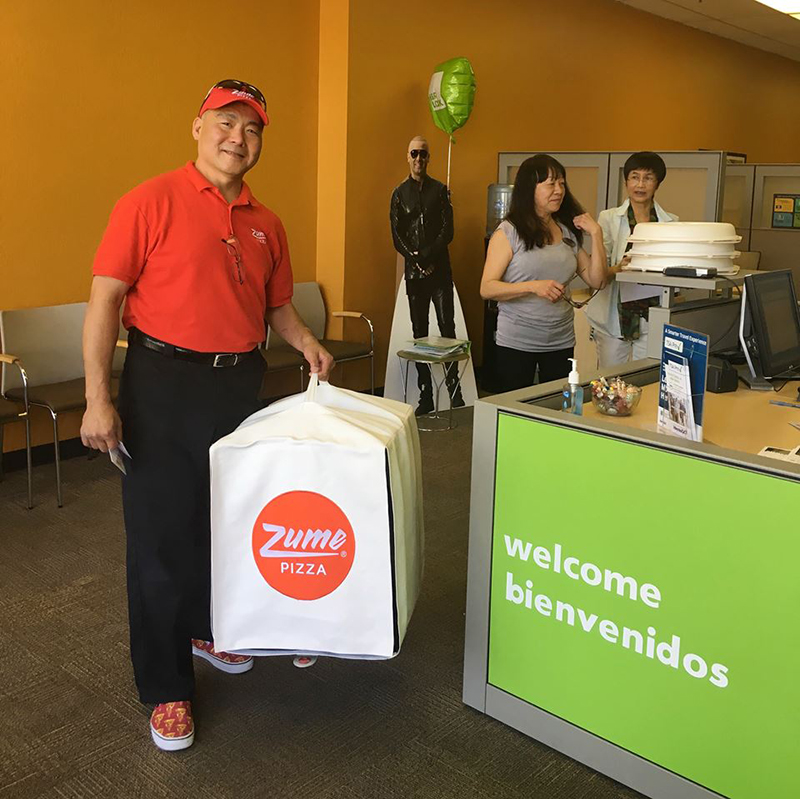 Looking for the perfect pizzeria employee? Alex Garden, co-founder of Zume Pizza in Mountain View, California, has built his own from scratch, with a little help from a global team of robot makers and engineers.

A pair of specially designed robots make the pies at Zume Pizza, which aims to be “the Amazon of food,” according to Bloomberg.com. Garden has developed a pizzeria concept that eschews the human touch entirely, focusing instead on pizza-making machines and patented trucks that actually bake the pizzas en route to delivery.

Zume sold its first robot-made pie in April. A robot named Marta—actually a robotic arm without a body or face—sauces the pies while its partner Bruno pops them into the oven. Currently, humans handle the toppings and cheese, but the long-term plan is to make the process entirely automated.

Zume also hopes to roll out a fleet of delivery trucks with remotely controlled ovens pre-loaded with pizzas. As Garden explains his  plan to Bloomberg, “The robots will load all these individual ovens with different menu items. Then the truck will circle the neighborhood. At precisely 3 minutes and 15 seconds before arriving at the customer’s location, the cloud commands the oven to turn on and, BOOM, the customer gets a fresh, out-the-oven pizza delivered to their door.”

That plan is still under review, however, and must be approved by the Santa Clara County Health Department. In most states, food trucks aren’t allowed to cook food while in motion.

Interestingly, Zume’s website makes no mention of its robotic staff, and the company’s Facebook page focuses largely on the human element, featuring photos of flesh-and-blood employees, along with delicious-looking pizzas, the company’s heavily branded delivery cars and its green packaging made from recyclable 100% sugar-cane fiber.

But Garden expressed confidence that his company—which has caught the attention of investors from Google Ventures and Yahoo, Inc.—will soon give the major chains a run for their money. “Just imagine Domino’s without the labor component,” he said. “You can start to see how incredibly profitable that can be.”

But Pizza Hut and Domino’s have both been experimenting with robots of their own. Domino’s Australia has a robotic delivery vehicle, while Pizza Hut is working on a robotic cashier. Thus, many analysts doubt that Zume can make a dent in the mega-chain’s sales any time soon. But Adam Martyn, an employee at Stanford University, is sold on the quality of Zume’s pies. According to Bloomberg, he orders the company’s Lucky Bueno artisan pie—made with roasted garlic, Calabrian chili and soppressata—every two weeks for $18. “The robots are cool, but I order because it tastes good,” he said.

Click here to watch a full video of Zume's pizza robots in action.