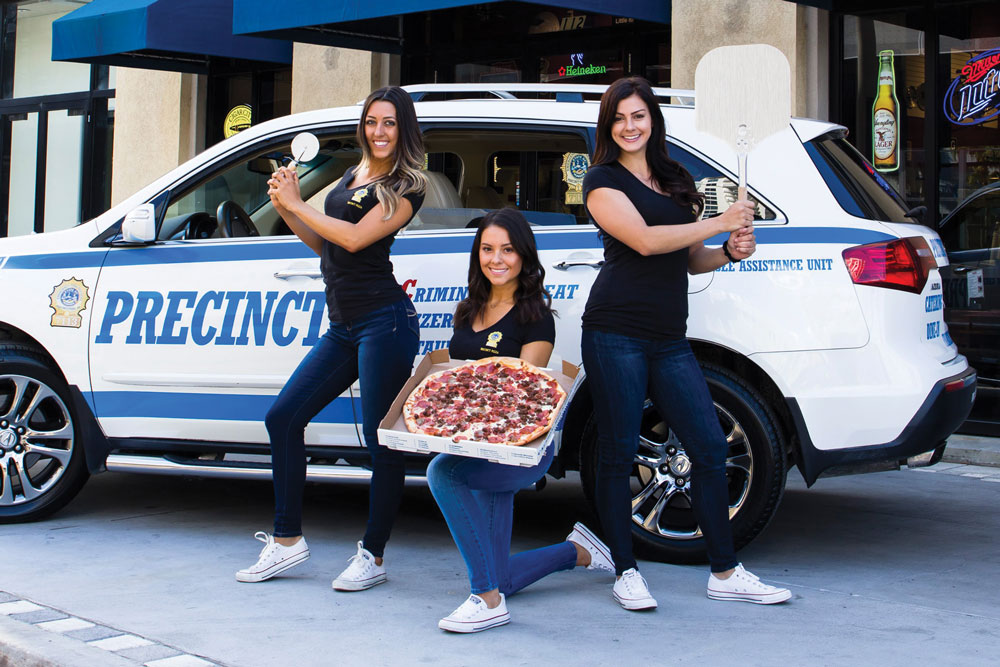 When he was a younger man working for a Domino’s Pizza store in the late 1980s, Rick Drury, owner of the two-location Precinct Pizza in Tampa, Florida, admits he was a “terrible employee” who thought he knew more about running a pizzeria than his bosses. Turns out he was right. But he had to break a lot of rules to prove it.

After taking over a struggling Domino’s franchise in Long Island, New York, Drury flouted the corporation’s specifications and bucked a cookie-cutter system that stressed low food costs over quality—and quadrupled the store’s sales in just six months. He went on to launch one of the busiest independent pizza restaurants in the country, with a hip, young “mod squad” of employees and catering clients that range from local schools and daycare centers to Paul McCartney, Taylor Swift, Garth Brooks and Lady GaGa.

Few independent pizzeria owners today know more than Drury about how to compete with the big chains. And now he’s ready to impart his wisdom to others as he looks to franchise the Precinct Pizza concept.

“I went to the local market and bought fresh beef and other meats and fresh vegetables rather than use the toppings Domino’s sold to us and required us to use. I knew this was a big no-no, but it was necessary to prove that quality did matter.”
— Rick Drury, Precinct Pizza

Drury has always been a man torn between two passions—pizza and saving lives. He started delivering for Domino’s as a college student, but he’d set his sights on a career as an emergency medical technician. That changed (temporarily, at least) when a Domino’s corporate executive showed up one day, fired everyone for employee theft and took over the shop. “Since I’d just started working there, he allowed me to stay and promoted me to assistant manager on the spot,” Drury says. “I wasn’t going to argue with a guy making pizza in a three-piece suit.”

After moving up to a manager’s position, Drury quickly rose to superstar status in Domino’s. “I was one of the fastest pizza makers in the Northeast and was tasked with turning around underperforming stores,” he says. “I had a knack for evaluating a store’s problems and rectifying them quickly.”

In 1995, he bought his own franchise on Long Island, and he and his wife, Jessica, who had no previous pizzeria experience but proved to be a fast learner, set about reviving its fortunes. “When I purchased it, the store was doing about $4,500 a week and was ranked 18th in sales out of the 34 stores on Long Island,” he says. Within six months, the store was raking in more than $20,000 per week and had rocketed to No. 3.

Drury credits the sales boom to five changes, most of which would work for any operation, chain or independent:

“If you don’t know the nutritional value for your pizza and can’t show how it was calculated, you will probably have a tough time getting schools to consider your pizzeria for a lunch program. The chains have this information, and it gives them a step up in the process.”
— Rick Drury, Precinct Pizza

Despite his dramatic success with Domino’s, Drury had his share of disappointments with the company. When one of his former managers opened a franchise and started delivering in Drury’s territory (and even tried to steal away a school lunch account), Drury says corporate management offered little support. Things got worse when Papa John’s moved into the area. “I kept telling them this new company—which no one had heard of at the time—was growing fast and was not making the mistakes Domino’s made as it grew. No one believed me, so I put my stores up for sale.”

Drury went back to his first love: working as an EMT. He’d only been on the job in New York for a month when the Twin Towers fell on September 11, 2001. To make room in the nearby hospital for attack victims, he and other first responders spent hours transporting stable patients to another facility in Nassau County, then made their way to Ground Zero to help search for survivors. (See sidebar at left for more details.)

Traumatic as that experience was, Drury loved his work as a paramedic and took another job in what he describes as “the busiest ambulance in all of New York City, seeing the most interesting and traumatic calls an EMT can ever see.” But he had also begun suffering some breathing problems after 9/11, and, once his parents retired and moved to Florida, New York began to feel less and less like home. Soon, he and Jessica pulled up roots, moved to the Sunshine State and dreamed up the Precinct Pizza concept.

Drury will be the first to tell you that location has been key to Precinct Pizza’s success. Situated in the Channelside complex in the downtown Port of Tampa, the restaurant is nestled between the Florida Aquarium and the Amalie Arena, which hosts concerts, sporting events and more. “I knew we’d be busy from just the location, but the theme of the restaurant was just as important,” Drury says.

As a former New York City first responder, Drury knew how to create a Big Apple atmosphere that resonated with customers. He and his wife decorated the space with authentic New York police, fire and emergency medical service memorabilia as well as replicas of street signs and photography commissioned specifically for the restaurant.

Precinct Pizza threw open its doors on August 7, 2006, and hauled in $20,000 in its first week, Drury says. “We never had a grand opening or advertised our opening, since it was difficult to handle the volume from day one. In nearly 12 years, we’ve had 11 positive sales years, with the exception of 2010, when the BP oil spill hurt our sales in the summer tourist season.”

Drury had little need for standard marketing techniques like direct mail or TV and radio ads. Instead, he went out into the community and made friends—the kind of friends that are good for business, like school administrators, operators of daycare centers, church leaders and hoteliers. He developed sales brochures for catering and school lunch programs and personally pitched potential partners.

“I developed a full-color brochure explaining why Precinct Pizza was the best choice for their school lunch program,” Drury says. “It included a detailed spreadsheet showing a nutritional analysis of our cheese and pepperoni pizzas, broken down per slice, and how ours compared to all the chain pizza companies in the area.”

Nutritional data is required for schools involved in the U.S. Department of Agriculture’s National School Lunch Program, Drury notes. “If you don’t know the nutritional value for your pizza and can’t show how it was calculated, you will probably have a tough time getting schools to consider your pizzeria for a lunch program. The chains have this information, and it gives them a step up in the process.”

It takes persistence to persuade a school to drop its partnership with a chain pizzeria. “I went to one school year after year, with the door slamming in my face every time,” Drury says. “They kept saying they were happy with the chain pizza they were getting. I said, ‘All I want is a chance.’ I asked how many pizzas they were ordering. They said 80 to 90 each time, once a week. I said I would do it once for free, just to prove we were a better alternative. After the kids had our pizza, they demanded that the school change to us in the future. The school saved $400 that week at $5 per pizza, and all I had to do was spend about $150 in food to gain that account.”

“Sometimes, it’s just a matter of timing,” he adds. “Never give up. Administrators change. Programs with other pizzerias go sour, and you just may be contacting them at the right time.”

Opening his second store earlier this year has proved a greater challenge. The new location has a smaller population and fewer businesses to target. To market this store, he has used direct mail, aggressive couponing and door hangers. He also quickly secured lunch business with a local school, which “has created goodwill in the community, helped build brand awareness and helps with our cash flow.”

Delivery is a big moneymaker for both stores. Never afraid to experiment, Drury has tested several third-party delivery companies in addition to employing his own team of drivers. The goal was to maximize delivery sales without hiring more drivers, but companies like UberEats, Amazon Prime Delivery and Postmates didn’t measure up. “We just had too many complaints about cold food, since none of their delivery people had anything to keep the food hot,” he says. “They were often unprofessionally dressed and even rude to our staff, with no concern for the quality of the food.”

Drury now uses just one third-party company—BiteSquad. “Their drivers all have clean uniforms and insulated delivery bags and are professional,” he said. “Along with our own in-house delivery service, it works well.” He also works closely with his POS provider to build a better system for tracking orders. “We’re constantly improving the layout and design features to make the system stronger and to prevent credit card fraud,” Drury says.

Meanwhile, Precinct Pizza began offering franchise opportunities last year, but Drury is picky about his partners. “There have been a few people interested, but no one that we feel would be a good fit with us,” he says. “We will not approve someone just because they have a check in hand. When someone becomes our franchisee, they’re our business partner, and we will do everything we can to support them and ensure their success. If they fail, we fail. I’d rather sell two franchises that succeed than sell 20 and see 10 fail.”

Some days Drury misses the high-stakes pressure of saving lives on the streets of New York, but his restaurants keep him plenty busy. “I’m a delivery driver, pizza maker, oven tender, salesman, manager, server, hostess and dishwasher,” he says. “Whatever my squad needs, I will support them.

“At my age, I just don’t know what else I would do—that I know I’m good at and can make a good living at. I found that I was a terrible employee, because I always felt I knew better than my bosses. So working for myself is best. There are more headaches, but at least I know they are headaches of my own design, not created by others.”