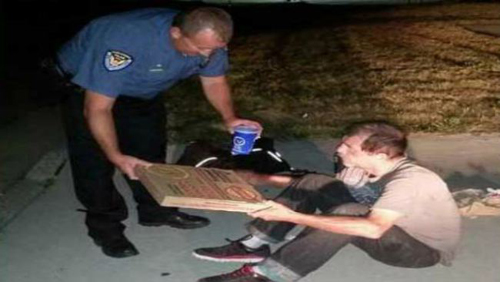 Police officers have been criticized a lot this year for using excessive force, but a Middletown, Ohio, cop is in the news for using just the right amount of compassion to bring a homeless man a hot pizza.

WKBN.com quotes Chief Rodney Muterspaw saying he wasn’t surprised that one of his officers delivered a pizza to a homeless man. Middletown Officer Jason Deaton was recognized on the police division’s Facebook page September 9 after he delivered a pizza and a drink to a man sleeping on the streets. Deaton's act of kindness was "nothing new," adds Muterspaw. Muterspaw says his officers have delivered holiday food and even bought Christmas gifts for families in need.