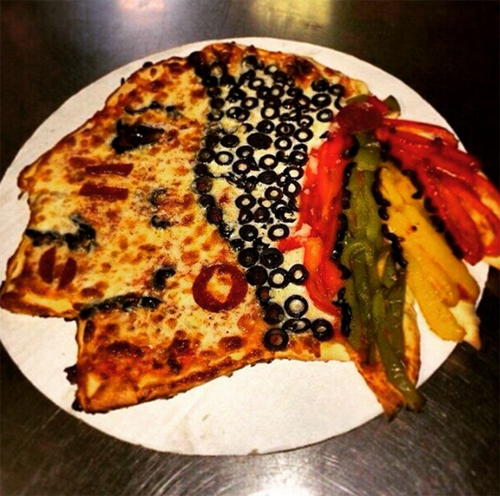 It's a perfect time to be a Chicago pizza lover and Blackhawks fan now that the hockey team won the Stanley Cup and Punky's Pizza in The Windy City made some real dough with its Blackhawks logo-decorated pizza promotion. Talk about big pizza bucks. This article dishes the stats on pizza's popularity, including our favorite food's status as the No. 1 ordered online munchie. The growing Wisconsin-based chain Toppers learned during their early years that octopus pizza is not one of those fresh food items in great demand.

Joe Walker is a force in the pizza business in South Carolina, and his success may be traceable to his military role in U.S. combat forces in Iraq. A Slice of Hope is more than a great way for pizzeria operators to feed the hungry–it's an opportunity to restore the human spirit. Simon Cowell's face on a pizza may not inspire your paternal instincts, but he is part of a British grocery chain's Father's Day promotion featuring pizza portraits of famous dads. Think of them as pork torpedoes targeted toward your tummy. Pizza Hut's Hot Dog Bites Pizza debuted this week and the foodies at the Dailybeast.com give it a thumbs down.

It's not a new pizzeria, but Gatti's Pizza has new ownership after the Texas-based chain was acquired by Sovrano LLC.