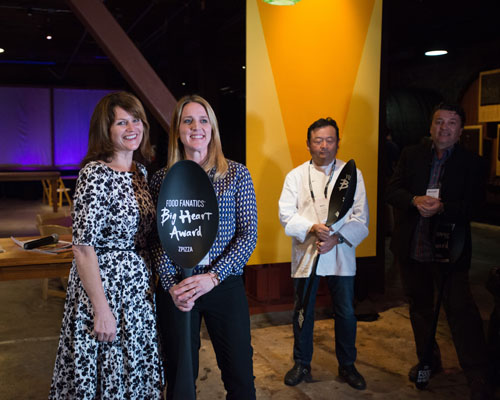 The artisan pizza chain launched Nice zSlice in recognition of October’s National Bullying Prevention Month. Teachers from more than 200 schools nationwide partnered with local zpizza restaurants, rewarding students who showed kindness to others with free slices of pizza. The company launched the program last year and distributed nearly 100,000 Nice zSlice awards to schools around the country. zpizza also hosted pizza parties and provided program materials for the educators, including posters that encourage positive behavior, parent communication letters and tips on how to address bullying and reward students in the classroom. 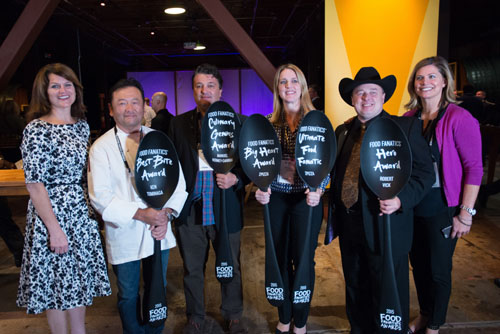 As the Ultimate Food Fanatic Award winner, zpizza will receive a $10,000 credit at US Foods Culinary Equipment and Supplies for a pantry or kitchen makeover. Pictured at right, US Foods' Sopinka and Jennifer Paulson, far right, pose with Food Fanatics awardees Chef Ken Tominaga of PABU; Chef Manuel Verney-Carron of Manuel's Bread Cafe; George; and Robert Vick of Vick's Vittles. The award was announced at reThink Food, a conference co-presented by The Culinary Institute of America (CIA) and the MIT Media Lab at the CIA’s Greystone campus in Napa Valley.

“Being a Food Fanatic is so much more than having a love of food—it’s about having passion and drive to do something greater for the industry and our communities,” said Marshall Warkentin, senior vice president of marketing at US Foods. “The way zpizza is tackling a big issue like bullying shows they not only have a big heart, but deserve the Ultimate Food Fanatic Award, and the public clearly agrees.”

According to DoSomething.org, more than 3.2 million students are victims of bullying each year, and nearly one in 10 drop out of school due to repeated bullying. The Nice zSlice program is designed to help reduce those numbers by rewarding kids for positive acts of kindness. “The Nice zSlice program gave us a great opportunity to recognize students for being upstanders,” said Judy Montgomery, principal of Matsuyama Elementary School in Sacramento, California. “Last year, we had a zpizza party for more than 40 kids who earned the Nice zSlice award, and the kids loved it.”

The Food Fanatics Awards program, designed to shine a spotlight on the heart and soul of the food and restaurant industry, received nearly 1,000 entries.  These inspiring stories were then narrowed by regions among six creative categories: Best Bite, Culinary Genius, Hero, Epic Turnaround, Top Crew, and Big Heart.  From there, an esteemed panel of judges chose the category winners and the public then voted online to select the one Ultimate Food Fanatic Award winner. zpizza prevailed as the Food Fanatics Awards Big Heart winner.

“The Food Fanatics Awards program generated impressive entries that reinforce the dedication it takes to succeed in the industry, said Toni Sakaguchi, executive chef of the CIA’s Strategic Initiatives Group, who served as a judge. “It’s a privilege to be involved in such a great program that features outstanding food people across the country.”

To learn more about US Foods and its Food Fanatics, visit usfoods.com or foodfanatics.com.