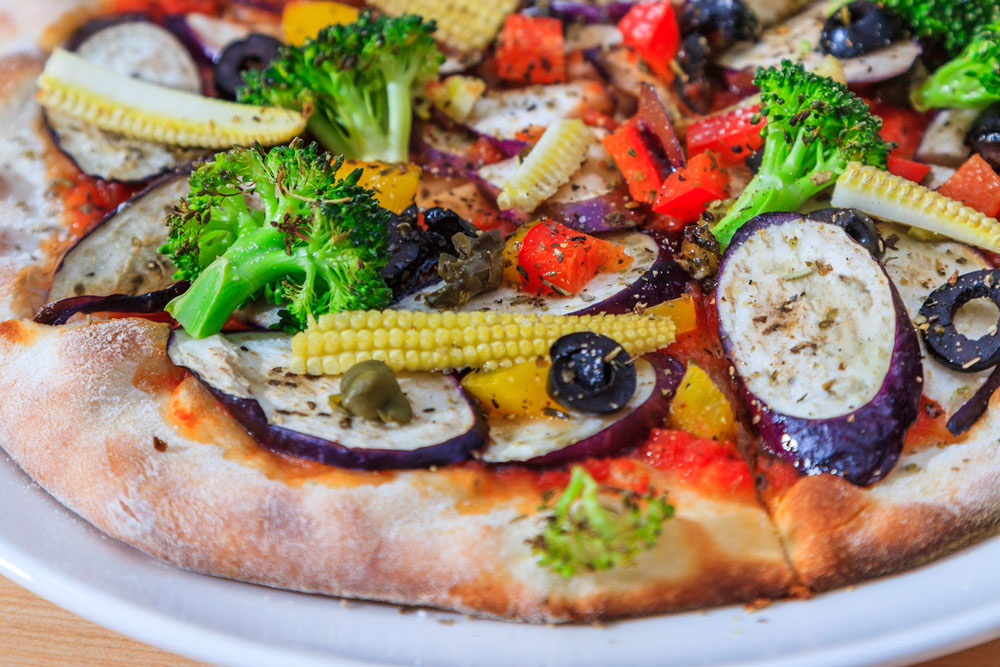 Just a couple of decades ago, gluten-free (GF) folks didn’t have many choices for eating out—and when they did, they didn’t expect much in terms of quality. My, how times have changed. With the advent of new flours, outside-the-box crust alternatives and increased competition for the GF dollar, these diners have more options than ever. In other words, it’s not enough to slap a gluten-free pizza on the menu; it has to be better than your (growing number of) competitors’ fare.

GlutenFree.com reported last January that “although more than 25% of people in the United States follow a gluten-free diet, the foodservice industry is still falling short when it comes to accommodating their dietary needs and preferences.” In fact, the site’s recent survey of 250 consumers found that 77% felt foodservice outlets were not doing enough for GF customers. But pizzerias are a notable exception, the report stated; indeed, even the big boys, including Domino’s (dominos.com) and Pizza Hut (pizzahut.com), have hopped on the bandwagon.

The good news is, with a little creativity and experimentation, you can make flavorful crusts that meet the needs of your GF customers—and send them running to tell their friends and family. “We’ve found that eating GF has endless possibilities if you’re willing to think outside the box,” notes Amir Razzaghi, manager/owner of Seattle-based RAZZíS PIZZERíA (razzispizza.com). “While we specialize in making gluten-free crusts with a traditional crispy, chewy, breadlike consistency and flavor, there are many other delicious options.” Read on to explore some ways you can start thinking outside the (traditional) crust.

According to the Celiac Disease Foundation, many grains and other starch-containing foods are naturally GF, including rice, corn, soy, potato, tapioca, sorghum, quinoa, millet, buckwheat, amaranth, teff, nuts and certain oats. Any of these may be used in GF pizza recipes via alternative flours, which have become increasingly available in recent years.

Razzaghi has experimented with many of them. Years ago, when he first started developing the GF crust that’s so popular at his pizzeria today, he sampled amaranth, rice, millet, quinoa and corn flour. Amaranth made the dough heavier and a bit soggy, he learned, while rice made it a little too crispy. Millet didn’t hold together well. Quinoa created a wet, heavy dough and added a slightly unpleasant flavor (as did amaranth). Corn was an allergen for some of his longtime customers, so it was out, too.

Ultimately, he decided to keep it simple, using only two flours in his “very allergy-friendly” pizza crust: organic sorghum and tapioca. “Sorghum is a godsend for us GF folks; it creates a white flour dough with a similar texture to all-purpose flour,” he explains. “Tapioca helps bind and adds a crispiness to the crust, as well as a hint of sweetness.” Some of his crusts are prepared with fresh yeast, while some are yeast- and sugar-free.

Seeking a heartier style? Recently, at America’s Test Kitchen in Brookline, Massachusetts, recipes have been carefully tweaked for its new cookbook, The How Can It Be Gluten-Free Cookbook Volume 2. Its Classic Cheese Pan Pizza recipe uses a generous amount of oil in the dough, as well as in the pan, to give the crust extra richness while crisping the bottom, notes Susan Hershberg, associate director of publicity at America’s Test Kitchen. “We decreased the amount of yeast slightly,” she adds. “Although we usually add the sauce and toppings before baking the pizza, we found that they weighed down our gluten-free crust and made it soggy, so we bake the crust first and let it cool before topping it.” The recipe uses a specially developed all-purpose GF flour blend, consisting of white rice flour, brown rice flour, potato starch, tapioca starch and nonfat milk powder.

Carol Kicinski, editor-in-chief of Simply Gluten-Free Magazine in Dunedin, Florida, also created her own GF flour blend, a combo of white rice flour, sweet rice flour, potato starch and tapioca starch, with xantham gum to bind the dough. To obtain extra springiness and texture, she adds unflavored gelatin to her dough recipe. Just be aware, however, that gelatin, is forbidden for vegan or vegetarian diners.

As a GF diet devotee for 20 years, Kicinski views pizza from the customer perspective. “Some pizzerias do it better than others, but I’ve noticed that many successful ones receive their dough from a supplier specializing in GF pizza dough or crusts—we gluten-intolerant consumers will always ask about their protocol,” she says.

Hence, if you do buy dough that needs to be rolled out, keep in mind GF customers will be wary of cross-contamination. “One pizzeria I know rolls out its GF and traditional dough with rice flour so that no traditional flour floats in the air, and they found it made no difference in their gluten-containing pizzas while making the GF pizzas safe,” Kicinski notes. “This makes good sense, unless you’re a dedicated GF pizza restaurant.”

To avoid cross-contamination, high-quality premade crusts are also available. Kicinski points out these can be beneficial for alerting kitchen staff; when an employee has to unwrap a special crust, he’s more apt to proceed with caution. “Premade crusts can be just as good as homemade,” she says. “When you purchase dough, it has that fresher quality, but there are excellent premade crust options now, such as Udi’s or Smart Flour Foods, which combines grains (sorghum, amaranth and teff) for its premade crusts.”

Though Razzaghi uses housemade crusts for his own operation, he does supply other restaurants with his premade crusts. “They go through them fairly quickly,” he says, “so I think using premade is fine when you source it well.” If you’re not sure about which premade crust or dough to stock, why not invite in a local gluten-free support group for a free blind taste test in exchange for their feedback? You’ll make a more informed decision and build buzz with this very loyal group of customers.

The Power of Cauliflower

At Isabella Gourmet Foods, a boutique artisan grocery in downtown Santa Barbara, California, one locally made new product is flying off the shelves: Outer Aisle Gourmet’s GF cauliflower pizza crust. Can people really be that excited about a veggie-based crust? “Our customers have been obsessed with it for its texture, flavor, and ability to hold together pre- and post-bake,” raves Amy Isabella Chalker, owner of Isabella Gourmet Foods. “Many cauliflower pizza crusts are crumbly and fall apart easily, but this one has structural integrity; it’s bound together with egg whites, cottage cheese and Parmesan, and cauliflower makes up 80% of the ingredient content.” In fact, a nearby pizzeria, Gino’s Sicilian Express (ginospizzapies.com), noting its popularity, now allows customers to bring in these purchased crusts for custom GF pizzas.

Razzaghi has also made pizzas from cauliflower/cheese blend crusts, zucchini and roasted eggplant and has found they offer a variety of tastes and textures. His personal favorites: cauliflower/cheese and eggplant. “With the cauliflower and cheese, you get a chewy, cheesy texture that perfectly complements most pizza toppings; adding garlic and herbs gives it a burst of flavor,” he says. “When the eggplant ‘crust’ is done right, it’s also a great complement to various pizza sauces and toppings. It’s nothing like a traditional crust, but it would make a fantastic appetizer or party hors d’oeuvre. And a zucchini crust reminds me of Okonomiyaki, a Japanese pancake.”

Kacinski enjoys making vegetable-crust pizzas at home, but she prefers pizzas that are as close to the “real thing” while dining out. However, she notes that these kinds of pizzas can be a big hit with Paleo dieters, who shun grains of any kind. “These pizzas are tasty, but they’re not like regular pizza,” she says. “For those who go grain-free, you can do an almond flour-based crust, which comes a little closer to traditional pizza.” Kacinski has also experimented with thinly sliced eggplant, crisped in a frying pan, topped with pizza toppings.

Exploring and experimenting with GF alternatives may take some time and effort, but pizzerias that pull it off have enjoyed impressive revenue increases and die-hard loyalty. “We’ve been quite successful with our crusts, calzones, baguettes, focaccia, dinner rolls and more,” Razzaghi concludes. “Some customers drive from British Columbia and surrounding states just to have dinner or celebrate their occasions at our pizzeria. That is incredibly special to us.”