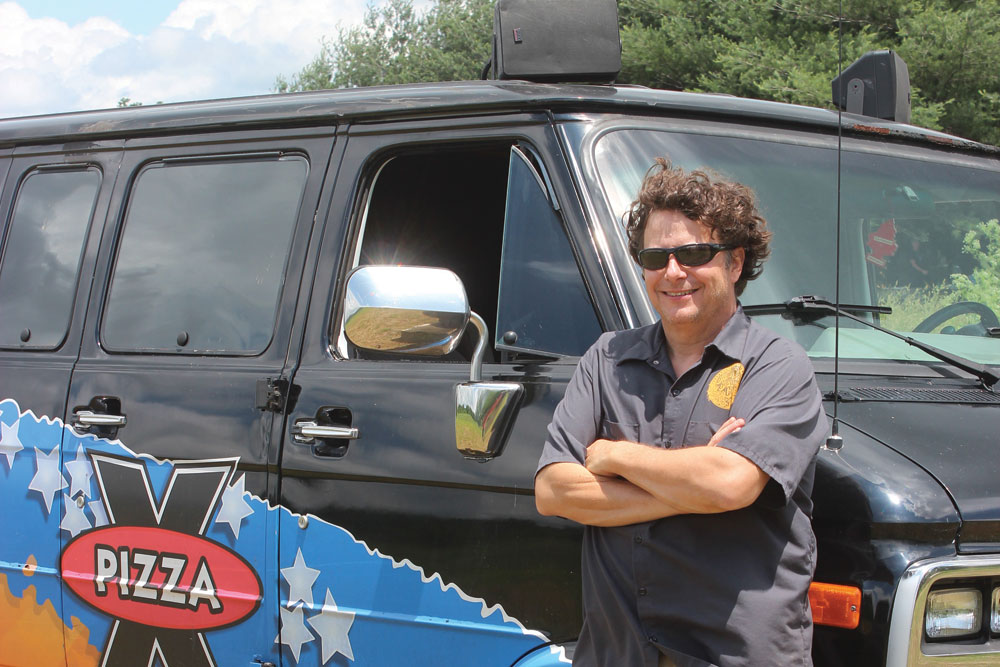 Students at Indiana University (IU) love pizza almost as much as they love beer pong and basketball. And just as the Hoosier name is synonymous with college hoops, the locally owned Pizza X (pizzaxbloomington.com) has been synonymous with great pies in Bloomington for more than 30 years. With four stores around the city and one location situated conveniently on the IU campus, Pizza X co-owner Jeff Mease has focused on a few core business principles—simplicity, speed, consistency and efficiency—to build his own diverse mini-empire, under the corporate name One World Enterprises, that also includes a brewpub, a line of handcrafted beers and a catering business, not to mention a sprawling farm stocked with water buffalo and a whole bunch of high-price pigs.

“We were originally a very university-focused business aimed at the college crowd,” recalls Mease, who was a sophomore at IU when he started in the pizza business at a local Domino’s. “Our first store was right across the street from several large dorms. We opened at 4 p.m. and stopped taking orders on the weekends at 4 a.m.”

But youth is fleeting, and even frat boys grow up one day. “It’s always natural—and probably very healthy—to sell to the kind of customer that you are yourself,” Mease says. “You can understand them. And as our customers got older and settled down with families, we began to open more stores in residential areas. I think it was very natural for us to grow with our customer base.”

A Debt to Domino’s

For a proudly independent pizzaiolo, Mease owes at least some of his success to the world’s second-largest pizza chain—and he’s not embarrassed to admit it. He was still in his teens when he worked part-time as a delivery driver for Domino’s. And he learned as much from company founder Tom Monaghan’s business model as he ever gleaned in his classes at IU. “Domino’s had two stores in Bloomington at the time, and they just ran circles around everyone else,” Mease recalls. “They’d designed a brilliant ordering and paperwork system—it was just a great operation. Several of us at the time felt we could borrow from those systems but create a local company and be in a good competitive position.”

Mease and partner Lennie Busch broke away from Domino’s to create Pizza X, then called Pizza Express, in 1982. They borrowed liberally from the Domino’s system, emphasizing freshness of ingredients and consistency. They also adopted the megachain’s policy on speedy delivery, Mease says. “Across the company we still have a 22-minute delivery average to the customer’s door. Nobody else can touch that.”

Of course, it didn’t hurt to have a location on the IU campus, just up the street from Fraternity Row. “I was still a student myself at the time, so we were able to connect with other students. We did a lot of student-focused marketing that Domino’s and the other chains couldn’t do as a large enterprise.”

As the business began to expand off-campus, Mease and Busch added a commissary to ensure consistency and quality. But even as demand for their pizzas grew, the owners stuck to their stripped-down—and Domino’s-inspired—business model: delivery and carryout only, with a relatively simple menu that emphasized quality over quantity.

“I have tremendous respect for Domino’s Pizza and Tom Monaghan and what they accomplished during their first 25 years,” Mease says. “Monaghan revolutionized the business and demonstrated what was possible. Many of us, from me to John Schnatter and everyone in between in the delivery business, owe our livelihoods to him.”

Connecting With the Customer

Mease may have copied Domino’s operational systems, but his approach to marketing reflects a hipper, fresher style that’s all his own, the mark of a lifelong hippie—he describes himself as a “dirt-worshipping tree hugger”—who has remained young at heart. “An independent cannot and does not need to market like the big chains market,” he insists. “The independent also has many more opportunities to create fans than a large corporation does. We look for opportunities to connect with our customers. For a long, long time, we have had one person in the company dedicated to marketing and PR. We keep a lot of young people involved in our marketing department, and we listen to their ideas. We don’t let the older people in the organization make all of the marketing decisions—and by that I mean people over 50, like me.”

One of Mease’s most successful and enduring marketing campaigns first rolled out—literally—in the late 1980s. The Pizza X van is a multicolored, star-spangled billboard on wheels, decked out with the company’s logo and slogan (“Pizza to the People”) and an illustration of the Xpress Man, a superhero character clutching a handful of breadsticks. “We got the idea from local radio stations which, at that time, used a similar tactic to get out into the community and get seen,” Mease says. “We take the van to a wide variety of community events. By itself, it acts as a billboard for us, but we’ll often staff it with several of our marketing ‘X-terns’—IU students looking for marketing experience—and hand out Pizza X swag, such as cups, pens, T-shirts and other goodies.”

Xpress Man, the Pizza X mascot, began as an illustration for an ad campaign in the 1980s. “Someone had the idea to ask the IU theater department to make a costume and bring the character to life,” Mease says. “We’ve had Xpress Men from nearly every race, color and creed, sometimes with a mohawk, a ponytail or muttonchops. Sometimes Xpress Man isn’t even a man.”

Xpress Man and the Pizza X van have become familiar sights at IU sports events. “At every home soccer game, the van takes a slow lap around the field and ends up with Xpress Man jumping out and delivering a pizza to a random fan in the stands,” Mease says. “On some nights we do Pump-N-Thump, where we take the van to frat parties or to the downtown area when a lot of people are out and about. We’ll stop the van, and the X-terns will distribute swag and make friends.”

The Pizza X logo also makes the rounds in a simpler form—the popular stadium cups that IU students and locals alike use and reuse for everything from dinnertime refreshments to, well, more adult-oriented libations. “We’ve been doing these cups for about 25 years,” Mease says. “If you just compared the Pizza X cup to a bottle of Coca-Cola or a Styrofoam cup in terms of packaging costs, you could never justify it. Or you can say, this cup will cost me 15 cents or more, but I can charge enough for it to make sense, and all of a sudden there’s a stack of these things in our customers’ cupboards. That does make sense. They’ll last forever, and they can get used hundreds of times. So red Solo cups can go to hell.”

Available in a wide—and ever-rotating—range of colors, the Pizza X cup also figures into one of the company’s social media promotions, Fun Photo Friday. “We go out and stash a cup somewhere in Bloomington, take a picture of it and post it on our Facebook page,” Mease says. “The first person who can identify the location of the cup gets a free pizza and breadsticks. The cups are a tremendous marketing tool for us.”

“We don’t let the older people in the organization make all of the marketing decisions—and by that I mean people over 50, like me.” —Jeff Mease, Pizza X

While most pizzerias’ menus grow larger and more complex as the company expands and adds units, Mease has resisted the urge to stray from what Pizza X does best. “All we sell is pizza, breadsticks and soft drinks,” he points out. “We’ve stayed away from wings and sandwiches—they really complicate your operation, and they can make your core product seem less important to the staff, resulting in lower quality.”

He has also built up immunity to the discounting disease to which so many restaurateurs succumb during economic downturns. “You can’t stay in business for 30 years selling $4.99 pizzas and doing gimmicks,” Mease says. “I don’t like gimmicks. We look for other ways to create value that will work over the long term. Why do others do it? It gives them a hook so they can sell other more expensive things—like wings and sandwiches—but we don’t have those more expensive things to sell.”

Instead, Pizza X has offered the same three value meal deals for years. The Big X Bargain, featuring a large one-topping pie, an order of breadsticks and two soft drinks for $13.95, makes up a large chunk of daily sales, while breadstick devotees go for the Little 500 Deal, consisting of one order of breadsticks, two dipping sauces and a 22-ounce soda for five bucks. Finally, large parties cash in on the Volume Deal, which offers large one-topping pies for $8.99 each with an order of between two and 10 (additional discounts apply for even larger orders).

Meanwhile, local school groups take advantage of the ongoing Proof of Purchase (POP) promotion. Every Pizza X box comes with a proof of purchase tab, each of which can be redeemed for 25 cents. Once a group has collected a large number of POP tabs, they turn them in to Pizza X and receive a hefty check. About 20 organizations are registered for the program, ranging from elementary and middle school PTO groups to Edgewood High’s Speech Team and Bloomington High South’s Amateur Radio Club.

Over the years, Mease and Busch have become more than just pizzeria operators. Even as they continued to open Pizza X locations around Bloomington, they also created Lennie’s Restaurant and Brewpub, which serves gourmet pizzas, salads and sandwiches, and Bloomington Brewing Company, which makes handcrafted ales, porters and ambers for Lennie’s and other area restaurants, all under the One World Enterprises umbrella. The company’s purchase of the historic Loesch Farm, located west of Bloomington, is part of a plan to create a “farmstead restaurant,” complete with organically grown crops as ingredients. The farm also grows hops for the brewery as well as heritage breed pigs and water buffalo.

It’s all part of Mease’s commitment to Bloomington, a town he truly loves. He prides himself on keeping Pizza X as “local” as it can be. “We aren’t carpetbaggers,” he says. “We live here, and it affects the way you operate a business when you live next door to your customers and your employees. So we look for ways to make sure our dollars stay here, too. We support the local food bank and the local soup kitchen. We support the Lotus Education and Arts Foundation, which produces the Lotus World Music and Arts Festival. We like to support those events and organizations that make Bloomington special and unique.”

Although One World Enterprises will continue to explore new business opportunities and causes, don’t expect any big changes at its Pizza X stores; Mease believes his customers prefer consistency over the long term. “A business comes to hold a space in the customer’s mind, and if the business is well-managed, it can own that space,” he says. “Through a lot of hard work, we’ve been fortunate to pretty much own the pizza delivery market in Bloomington. It’s ours to lose. One sure way to lose it would be to get too creative within our four walls. I’m big on keeping things as consistent as possible over time. Customers like to have the same experience every time they come in. You might be able to change and keep those customers, but you might just shoot yourself in the foot.”