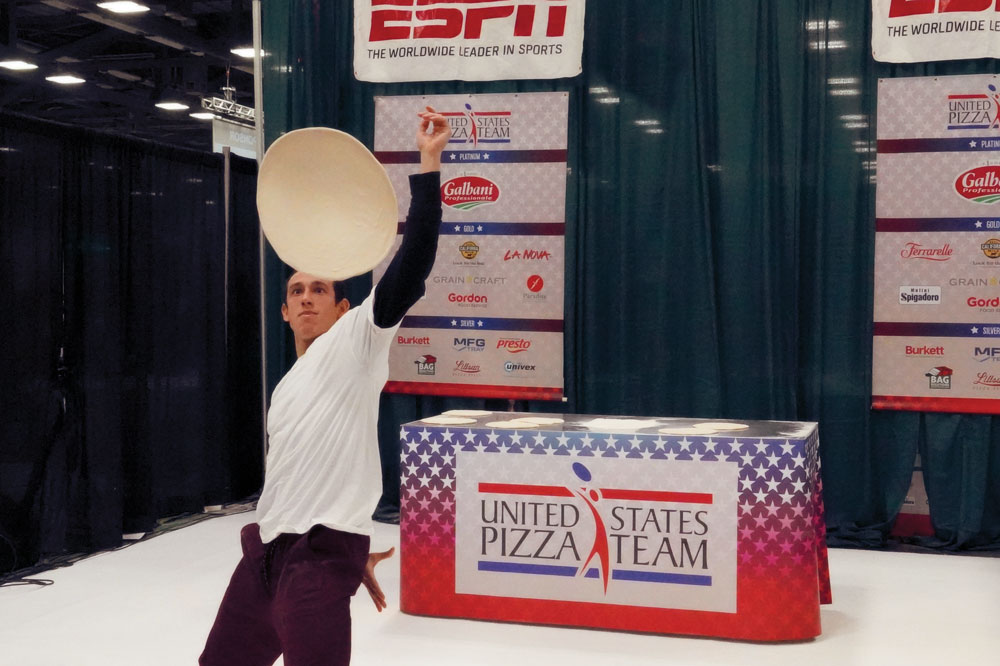 David Whisker might not throw a 90-m.p.h. fastball, but sports fans around the country know him as a box-folding speed demon—thanks to the U.S. Pizza Team’s (USPT) history-making debut on ESPN3 in January. They also watched world-champion contender Scott Volpe spin a pair of doughs in a tricky reverse double roll and saw newcomer Tara Hattan turn cartwheels and somersaults in her national TV debut.

And when the live broadcast of this year’s USPT Winter Acrobatic Trials, held January 14 at the Mid-America Restaurant Expo (MAREXPO) in Columbus, Ohio, was over, pizza sports had arrived in the United States, bearing the coveted stamp of approval from the world’s No. 1 sports network.

The event marked the first time a pizza industry athletics competition has been aired live on an ESPN network—or any TV network, for that matter. But it won’t be the last: PMQ and the USPT have an exclusive deal with Go Live Sports Cast, a leading provider of live-streamed sports that works with ESPN to cover a wide variety of relatively new and long-established sports, and upcoming USPT competitions will be aired on the network throughout 2019.

“I think the exposure of being on ESPN is one of the best things to happen to pizza acrobatics,” says USPT member Jamie Culliton, a two-time world champion in dough spinning acrobatics who served as the broadcast’s color commentator, along with announcer Daniel Lee Perea, PMQ’s senior media producer. “If it catches on, the sky’s the limit for many of these up-and-coming competitors.”

PMQ publisher Steve Green called the broadcast “a historic first for the pizza industry.” He added, “This is a huge step forward for pizza sports and for all of those independent pizzeria operators looking for a way to set themselves apart from their competitors, especially the big chains. ESPN’s coverage will open the door to new branding and exposure opportunities for pizzeria owners looking for a unique marketing slant. You or one of your pizza makers could be the next Tom Brady of pizza sports.”

More importantly, Green notes, pizza sports can help operators better connect with consumers and sell more pizza. “Until now, pizza sports has been something of an industry secret, little-known to the general public,” Green says. “We think the time is perfect to elevate pizza sports, with the help of our industry, and bring a piece of the pizza culture to consumers. As we work to raise awareness of pizza acrobatics and other pizza sports through ESPN coverage, those who invest in the sport will reap the rewards through media coverage, social media exposure and a higher profile in the community. If your employees are recognized nationally and even internationally for their athletic and showmanship skills as well as for their great pizzas, customers will take notice. We see pizza sports as a great way to bring invaluable exposure to those 34,000 independent pizza brands that don’t have the advantages of a top-10 pizza chain.”

Green helped pioneer pizza sports in the United States when he created the USPT in 2000. He took a highly skilled “dream team”—consisting of Dino Ciccone, Danny Wolfe and industry legend Tony Gemignani—to the World Pizza Championship (WPC) in Italy that year, where Gemignani stunned everyone by performing his acrobatic routine blindfolded and tied for first place (he claimed the full title for himself the next year). As the team’s profile grew, the Food Network aired a special on its WPC performance in 2004, and Gemignani wowed The Tonight Show host Jay Leno with his routine, among other TV appearances.

Gemignani went on to form his own acrobatic team, the World Pizza Champions, but the USPT kept producing winners, even earning the Team Acrobatics gold medal at the International Pizza Championship in Naples, Italy, in 2007 and at the WPC in 2011. Culliton was a member of that 2011 championship team and went on to score two consecutive second-place finishes in the WPC’s Individual Acrobatics category in 2014 and 2015 before winning his individual WPC championship in 2016.

For Culliton, years of training and practicing with Throw Dough paid off with that solo world title. “Dough spinning caught my attention the minute I started my first pizza job in 1995,” he reflects. “I thought it was the coolest thing. As I became more comfortable with dough, I started practicing different tricks to entertain guests and friends. I was pretty good, too.”

Gemignani recognized Culliton’s talent and advised him to take a shot at the WPC when they met at a pizza industry event. “That was it for me,” Culliton says. “I practiced all year and competed that next year. As I recall, I came in last place, but watching all the great acrobats from around the world sparked a new passion for the industry in me.”

Culliton soon realized that winning championships requires more than a sure-handed spin technique. The best routines combine dexterity, artistry, showmanship and athleticism, and a gift for the ol’ shimmy-shake doesn’t hurt, either. As he honed his act, Culliton became known for his polished stage presence and sharp attire—including, on occasion, a hot-pink button-down shirt and a dapper fedora—bringing a dose of panache to a sport largely dominated by dudes in flour-dusted tees and sweatpants. In one of his silver-medal wins in Italy, he even brought fellow pizza pro Samantha Jones onto the floor for a quick Astaire-and-Rogers-style dance number.

“Physically, every person is different, so everybody’s style should be unique to them,” Culliton says. But practice does make perfect. “I recommend getting used to three or four minutes’ straight spinning time every time you practice—just like in a routine—to build up your stamina. Always stay relaxed and stretch and keep your body loose so you move with the dough. It should become an extension of you. Keep your legs relaxed so they slide and move, like you’re dancing; if you’re too stiff, it looks awkward and forced. I also recommend lots of ground work to build your core strength.”

“I’ve Never Been on TV Before”

With Culliton sitting in the announcer’s booth, his sartorial flair was conspicuously missing from January’s acrobatics competition at the MAREXPO. But talented veteran competitors like Volpe, the owner of Fiamme Pizza Napoletana in Tucson, Arizona, and Hattan, an employee of Andolini’s Pizza in Tulsa, Oklahoma, brought their own bold styles to the floor. Volpe, who took the silver medal in last year’s WPC contest, qualified to return to Parma, Italy, for a shot at gold this year after winning the trials event in Columbus. In addition to competing in acrobatics, Hattan finished second in the Fastest Box-Folding category behind Whisker, of B.C. Pizza in Boyne City, Michigan. As always, the competition also included the Largest Dough Stretch and the Fastest Pizza Maker categories.

Still, this event felt different, charged not only with competitive energy but with historical significance: For the first time, the contenders were performing for a national audience of sports buffs watching curiously on their smart TVs, iPhones and tablets. “ESPN is the gold standard,” Green says. “When you see that ESPN banner behind the prep tables and realize what that signifies, it raises the stakes considerably. ESPN3 carries NBA and Major League Baseball games, Grand Slam tennis events, golf championships—and now pizza sports.”

As co-founder of Go Live Sports Cast, Kelly Rinne has overseen coverage for athletic events ranging from Major Arena Soccer League to mixed martial arts and even pickleball. She was thrilled with the outcome of her company’s first-ever pizza-sports broadcast. “It went really, really well,” she says. “The network was really excited about it. It’s a sport that nobody’s seen, and you just got to do this nationally on the biggest sports network out there.”

Building Excitement Around Your Brand

It’s also a sport that can get local consumers excited about—and rooting for—your brand. Decorating your wall with USPT and WPC plaques verifies your credentials as a pizza industry leader as well as a hometown pizza shop. And USPT competitors frequently earn local press coverage for taking part in pizza sports events, especially when they claim a medal in any category.

Nick Bogacz, owner of the Pittsburgh-based, four-location Caliente Pizza & Draft House, sent a large contingent of his employees to the USPT competition in January. “Our customers eat it up,” says Bogacz, who recently published a book, The Pizza Equation: Slicing Up How to Run a Successful Pizza Enterprise. “I think they see a difference in us after these competitions. You go to these events, and you come back with enthusiasm, and you’ve learned something on the way.”

Brittany Saxton, owner of Six Hundred Downtown in Bellefontaine, Ohio, has been competing in pizza sports since 2007 and sends her managers to take part in events. She says pizza sports help solidify relationships between employees and with other pizza professionals nationwide. “Building that camaraderie and that network with other people who compete and work in the industry—you create friendships with the people you compete with, no matter where they’re from,” Saxton says. “You’re surrounding yourself with people who are on the same path. You learn new ideas, you can bounce ideas off each other. It helps with problem-solving in your restaurant because you’re meeting other people who are going through the same struggles you go through. [Pizza sports] give you a network of people who can help you fast-forward your career in the right direction.”

And with recognition from ESPN, pizza sports will only get bigger—and cooler—to a growing fan base. Bogacz says watching the USPT event live on TV was an exhilarating treat for customers, friends and relatives of his employees who competed. “Their aunts and uncles were sharing on Facebook that these guys were on ESPN,” he says. “People were shooting video of it from their TVs and posting it on Facebook. There was so much excitement.”