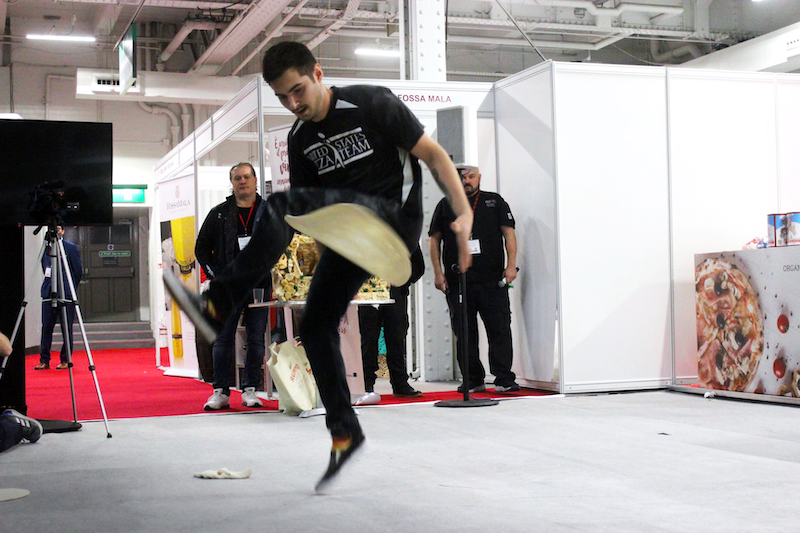 The best pizza spinners from across the world convened at the International Acrobatic Pizza Spinning Championship in downtown London to vie for the coveted title of World’s Best Acrobatic Spinner. Hosted by PizzaTV and the European Pizza and Pasta Show, the winners were announced on August 18, 2020, through a live video premiere on PizzaTV’s website and Facebook page.

“I was amazed by the talent this event drew. Some of the greatest names in spinning came out to compete and to judge,” said PizzaTV host Brian Hernandez. “In the new era of virtual events, I see this type of competition growing in the future.”

The competition was fierce, and the final judging came down to the wire. Rising to the top of the ranks by only 1.5 points was Michael Reyes-Casanova of Hearth Wood Fired Cuisine in Virginia Beach, Virginia. Casanova’s perfect mix of difficulty, crowd interaction and swagger won over the judges, earning him first place on the international stage.

“I worked hard to get to this event, but to be here with these competitors is an honor. Some I haven’t met, but others I am great friends with,” said Reyes-Casanova. “Either way, we all came together here in the spirit of pizza spinning. This sport relies on great pizza athletes, and they showed up today.”

Second place went to Jérôme Falco of Falco’s Pizza in Mimizan, France. A veteran champion spinner, Falco showed a steady hand, great improvisation, and the calmness of a long-tested professional. Third place was taken by Tara Hattan of Andolini’s Pizzeria in Tulsa, Oklahoma. With great theatrics and energy, Hattan distinguished herself with an attitude all her own on the field.

Rounding out the roster were Dario Viola of the London International Pizza School in London and Quentin Suaret of Le Pizzeria Golden in Le Puy-en-Velay, France.