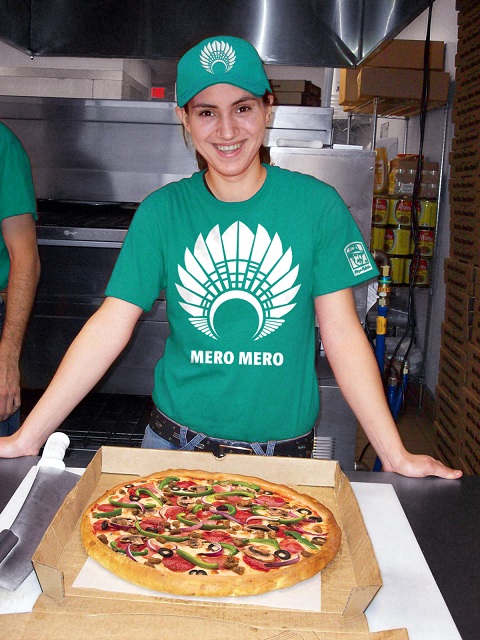 This month Pizza Patrón, the premiere Mexican pizza brand, rolled out its first corporately-sponsored, system-wide employee incentive program to both recognize and reward its employees that strive to be EL MERO MERO or ‘the best of the best.’

Each month, one store winner will be chosen based on which team has the highest “pie average” increase over the previous month.  The pie average is determined simply by dividing total sales by the number of pies sold.  This objective levels the playing field among stores and focuses on the success of increasing sales through customer interaction.  The winning team will be awarded a special uniform, cap and t-shirt, recognizing their MERO MERO status, as well as gift cards ranging in value from $100 to $200.

Pizza Patron’s mission since 1986 has been ‘Service to community. Commitment to value.’ and the company knows the only way to consistently achieve this goal is through its most valuable asset, its employees, says Andrew Gamm, Pizza Patrón brand director.

As part of the program, Pizza Patrón Inc. will be hosting monthly conference calls with store managers to get feedback on how each team is progressing.  The calls are also designed to improve the connection between the corporate team and employees on the front line by offering advice and encouraging them in their efforts.

“At Pizza Patrón, we know that we will never exceed the expectations of our customers unless we surpass what our team members expect from us,” said Gamm.  “Pizza Patrón simply cannot succeed without its team members and this incentive program is one small way we hope to inspire more passion and enthusiasm for the brand.”

The EL MERO MERO program is scheduled to run through all of 2014 with winning teams being announced during the company’s monthly manager calls.