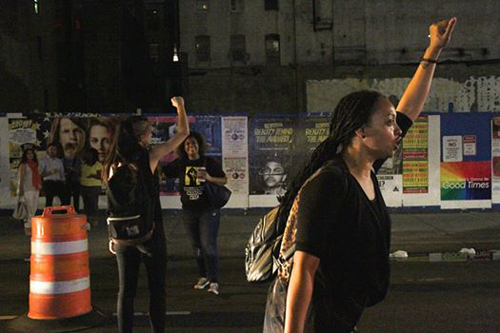 In the midst of the Black Lives Matter movement nationwide, a New York pizzeria has some explaining to do.

Dnainfo.com reports that the Midtown pizza restaurant Pizza by Certé added a pie selection to its menu last week called "Pic-a-Nika," The item was topped with fried chicken, watermelon and sunflower seeds. An immediate firestorm from the social media community and civil rights groups, including a group called Millions March NYC, convinced the pizzeria to pull the item off its menu August 14. That morning the Millions March group, created after the death of Eric Garner while in New York City Police custody, handed out flyers outside the restaurant carrying a description of the dish's ingredients and the words "#boycottracism" and "#blacklivesmatter." The pizzeria at 132E 56th Street, at Lexington, says the item was meant to reflect a picnic lunch pronounced in an Italian accent. Initially, restaurant manager Vincent Guzman said Pizza Certe had changed the name of the item to Picnic Pizza, but has now pulled it from its menu.

Read more on the explosive impact of a pizza menu item gone wrong.