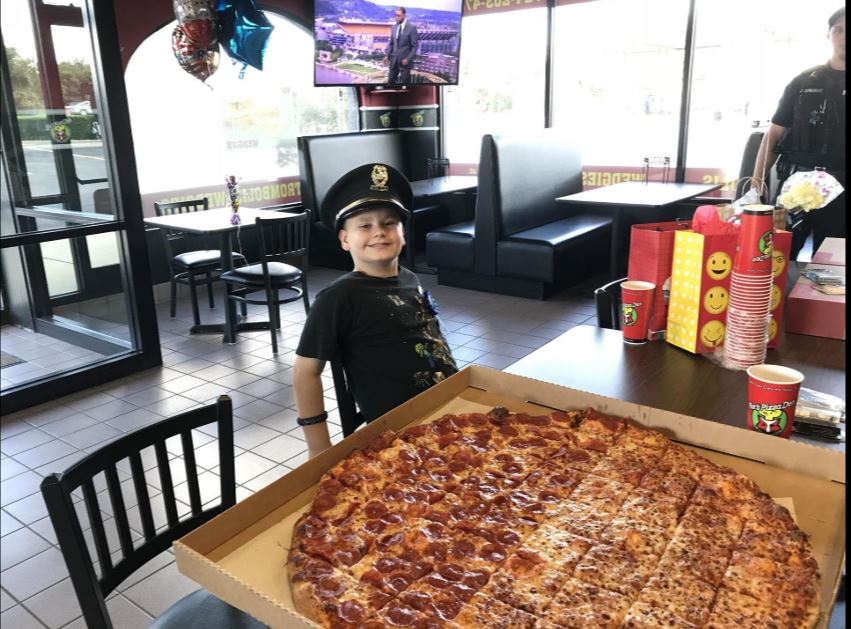 Cops, sheriff's deputies, even a local bomb squad—it’s hard to imagine a cooler guest list for a young boy’s birthday party. And best of all, there was pizza.

As Rachel Wagoner of the Beaver County Times reported, Jeffrey McCarty, who lives in Aliquippa, Pennsylvania, celebrated his ninth birthday with his second annual pizza party honoring the county’s law enforcement officers. The event took place at Fox’s Pizza Den in Hopewell Township, with more than a dozen officers in attendance.

Jeffrey was moved to honor local police officers after a 2016 mass shooting in Dallas that left five officers dead and nine injured. Saddened by the news and determined to show his appreciation for law enforcement, Jeffrey and his mother started making cupcakes for local departments. Later, inspired by the story of St. Michael, the patron saint of law enforcement, Jeffrey and his mom switched to giving St. Michael medallions and prayer cards to every officer they met. “It’s to make sure they stay safe every day,” Jeffrey told the Times.

The prayer cards are inscribed with a verse from John 15:13: “Greater love has no one than this: to lay down one’s life for one’s friends.”

Jeffrey now regularly visits police and fire departments to honor the men and women he considers “superheroes,” according to his blog, Jeffrey’s Joy For All Heroes. He threw his first pizza party for law enforcement in 2017.