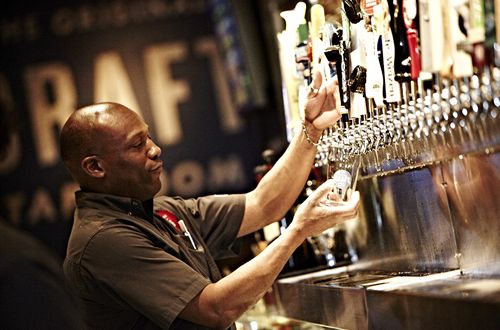 BOULDER, Co. (May. 11, 2015) – Old Chicago Pizza & Taproom, a traditional casual dining restaurant known for its expansive selection of craft beers, is continuing its Explorer Series with the fourth installment kicking off on May 20. For this series, Old Chicago has collaborated with Minnesota-based Summit Brewing Company to create the featured selection.

“Partnering with Summit Brewing Company for this series has been a real treat for us,” said Jason Murphy, Old Chicago’s brand manager. “Being with the team in Minnesota during the brewing process and watching the brewmasters work their magic was an incredible experience. Having a hand in the behind the scenes work is crucial to us because we like to make sure that we’re serving our guests the absolute best. We’re thrilled with the way the collaboration turned out, and are eager for everyone to be able to try this unique and flavorful selection.”

In addition to the Cracking Wit, the series also will feature other selections from Summit Brewing Company, and will be available until the kegs run out. Selections include:

As an added perk, guests who try the Summit selections will be able to take home their very own Summit and Old Chicago collaboration pint glass for just two dollars.

A leader in the traditional casual dining space, Old Chicago has been serving handcrafted cuisine and local craft beers across the nation for 37 years. Old Chicago is committed to quality creations and to showcasing local, regional and national craft brewers while providing great value in a welcoming atmosphere. To learn more about Old Chicago, visit www.oldchicago.com.

Old Chicago Pizza & Taproom (Old Chicago) is a traditional, casual dining restaurant specializing in Chicago-style pizzas, taproom classics and craft beer. Founded in 1976, Old Chicago operates in 22 states with 96 restaurants. With over 30 craft beers on tap, Old Chicago is also the home of the World Beer Tour which rewards members for enjoying 110 of the best craft beers from across the globe. Visit www.oldchicago.com to learn more and to find the restaurant nearest you. For information about franchise opportunities, visit www.ocfranchising.com.

Situated on the bluffs of the Mississippi, Summit Brewing Company has been brewing craft beer in St. Paul since 1986.   One of the original sodbusting craft breweries in the Midwest, Summit is now available in 17 states including Minnesota, Florida, Illinois, Indiana, Iowa, Kansas, Kentucky, Michigan, Missouri, Nebraska, New Jersey, North Dakota, Ohio, Pennsylvania, South Dakota, Arkansas and Wisconsin.  Summit produces 15 varieties of premium craft beer, including eight year-round beers, five seasonal beers, and the limited release Unchained Series and Union Series.  Since its inception, the brewery has been a consistent pioneer in the craft beer movement. For more information about Summit, please visit www.summitbrewing.com.

CraftWorks Restaurants & Breweries, Inc. is the largest craft brewery restaurant operator in the country with nearly 200 franchised and company-owned restaurants primarily operating under the Old Chicago Pizza & Taproom, Gordon Biersch Brewery Restaurants and Rock Bottom Restaurants & Breweries brands.  As a leader in the casual dining segment, CraftWorks also operates strong regional brands, including ChopHouse and Big River, and employs more than 12,000 people throughout the U.S.  All of CraftWorks’ restaurant brands have innovative menus with made-from-scratch food and a vast selection of unique craft beer, as well as unbeatable service and loyalty programs that tout over a half-million active members.  Based in Broomfield, Colo., CraftWorks is not only committed to serving its loyal guests, but also the communities in which its restaurants operate.  In 2000, the CraftWorks Foundation was formed and has contributed millions of dollars positively impacting communities throughout the country. For additional information about CraftWorks, the foundation and its craft brewery restaurant brands, please visit www.craftworksrestaurants.com.