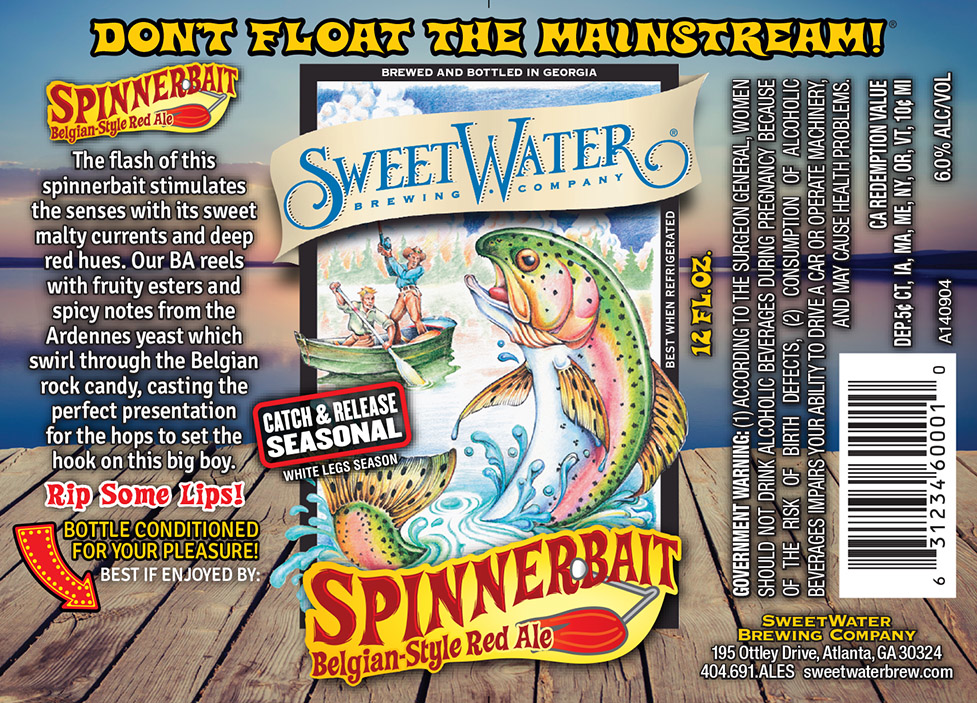 SweetWater Brewing Co. wants folks to dodge catching a cold this winter and instead cast lines to catch an all-new coldie – Spinnerbait. The new seasonal sipper makes its debut in the winter slot of the brewery’s Catch & Release lineup from December to February.

Brewers lured in a few first-ever SweetWater ingredients for the creation of this true Belgian red ale. Mixing it up with fresh Aromatic malt (new to SweetWater’s stash), Spinnerbait also swirls in a blend of 2-row, Pilsner, wheat and black wheat malts; Columbus, Willamette and US Golding hops; Ardennes yeast; and tops it all off with Belgian rock candy in the whirlpool. This catch weighs in at 6-percent alcohol by volume and 25 IBUs.

Spinnerbait’s sweet malty currents and deep red hues set out to tingle the taste buds. Belgian Ardennes yeast brings out fruity esters and spicy notes giving this brew a complex character and making it a classic selection for the season. Belgian rock candy sugar sets the stage for the earthy hops to bring in a balanced, spicy yet sweet finish.

Beginning the week of Dec. 1, Spinnerbait will make its seasonal run on draft taps and shelves, in 6-packs and SweetWater’s winter Tackle Box variety packs throughout SweetWater’s entire footprint. Fans should reel ‘em in while the fishing is good, ‘cause this seasonal brew is only ripping lips through winter coat season.

For more information on SweetWater Brewery or its full lineup, please visit www.sweetwaterbrew.com.

Living by the motto “Don’t float the mainstream,” SweetWater Brewery has been blazing its own path in craft beer throughout the Southeast since its inception in 1997. With a brewer calling the shots, quality of beer—and life—are always most important in crafting a lineup of lip-smackin’ brews. Widely known for its flagship 420 Extra Pale Ale, SweetWater also serves up an ever-evolving Catch & Release seasonal lineup of brews and an off-beat, one-off Dank Tank series. SweetWater invites folks to join them for tours and tastings of their Atlanta brewery every Wednesday through Sunday. Visit www.sweetwaterbrew.com for more info about SweetWater, or hang out with your social thang out by following SweetWater on Twitter/Instagram @sweetwaterbrew, or on Facebook at facebook.com/sweetwaterbrew. And always remember; drink ‘em if you got ‘em!