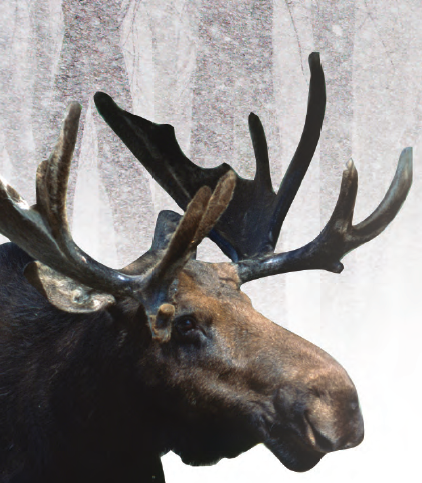 Most pizzeria operators have to work through certain obstacles—a less than ideal location, uninspired employees or excessive competition. But Dan Fiacco, manager of Moose’s Tooth Pub and Pizzeria in Anchorage, Alaska, has a unique business hindrance: the state’s notorious dark winters. From November until March, the sun doesn’t come up until about 10 a.m. and promptly sets before 4 p.m. With no other choice, Fiacco says, Moose’s Tooth responds in the only way it can: “We sell pizzas in the dark.”

So if the extended darkness is no problem (“People here are used to it,” Fiacco claims), what is the biggest challenge at Moose’s Tooth week after week? “Keeping up with our customers,” Fiacco says. “It’s extremely fastpaced and very busy. It’s go, go, go—very demanding on the employees, day in and day out. We’re pretty much busy every single day.”

Indeed, despite those long nights during the winter season, the cash register rings on at Moose’s Tooth. One tends to envision Alaska as a land of frozen tundra and dog races (the famous 1,150-mile Iditarod race starts here), but snow plows keep Anchorage roads clear, and even in winter the temperatures rise into the low 20s during the day—frigid, for sure, but not insurmountable. And, with 100 miles of cross-country ski trails, the city leads the nation in that sport, and such activity apparently works up quite an appetite. Fiacco declines to give sales figures or provide a weekly count but flatly claims, “We’re the No. 1 independent in the country.”

Moose’s Tooth seats 250 and employs 150 people, with 50 employees working each shift. The extensive menu offers variety, but the focus is definitely pizza. “We’re all about pizza,” Fiacco declares.

That dedication has led to boundless creativity in the kitchen: Though Anchorage is something of a far-flung locale, its nearly 300,000 residents enjoy the pizzeria’s variety of gourmet pies with toppings such as shrimp, halibut and smoked salmon. “Those are our local fish,” Fiacco points out. “The shrimp are seasonal; we get those fresh in the summer. The fish toppings are very big sellers for us.” Fiacco also notes that Moose’s Tooth has dealt with the same suppliers since the store opened in 1996. “That really helps; it not only gives you some comfort but, for the customers, it allows for continuity. They know that they can come in and get a spinach garlic pizza, and when they come back a month later it will be as delicious as it was the last time. That continuity is crucial in the food business.” 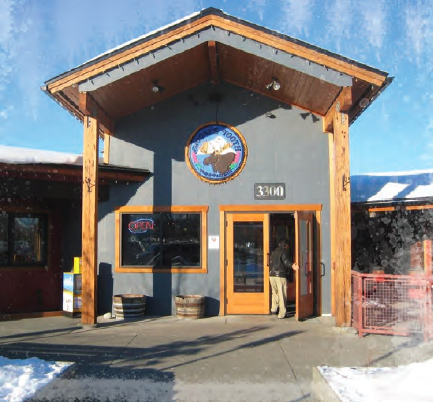 Moose’s Tooth offers 38 different kinds of pizza on its regular menu, and the store runs three specials per week, which amounts to 41 different styles of pizza. The Spicy Thai Chicken pizza (with peanut sauce, chicken, red onions, bean sprouts, carrot threads, cilantro, mozzarella, garlic and oil) sells for $23.50. Also popular is the Avalanche (pepperoni, blackened chicken, bacon, red onions, parsley, cheddar, mozzarella, provolone and barbecue sauce), which is $23.95 for a large. A build-your-own option (on average, $24 for a large) with Denali Sauce (a puree of spinach, ricotta, herbs and spice) is another customer favorite. Fiacco says he monitors sales to see what’s working and what’s not, keeping the menu on target at all times. “We look at the menu twice every year, and if there are pizzas that aren’t moving, we swap them out. But we pretty much stick to what we have.”

Moose’s Tooth doesn’t offer delivery but employs 10 to 12 servers per shift. Fiacco says he understands that many operators cite employee retention as one of their most vexing problems. Not at the Tooth, he says. “We have great ownership that takes good care of the employees, so turnover is very low.”

The success of Moose’s Tooth has spawned two sister businesses located only a five-minute drive away. The Bear Tooth Grill and the Bear Tooth Theatre Pub offer patrons beer freshly brewed onsite, a wider menu and first-run movies, often as many as six or seven films per week. Admission is a bargain at $3, but patrons are encouraged to bring a meal and drinks into the theater, which is set up with tables. Recently, dramatic plays have also been performed in the space, and the theater is also available for rental. “The Grill and the Theatre Pub are completely different entities, though owned by the same people,” Fiacco says.

The original location, Moose’s Tooth, pioneered the idea of live music years ago by staging large concerts in its parking lot. “The first one was 11 years ago,” says Fiacco. “We started out doing every show here. Then, as it grew, we moved some over to the Bear Tooth, so now we do most of the music over there. When we do our outdoor concerts, we get anywhere from 2,000 to 3,000 people. We set up a tent and sell pizza.” The concert series has grown to host four major shows every summer. Last year, the band Cake drew 3,000 attendees to the venue; other visiting artists have included the Wailers, Indigo Girls, Leftover Salmon, and G. Love and Special Sauce. Future plans even call for a reggae festival. 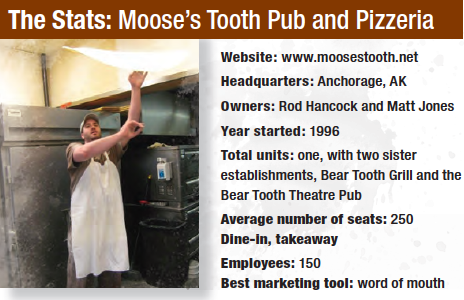 “Pizza is what we do, but we also wanted to open up the community here to some different things,” Fiacco notes, “while at the same time driving people to the restaurant.” And the community has certainly noticed, judging by music promoter Mike McCormick’s comments in the Anchorage Daily News that claimed the Moose’s Tooth has upped the ante for live music in the area. “They’ve basically created their own scene,” McCormick told the newspaper. “And if the music doesn’t do it for you, what’s there to lose? You can have a good beer, hang out and have a good time. The music isn’t the total package.” McCormick goes on to note that booking musical acts in Anchorage has been a dicey proposition in the past: “Anchorage music culture has never been so vibrant, and the Tooth is a big part of it. They offer a venue, and there’s a shortage of good venues in this town. They are willing to take risks and have discovered that it works.”

Even with three facilities in full swing, Fiacco says the company doesn’t have franchising plans at this time. “We’re sticking to what we’re doing now,” he says. “We’ll put out some pizza and do our four shows in the summer.”

But, Fiacco remarks, the operation has grown a lot since those carefree days in 1996 when the business was only beginning. “It was just a couple of friends who came up with the concept,” he recalls. “That got the ball rolling, and it’s grown from there. It’s not necessarily that we had the passion per se, but we served quality food and hired quality people.”

The once-humble pizza pub has now reshaped the entertainment and pizza scene in Anchorage, but Fiacco says the accolades won’t go to his head. For him, even up in the snowy environs that’s almost a world of its own, it’s still all about the pie. “We’re different. We’re strictly a restaurant, and pizza is very much our signature item. Our No. 1 focus here is pizza. Over at the Bear Tooth, they offer pizza with the same dough and ingredients, but just don’t offer as many as we do.”

Even while cementing its name in the pizza world, Moose’s Tooth was able to expand the definition of its brand to include rock and roll, bringing new life to music-loving Alaskans. Still, Fiacco keeps his eye on the ball. “Our bread and butter is pizza, not music.”