Made in Italy - PMQ Pizza Magazine 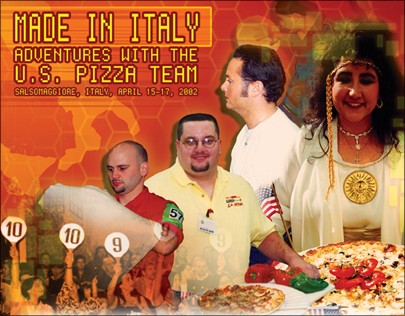 After a torturous nine-hour flight, my excitement and anticipation was getting the best of me as I strained for a view from my window seat. All of the sudden we broke through the clouds and I got my first glimpse of the land where pizza was born Italy. The U.S. Pizza Team had arrived for the World Pizza Championship in Salsomaggiore, which would begin in two days.

As we gathered and talked about what the competition would be like, Steve Green, our publisher, and team interpreter Andy Costa, who owns several Gina's Pizzerias in California, went to arrange for our rental cars. They returned and we proceed to the garage and divvied up the luggage between four cars. We had left the U.S. at about five o'clock on a Friday evening and with the time change and nine-hour flight, it was now about ten o'clock Saturday morning. Since Salsomaggiore was still a three-hour drive away, Andy had suggested we stay in a little town named Lodi, which was the halfway point.

Andy, who had lived in Italy for several years and visits quite frequently, recommended the town because he said it best represents the average small town. "Once you have seen Lodi, you have basically experienced what about 80 percent of Italian towns are like," he said.

So with a quick glimpse of the map, instructions on how to get there if we got lost and a warning about Italian drivers, we set off for Lodi. Ten minutes out of the airport we were all separated and on our own. "No problem," I thought. "We stay on A1 through Milan and watch for the signs about 20 miles south of the city."

There are a few things one needs to know about driving in Italy. First, none of the signs are in English. They don't measure distance in miles; they use kilometers. Italians have two speeds very fast and stop. Don't make a mistake and pull in the express pass lane at the tollbooth. And most important, don't make a mistake and drive into the heart of Milan unless you have several hours to spare.

Fortunately, my passengers, Theresa Snyder-Boring, Eric Boring and Marlyn Snyder, not only have a good sense of humor, they also have nerves of steel. No one panicked as I ran numerous unseen traffic signals and raced like Mario Andretti through the streets. We asked several people how we could find the interstate. They had no idea what we were saying. After stumbling upon a girl from California, we got directions, in English. Four hours after we entered the city we found our way out.

We weren't exactly taking the express route to Lodi, but the ride through the Italian countryside more than made up for it. The fields were perfectly manicured, the trees were uniform in shape and size and the surrounding landscape looked like a scene from an old Walt Disney movie. Very inspiring. Somewhere around five o'clock that evening, we reached Lodi. I feared we would be the laughingstock of the group, but I soon found out everyone had gotten lost. There's an old saying that roads are for journeys, not destinations. I learned the true meaning that day. 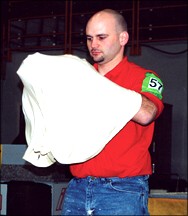 After a much-needed nap, I ventured out later that night with Michael Sheppard and his wife Diane for a slice of Italy. It was getting late and most businesses were closed. We strolled through the narrow, winding cobblestone streets talking. We were aiming for a pizza shop some of the others had dined at earlier, but found it was closed so we continued on our stroll. As we came to the center of the town it opened up into a large plaza in front of a magnificent church. We stood in the center of the square plaza and looked around in awe. We exited and found a little pizzeria on a side street that was open. Dinner was served.

The next day we were to travel to Salsomaggiore, but before we left Lodi someone said to go back to the plaza. Sunday is traditionally the day when local artisans display their goods in the plaza and locals pour into the streets for a day with the family. When we got to the plaza what we saw was amazing. The night before it was deserted. Now the entire plaza was filled with tents, paintings, crafts, bicycles and people ambling around. It was as if time overlooked this little town and it was how I imagined life here was 50 years ago. We could have spent the entire day here, but Salsomaggiore waited.

We piled back into the cars and off we went again. There were more 'alterations' to the scheduled route. In my time in Italy I came to expect and enjoy those wrong turns, or 'alterations.' Those off-the-beaten-paths had the most beautiful scenery. We passed old dairies and you could see the remnants of old cheese factories, farms, terraced hillsides and green meadows. We made it to Salsomaggiore and found the hotel. As the rest of the group arrived, we checked in and went out for lunch. After a relaxing Sunday evening everyone was ready for the competition. 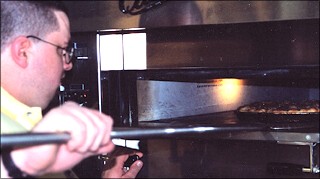 Monday was the first day of competition and the U.S. Pizza Team was ready. What an event. Competitors were friendly, to put it mildly, and ranged in ages from three to as old as rocks. Small children were tossing dough with their teams, pizza makers were preparing their ingredients and a festive mood enveloped us.Sean Brauser was the first of our group to take control of the ovens, but not the first to cook at the event. His pizza, the Butcher's Shop, came out beautifully. Theresa wrapped up the day preparing a delicious Greek Supreme that wowed us all. We left the show around six and went back to the hotel. One of the best treats was that after the judges had finished sampling the pies, they were carried to the side for people to try. We ate some of the best pizzas in the world.

The Team Acrobatic Dough Throwing segment took place Monday night at one of the local clubs in Salsomaggiore. U.S. Pizza Team coach Tony Germinani and I were invited to be part of the judging team. This high-energy event featured about twelve teams that astonished the crowd with choreographed routines that exhibited their dough handling talents. One could immediately see that this event required contestants to be familiar with their fellow teammates style of throwing. The event not only featured dough-handling skills, but also involved routines that seemed to tell a story. Some teams used elaborate backdrops and props and stuck to certain themes that reflected the team's individuality. Team Sicily won the event.

Day two of the World Pizza Championship continued to serve up another slice of Italian hospitality and food. As an added treat, Sandy Plotkin, founder and CEO of CarryHot USA and U.S. Pizza Team sponsor, was invited to be part of the pizza judging team. The US team completed competition in the gourmet and traditional categories on Monday and had day two to watch other competitors from around the world prepare and preset their creations.

Day three, the final day of events at the World Pizza Competition began with the Dough Stretching category, in which U.S. Pizza Team member Michael Shepherd competed. The highlight of the day was the Individual Dough Acrobatic category. Here, pizza makers from around the world were able to show their dough handling talents as they amazed spectators with dough spinning and juggling. Reigning world champion Tony Gemignani, who retired undefeated, was invited to be a judge of this category.

The closing ceremony was one of the highlights of the entire event. In the middle of the competition area were tables adorned with wine, water, plates and decoration. Everyone who had competed gathered at tables with their teams, families and friends. Teams began to mingle and the pizza started coming. I think we ate every possible combination of pizza there is. The night was capped off with the reigning Miss Italy on hand to present the awards. I wish I could have won and had her present me with an award, but that privilege went to Theresa when she won first place in the Classico Division/North America. Then the team really flipped the celebration switch.

Once the party they called the closing ceremony ended we went back to the hotel. I flipped on the television and was channel surfing when I saw a face that looked familiar. It was Tony Gemignani. Then I saw Sean Brauser and Theresa and Andy all on Italian national TV. For some reason, the U.S. Pizza Team was all over the coverage. Cool.

Thursday several members of the team siezed the day and took a trip out to Pisa to visit the Leaning Tower and soak up some local color. I didn't get to go, but I hear it was wonderful. Those who went said they are letting people go to the top once again. They said it was a once in a lifetime event and it felt like the tower was going to fall as they stood on top. They were going to take a train to Rome, but as luck would have it, every transportation worker in Italy was on a one-day strike. Maybe next year.

What a truly wonderful time we had in Italy. I hope next year's team is as fun as the group we carried this year. And a word of warning to those who are lucky enough to win a spot on the team, if you end up in the car with me, be prepared. Just ask any of the people who rode with me, anything can happen and it did.

Tryouts for next year's team will take place in Columbus, Ohio, at the Mid America Show. Keep an eye on USpizzateam.com, www.PMQ.com, and Worldpizzachampionship.com for more details on how to tryout for the team, when tryouts will take place and the rules. We have six free trips to Italy and spots on the U.S. Pizza Team to give away. Who knows, you could get lucky and end up riding with me.