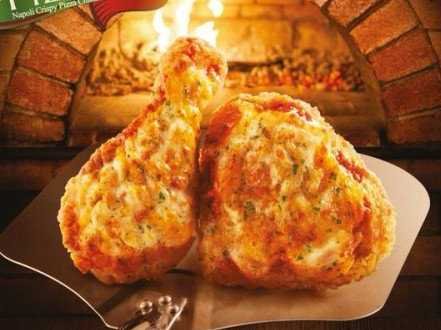 First, it was the hot dog-stuffed pizza. How does fried chicken pizza crust grab you?

BGR.com reports that KFC's "latest weapon of nutritional destruction is called the KFChizza. It subs a steaming slab of fried chicken for traditional pizza crust and it was announced on the official Twitter account of KFC Philippines. The chicken, pizza opposite food group marriage is being tested in Asia before a possible launch to the rest of the world — including KFC's late-night munchie minions in the U.S. The corporate chicken behemouth seems to believe fried poultry makes a good bread substitute — remember two chicken slices instead of buns? The scandalous rumor that KFC once served up a fried rat has been disproved as urban legend, but images of the KFChizza are, for some, the makings of a gastric nightmare. This tweet from a perspective customer can't be encouraging for KFC: "Between the Pizza Hut pizza with hot dogs and the new chicken wing-pizza hybrid by KFC, I'm thinking of going vegan.So gross!"

Watch KFC's video and read more about the pizza that clucks.