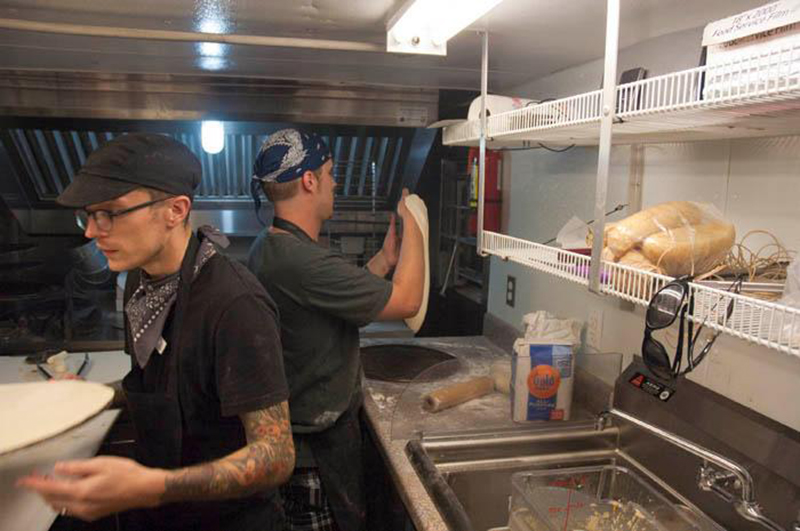 Pi Pizza, a spanking-new Houston pizza store, had some fightin’ words for a Texas gun enthusiast who posted on Facebook about the pizzeria’s no-guns-allowed policy: “We do not want your money.”

It was a bold statement linked to a highly charged political issue, and the results have been predictable: Angry gun rights activists have besieged Pi Pizza’s social media networks with complaints and negative reviews, while Pi Pizza defenders have rose up in its defense. So will Pi Pizza owner Lee Ellis, who only just last month transitioned from a food truck owner to a brick-and-mortar pizzeria operator, back down?

The whole mess started after Ellis posted signs on Pi Pizza’s door saying guns were not allowed in the restaurant. Texas now has an open-carry law for licensed gun owners, but the law does allow business owners to turn gun-toting customers away. When Kyle Kelly spotted the sign, he went to Pi Pizza’s Facebook page and posted a one-star review: “Was excited to try this place, then I saw that they ban legal concealed carry of handguns. Any business that removes my right to defend myself is a business that doesn’t want my money.”

The Pi Pizza account responded: “Hey, Kyle. FO. You are correct, we do not want your money.”

Before long, gun rights group Texas3006, which tracks businesses that don’t allow guns through their doors, posted a “Hostile Business Alert” on its Facebook page, along with a screenshot of the exchange between Kelly and Pizza Pi. Before long, bad reviews of Pi Pizza were popping up all over social media, especially on the pizzeria’s Yelp page and Facebook review page. According to Texas Monthly, the pizzeria’s Facebook page suddenly had nearly 1,000 one-star reviews, “many, if not most, written by people who never so much as tasted a single crust of Pi Pizza.”

But, of course, there are two sides to every issue. After Pi Pizza chef Anthony Calleo appealed to the restaurant’s fans, it soon amassed 1,300 five-star reviews. As the back-and-forth raged on, Yelp went into “Active Cleanup Alert” as reviews unrelated to Pi Pizza’s food kept pouring in. Pi Pizza finally disabled the review section of its Facebook page, but not because of the negative reviews, Ellis told Texas Monthly. He just didn’t want to provide a platform for gun enthusiasts, he said. “I didn’t want to help their cause. It wasn’t hurting us. I don’t want to promote their cause because I don’t think they have a cause.”

“This issue is not about guns,” he added. “We don’t want them in our building because we serve liquor.”

Meanwhile, conservative news organizations like Breitbart have covered the controversy extensively and various gun-rights groups have also spread the word about Pi Pizza’s policy and the incendiary Facebook post. C.J. Grisham, founder of Open Carry Texas, told Breitbart Texas that gun-rights groups weren’t upset about the no-guns policy, just about the "vulgar" Facebook response to Kelly’s review. “Pizza Pi is under fire not because of any signs in their window, but because of their treatment of a customer who pointed it out,” he said. “Had they simply responded like any other civilized and professional business, there would not have been such an outcry from the pro-liberty movement. Their childishness and vulgar actions set them apart from all the other businesses that post signs and respectfully explain their reasoning.”

For his part, Ellis told Texas Monthly that the original review – the one that started it all – was unfair since Kelly never even set foot in Pi Pizza. “He wrote a one-star review, and it was nothing about the pizza. He never even crossed over the threshold.”