Getting and paying attention to customers - PMQ Pizza Magazine 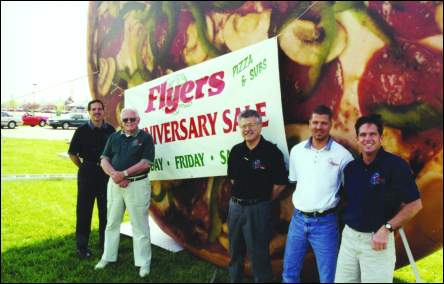 When we profiled the father and four sons of Flyers Pizza in the Spring '99 issue of PMQ we hadn't realized that we were only scratching the surface of a goldmine of pizza business ideas. Between the five members of the Ulrey family, someone is always coming up with a winning idea or solution to a problem. We've followed the Ulrey family for the last two and half years and have assembled what we believe is a "best of" collection of business and marketing ideas that we have witnessed since we first reported on them. If you would like to refer to the original profile on Flyers Pizza, get out your old Spring '99 PMQ or go to pmq.com and you'll find it there.

Sales for the year were already up 17% year-to-date when the big anniversary celebration took place during the last week of April 2000. Apparently, that is a great time to be aggressive in marketing, when things are running smooth. Having a big sales lead over the year before meant Flyers must have been doing something right. And what better time to show that "something" to new customers. Product and service were under control and Flyers decided they wanted to make a big deal out of their celebration and draw as much attention to their store and success as they could. They wanted to re-excite their existing customers and wake up the thousands of other residents in the area that had forgotten or were unaware that Flyers Pizza was in the neighborhood.

Setting the Stage for the Event

In order to get the word out about the promotion the Ulreys decided to use a combination of direct mail, radio, and flyers to set the stage for the upcoming event. About 15,000 area homes were sent an anniversary themed flyer while others were hand delivered to area hotels and businesses. A two-week radio schedule on The Eagle 103.9 was run for the period leading up to the big sales weekend. One week prior to the event, a flyer was attached to each box leaving the store so that regular customers would know about the big event. 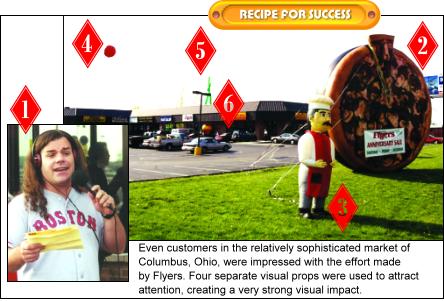 Directions:
Carefully mix the above into a coordinated marketing effort with additional store help that will be used exclusively for the marketing effort. The special marketing crew you assemble will preferably not know anything about making pizzas. Otherwise, when the phones fill up they will be sucked back into operations before they can make the most impact. Organize your specially assigned marketing crew to keep these props animated during the busy daylight hours and use them creatively to maximize exposure of the store. The "Visual Noise" strategy was used on the South Hilliard location because it was perfectly situated to take advantage of the very high Columbus traffic counts at the intersection of Hilliard Rome Road and Roberts Road. There also just happened to be an open lawn adjacent to the intersection where the visual marketing props could give an unobstructed performance to thousands of cars that would be passing the store during the 3-day event. 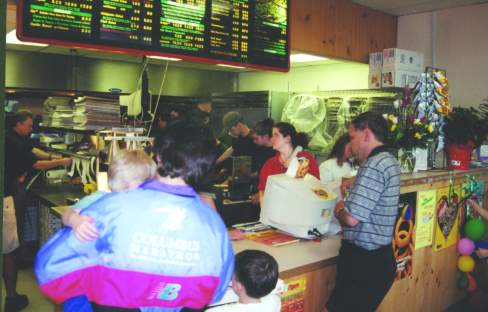 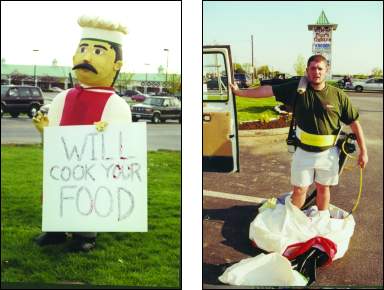 The 25 ft inflatable pizza consisted of a printed photograph of a pizza that actually evokes a hunger response when viewed from 50 yards away. And when the nearby 10ft chef is seen waving to customers, he appears to be the proud creator of this monstrosity. Attention guaranteed. When watching for the reactions of the passing drivers it was rare not to see some kind of reaction.

The marketing promotion Flyers executed at the Hilliard Store was very successful. When all the expenses related to the event were tallied, Flyers ran up a bill of $6,700. And, according to Mark Ulrey that was a bargain. "At the end of the year we estimated that a very significant amount of additional sales could be traced back to the investment we made on the promotion. It more than paid for itself." Besides being a strong return-on-investment promotion, it was fun for both customers and employees. New customers noticed Flyers Pizza and employees were proud to be the center of attention for a few days.

Nine months later when their original "West Jeff" store was going to celebrate it's 25th anniversary, they knew exactly what they were going to do. This time they would do a slightly scaled back effort, but it would be done in a suburb ten minutes west of Columbus. Ohio's capital city was about to have another marketing shock treatment.

Obviously the Ulrey's also do an excellent job of managing their people and goals because sales don't stay high without constant attention to detail. Steve elaborates, "marketing can bring customers in, but it's management that brings them back, and part of that is keeping things fresh, challenging your managers and crew, and asking your employees for ideas. Don't ever think you know it all, go outside your shop and talk to consultants, sales people and pizza operators. If you use only your own people, in-breeding happens and things get stale."

The big events are only a part of the overall marketing that customers see. The Ulreys always have something planned. Every quarter there will be a basic theme that the company will follow along with many additional marketing programs that all add to incremental sales and profits. Let's take a look at some of their other marketing strategies.

Hale for Judge, McAlister for Senate and Flyers for Pizza.The humor was appreciated by countless customers. About 50 of these political signs were distributed throughout Flyers delivery areas.

This outdoor sign helps support the West Jefferson store. Mark Ulrey only rents right-hand-read outdoor signs twice a year for the months of April and August. He's found that he usually gets an extra month free because the sign company doesn't always have the sign sold when the contract month is over. The sign stays there until it's eventually replaced.

"The Pizza Maker" scratch game is a product of Gold Seal Promotions (610-799-0461) They've done the contest twice, but really liked what it did the first time. A box of these includes 20,000 scratch cards. If the customer collects all three components of pizza. (Dough, Sauce and Cheese) They'll win a buy one get one free coupon. Only 50 out of each 1000 are "dough" scratch cards making the occurrence ofÊwinning less frequent.

Marketing material such as this promotional poster used to remind customers of the Hawaiian Pizza is found throughout their stores. "I just ask my food service rep (Presto Foods) and other manufacturer reps if they have any free marketing material I can have. I always like to have something new for the customers to think about," says Mark Ulrey.

Mark recommends that you always ask for the specials. Ask about rebates. Get purchasing advise. They estimate that they save tens of thousands of dollars a year buying smart. And buying smart means investing time in talking with manufacturer and food distributor reps.

The lunch buffet is stocked five days a week to quickly serve those during the busy and all-too-short lunch hour. Wednesday night is the only night it's open. But with all the church going, Wednesday night diners make it worthwhile. About 50% of lunch comes from the buffet.

Flyers proudly displays the local high school banner. High school volley ball girls and the Junior High football players wear shirts with a Flyers logo. And when the Athletic Association President asked Wayne Ulrey to donate 30 folding chairs to the gymnasium he agreed. Now during basketball games the backs of 30 chairs face the crowd with a Flyers logo.

Flyers Pizza promotes an easy-to-use birthday program which is supplied by Impact USA marketing. (800-653-8837) Special cards are given to customers or they are located on counters. The applicant fills out the card which includes a space for his birthday. Then the cards are collected and filed by month. At the beginning of each month, the cards are mailed to the applicants. It works very well in sitdown operations and Flyers has been doing it since 1997. The card entitles the birthday guest a free spaghetti dinner or small pizza. And guess what? They practically always bring their whole family.

Flyers always has something for the kids to keep them entertained. Currently they are giving children a styrofoam airplane from U.S. Toy (800-255-6124), which cost 17 cents per piece. Now they are giving coloring sheets that they get from their food distributor with crayons.

When things get busy Flyers relies on their numbering systems which is supported by their Rapid Fire POS system. When a numbered tent is handed to the customer at the time of ordering, that number is placed into the computer and it ends up being printed on the receipt. Now the server just matches the order to the right table.

Mark Ulrey says that the black plastic wear gives a more upscale look. Don't you agree? They don't have a dishwasher in the store and customers throw away their own trash.

At Flyers the dough is placed in the pan, right after it is weighed and cut. There it does 90% of the proofing. The plastic surrounding the pizza keeps them hot and moist. Dough is made daily.

The Ulreys pose with their newly adopted mascot, a Stearman Model 75. The plane is owned and piloted by Captain Greg Pfeil, pilot for USAirways. The wingspan is 32' 2" and has a length of 25' 4". It is powered by a 7 cylinder radial engine with a wood propeller and because of its open cockpit, it is only flown during warm weather. Yes, that's why they aren't using it for the January grand opening of the next Flyers Pizza.

Now that the Ulreys have been selling pizza for over 25 years, and have developed a strong presence in the Columbus market, they are planning on going to the next level using franchising as a tool for growth. Bill Repack is their Franchise Specialist 800-261-5055. Anyone who is interested in franchising a Flyers Pizza Franchise should contact him directly. He is expert in franchising and will screen applicants for consideration. If you are thinking of franchising your pizza operation you may want to talk with him about handling your franchising details.

Come see Flyers close up and first hand by viewing the Flyers Pizzacam right now. The camera broadcasts from the West Jefferson locations and can be viewed at www.pmq.com. PMQ