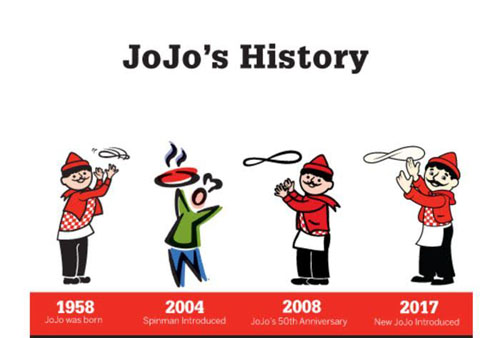 Dallas, TX– After almost 60 years, there will be a new look at your local Pizza Inn. Pizza Inn is giving JoJo a makeover and rolling out its new tagline ‘America’s Hometown Pizza Place.’ The new logo and tagline were created in partnership with agency of record, Johnson & Sekin.

“JoJo is such a well-known icon in the restaurant industry and we felt the time was right for an update,” said Bob Bafundo, president of Pizza Inn, Inc. “The new logo and tagline reflect the almost 60 years of history of our brand with an eye towards our next generation and future. They are not conveying major changes with the company or our great pizza; but rather better communicating our pride in being America’s Hometown Pizza Place.”

Pizza Inns’ new branding debuts nationally with the first promotion of 2017. The new evolution of the JoJo logo continues the familiar elements such as his signature red hat andthick mustache, and connotesa new welcoming face, as well as illustrates him tossing the fresh dough that Pizza Inn makes daily. Additionally, the updated JoJo and tagline are incorporated in to all new food and lifestyle photography, packaging elements, and crew wearables, as well as all digital, social media and advertising channels. Pizza Inn has also introduced a website refresh and branding video that illustrates Pizza Inns’ hometown roots. As part of the new branding, Pizza Inn will include additional menu items and a loyalty program coming in the nextcoupleof weeks.

“Ask anyone, and they have a story or memory about Pizza Inn in their hometown or where they currently live,” said Chris Sekin, Executive Creative Director and Managing Partner of Johnson & Sekin. “The brand is deeply personal for people, and it encapsulates the values of a great American hometown.”

In 1958, two Texas brothers opened the first Pizza Inn across from the Southern Methodist University in Dallas, TX. As word spread of the restaurant’s exceptional pizza and friendly service, so did Pizza Inn locations. In no time, taste buds across the country were able to experience the made–from–scratch crispy, crackery Original Thin crust and tangy signature sauce that are still hallmarks of the Pizza Inn brand today. Pizza Inn continues to be a leader in pizza innovation through new menu additions like introducing the Taco Pizza, the first dessert “pizzert” pizza, and the chain’s hallmark bacon cheeseburger pizza.

Watch this video about the brand upgrade:

Founded in 1958, Pizza Inn is an international pizza chain featuring traditional and specialty pizzas, as well as freshly made pastas, sandwiches, and desserts. Pizza Inn was recently inducted in to thePizza Hall of Fameby PMQ Magazine. Pizza Inn is a subsidiary of RAVE Restaurant Group, Inc. (NASDAQ: RAVE) based in Dallas. RAVE owns, franchises and supplies more than 300 Pizza Inn and Pie Five restaurants operating domestically and internationally. For more information, please visitwww.pizzainn.com.