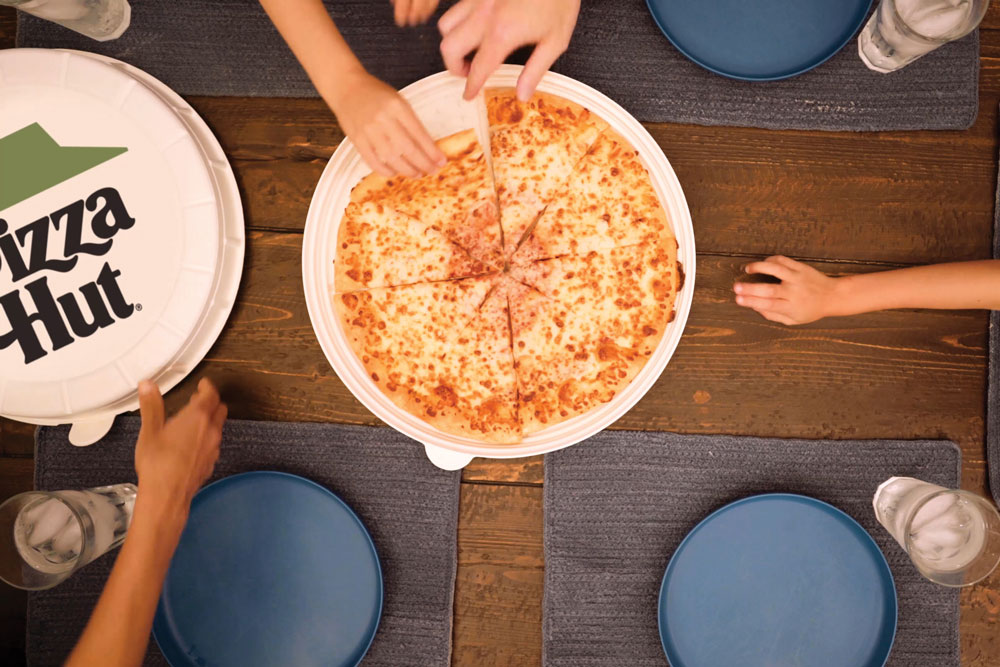 Pizza Hut’s round, compostable delivery box was developed in a partnership with Zume.

Pizza Hut tied two growing trends—plant-based meats and sustainability—together in a single box at one of its Phoenix locations in October. The chain worked with Zume, a California-based pizza tech company, to design a round, industrially compostable box for its Garden Specialty Pizza, which is topped with plant-based Italian sausage from Incogmeato, onions, mushrooms and banana peppers. Made of sustainably harvested plant fiber, the eco-friendly round box was “engineered to make our products taste even better by delivering hotter, crispier pizzas,” said Nicolas Burquier, Pizza Hut’s chief customer and operations officer. The Garden Specialty pies also scored eco-friendly extra credit by tapping plant-based proteins, which use less water and generate fewer greenhouse gas emissions than animal proteins. Pizza Hut said it was testing the box in Phoenix and will look for ways “to roll the box out more widely in the near future.”

Blaze Pizza gave customers an excuse to dust off their ’70s-era black lights with a delivery-only promotion for Halloween. In addition to offering free delivery through its website and mobile app from October 28 through November 7, Blaze packaged random pies in boxes that revealed “secret messages”—such as “Dare to Open,” “Creepin’ It Real” and “Bone Appetit”—when exposed to black light. Customers who received the black light boxes were invited to post pictures on their social media accounts with the hashtag #BlazeHalloweenSweeps for a chance to win prizes. The grand prize: one large pizza delivered for free every week for a year. Another lucky customer won 10 free large pizzas for a pizza party, while 10 Blaze fans were awarded with one large pie.

Some customers are picky eaters by choice, others by necessity. Now Boston-based UNO Pizzeria & Grill has launched a supplemental menu for all of them. The chain’s “Love All, Feed All” menu is designed for guests with specific dietary preferences or requirements and includes more than 50 options for calorie counters, vegans, vegetarians, and those with gluten or dairy sensitivity. It was developed with input from People for the Ethical Treatment of Animals (PETA).

The menu offers 20-plus items with 600 calories or less, including thin-crust pizzas featuring toppings like spinach, goat cheese and caramelized onions, or roasted eggplant, spinach, pesto and feta; five vegan items, such as the thin-crust Vegan Garden Pizza and Vegan Cheese Pizza (made with Daiya mozzarella-style shreds) as well as a plant-based burger made with proteins from Beyond Meat; and more than 15 vegetarian items, like the Eggplant Parm Pizzanini, with roasted eggplant, caramelized onions, mozzarella, basil and marinara sauce.

The “Love All, Feed All” menu also boasts 15-plus dishes for customers with celiac disease or gluten sensitivity, along with 10 dishes that have 10 or fewer grams of carbohydrates. UNO’s website provides nutrition information that covers calories, total fat, saturated fat, trans fat, sodium, carbs and more.

In a press statement, Jim Ilaria, UNO’s CEO, said the new rollout is “a drastic modernization and expansion of our menu and its first major overhaul in decades.” He added that the supplemental menu ensures that “everyone can walk through our doors confident they will enjoy a tasty meal regardless of their dietary interests.

“All of us in all of our families have someone who is vegan or, unfortunately, gluten-sensitive or, like me, trying to lose some weight,” Ilaria told Nation’s Restaurant News. “We think we’ve really dropped the mic on other casual dining [chains] that are just putting their toe in the water.”