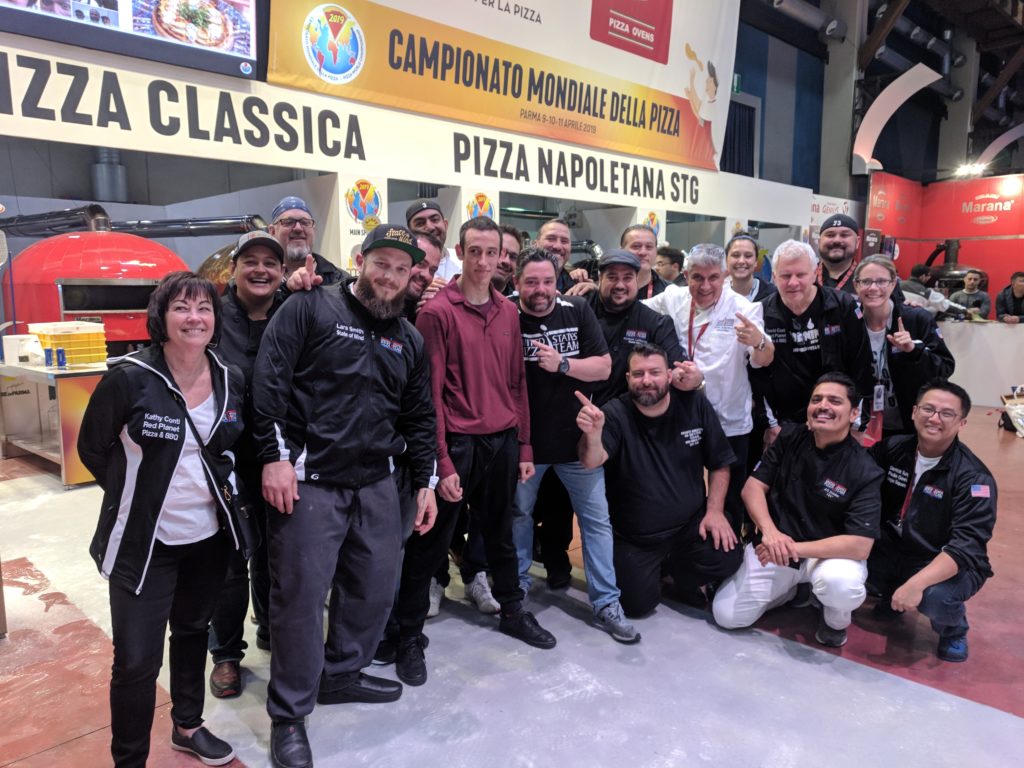 The U.S. Pizza Team poses at the 2019 World Pizza Championship in Parma, Italy.

For the third time this year, pizza athletes will test their mettle under the gaze of TV cameras as the U.S. Pizza Team (USPT) holds its Summer Trials in Haverhill,  on June 25.

Talented pizza makers from far and wide will gather at the New England Pizza Conference to compete in Freestyle Acrobatics, Fastest Pie Making, Largest Dough Stretch, and Fastest Box Folding categories. The event is open to all acrobatic competitors. The winner of the Freestyle Acrobatics category will earn a grand-prize trip to compete as a USPT member in the European Pizza & Pasta Show, to be held November 13 to 15 in London, England.

All of the action will be broadcast live on ESPN3 in conjunction with broadcast partner Go Live Sports Cast.

This pizza sports season’s two previous events, the Winter Trials and Spring Trials, produced two champions. In January, Scott Volpe of Fiamme Pizzeria Napoletana in Tucson, Arizona, won the Winter Trials held at the Mid America Restaurant Expo. Volpe snagged a grand-prize trip to Italy, where he went on to become a world champion by winning gold at the World Pizza Championship.

Tara Hattan of Andolini’s in Tulsa, Oklahoma wowed the judges to win the grand prize at the Spring Trials at the Sofo Signature Showcase in Toledo, Ohio. She will compete for the U.S.A. and Andolini’s in the UK in November.

The Summer Trials will be the third USPT event broadcast live by ESPN3 this year, marking a new era for pizza sports, according to PMQ publisher Steve Green, who founded the USPT.

“This is a huge step forward for pizza sports and for all of those independent operators looking for a way to set themselves apart from their competitors, especially the big chains,” Green said. “ESPN’s coverage has opened the door to new branding and exposure opportunities for pizzeria owners looking for a unique marketing slant. You or one of your pizza makers could be the next Tom Brady of pizza sports.”

“As more pizzeria owners join us and help us promote these competitions to their customers and brand fans, I can envision pizza sports growing in popularity and moving up quickly from ESPN3 to ESPN2 and, eventually, ESPN itself,” Green added.

The U.S. Pizza Team was founded in 2000 with the goal of bringing competition and excitement to the pizza industry. Since its formation, the USPT has participated in an international event every year, most frequently at the World Pizza Championship in Parma, Italy. Ranging from culinary masters to dough-tossing phenoms, the USPT renews the passion of those in the industry year after year.

For more information about the United States Pizza Team, or to register to compete, visit http://uspizzateam.com/nepc, or contact Brian Hernandez at brian@pmq.com or 662-234-5481 x129.