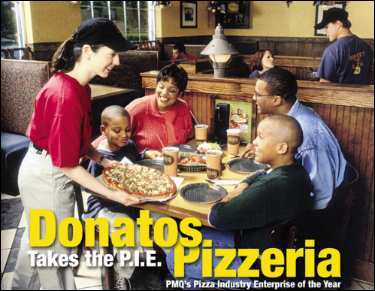 In the Pizza Power 2002 article from the last issue of PMQ, we took an in-depth look at what has been going on in the pizza industry over the last 12 months. In that article, Donatos Pizzeria Corp. was awarded the PMQ Pizza Industry Enterprise of the Year (PIE) award.

We didn't select them because they had the most locations or the highest sales, but because they were able to achieve a respectable increase in same-store sales while managing a 26 percent increase in the total number of units along with their innovative ideas and approach to customers.

Adding to being awarded the PIE, Donatos Pizzeria Corp. was also ranked by Technomic as the ninth fastest growing chain in the U.S. based on sales increase percentage out of all chains. What could be called the cherry on top is the fact that Donatos passed Papa John's in average unit sales. This is probably what you should expect from a McDonald's owned company, but it appears they aren't going down the "let's mass produce a generic product across the country" road. Even though McDonald's now owns them, it appears the parent company has made the decision to let them continue to do what has brought them this far.

McDonald's purchased Columbus, Ohio-based Donatos Pizzeria in 1999 from the founder Jim Grote, who still serves as executive chairman. At that time they had about 146 locations. McDonald's was looking for a concept that was the best in its class, not to take it over and run it like McDonald's hamburger restaurants, but a concept they could allow to be what it was and grow with their help. They looked at about 60 pizza concepts before they came to Donatos and decided to go with them based on their product and culture.

The Culture of Donatos

The main thing Jim wanted his company to be was a good neighbor. "Jim always wanted his restaurants to be known for promoting good will," says Tom Krouse, senior vice president of marketing for Donatos. "Jim stresses people, product and principle. We want our locations to be an asset to the community, not a corporate eyesore. Our stores are involved in the community and we treat people, including our associates, well. Everybody has a memory of their first job and they carry that with them through life. We want people to have a good memory of Donatos."

One of the way Donatos gets involved in the community is through the Coaches Kit for area sports teams. Each kit comes with a clipboard and pen, lanyard and whistle, important coaching tips and a "Pizza Playbook of Coupons" good for one free seven-inch one-topping pizza and a Coke. Coaches can award these to players for most improved player, player of the game or any other way they like. "Kids are such a big part of the community," says Lisa Goldstein, Donatos Philadelphia area community sales manager. "With the kit, coaches have a way to motivate sports teams to be more successful. Hopefully, kids will have fun eating our pizza as well!"

"McDonald's wanted us to be what we are and they haven't changed a single thing," Tom says. "It's always been Donatos' strategy; they just brought their expertise into the concept. We've added new subs, improved salads, but still have the same pizzas, amount of toppings and ingredients."

One of the things that has always distinguished Donatos' pizzas is the edge-to-edge placement of toppings. To insure consistency, they have always portion controlled ingredients and have and will continue to use the same ingredient weights. "People don't want to get a loaded pizza one time and come back later to get something less than they had before," Tom says. "Another thing that helped build our brand are the ingredients, like the family recipe sausage we use. Jim's father made the sausage at his butcher's shop in the beginning and we still use the same recipe today. Our sauce comes from a recipe Jim's mother created in the beginning and it's still used today too."

Pizzas are pre-sauced and cheesed in anticipation of large crowds. Vegetables are sliced fresh daily and each pepperoni pizza is guaranteed to have at least 100 pepperonis, which is added by a predetermined weight. Once the order is placed the pizzas are cooked on E Flow and Lincoln conveyor ovens. The average time from order to table is about 10 minutes.

Donatos has three different basic building types: freestanding, in-line and end cap locations at the end of retail centers. Some have no dine-in services, some have counter service and some have 'dine at your own pace' service. "The dine at your own pace service is at the core of what Donatos is about," says Tom. "It's about taking down the barriers and giving control to the customers. One feature we offer in some locations is our On-Call Service. This concept utilizes phones at each table where customers can phone in the orders to the kitchen when they are ready. If they want, customers can phone in calls for drinks, get the check or assistance. Out of the 200 locations we currently have, about 60 are equipped with On-Call Service."

Tom says the real nuts and bolts of Donatos marketing is through door hanging, postcards, community involvement and going door to door in neighborhoods, especially when they move into a new neighborhood. The most successful promotion is the half price pizza deal, where customers buy a large and get a second pizza at half price, which is an everyday offer. In addition to going door to door in new areas, they also give away free pizzas with their Random Acts of Pizza campaign.

"Many Donatos locations have PT Cruisers with giant Donatos logos on them," says Tom. "We go into new areas, soccer games, baseball games, festivals and parks and set up a stand and banner and serve free pizzas. It allows us to get to know the community while giving them the opportunity to sample our products. We also have games for the kids to play and make it fun."

Having gained more than 70 locations since 1998, Donatos is beginning to make its move in the pizza industry. Of the 200 locations they currently have, about 75 percent are company-owned with the remaining locations franchised. Not only are they expanding in the U.S., they have just opened their first European location in Munich, Germany. So congratulations to Donatos Pizzeria Corp., PMQ's Pizza Industry Enterprise of the Year (PIE). We'll be keeping an eye on you and looking to see who will be our PIE winner in 2003. PMQ

At only 20-years-old with $1,300 in his pocket and a dream to own his own business, Ohio State University sophomore, Jim Grote, bought a small pizzeria on the south side of Columbus, Ohio, and went to work to create a business that was truly unique – Donatos Pizzeria.

Grote believed that with a superior product, great people and a business with strong, identifiable principles he would find success. To create that superior product, Grote returned to his roots. His mother's homemade pizza sauce became the base while the unique sausage prepared at this father's butcher shop became a signature item. Nearly 40 years later, both of these items remain as integral parts of Donatos.

If you have been keeping up with events happening in the pizza industry, you may have heard that effective November 19th, Donatos closed all 23 Atlanta locations. I was able to contact Tom Krouse right at deadline to get some comments on the closures and see what's going on. According to Tom, the Atlanta market was 'a classroom lesson' for Donatos.

"These (Atlanta locations) were part of our concept development," Tom said. "When we opened these locations, we didn't offer all of the services we do at most of our other locations, but through them we developed innovations and learned good lessons that we will take with us. It was a very difficult decision, but we felt if was in the best interest of Donatos to close these under-performing stores and take those lessons learned and use them as we focus on better performing markets and continue with expansion plans.

"The most difficult part of the decision was deciding on what we could do for the employees. We held a job fair with Boston Market and McDonald's with placement counseling and a severance package. The severance package should provide for management through the remainder of the year while hourly employees were paid an additional full week's pay. It is our goal to have every employee placed either with our partners or in other restaurants.