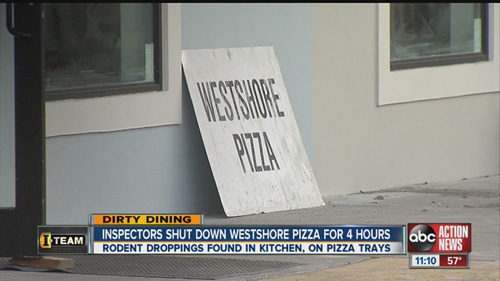 Rats! I hate it when that happens! That would be getting closed down by the health department because of evidence that live rodents were working something up in your pizza kitchen.

According to ABCactionnews.com, Safety Harbor, Florida's Westshore Pizza's menu says "We're Proud of All Our Food!" But management may not have been so proud of one location last week after the restaurant was shut down for over four hours by the state.The restaurant had to temporarily close its doors Jan. 28 after inspectors found evidence that live rodents were in the kitchen. What kind of evidence? You guessed it. State inspectors documented rodent droppings on clean pizza trays, can holder racks, near the slicer, reach-in cooler, large mixer, soda boxes and in the men's restroom.

Read more and watch the video about how this Florida pizza joint is trying to recover from this embarrassing development.