Detroit-style pizza debuted at Buddy’s Rendezvous in 1946. The bar opened in 1936, and when owner Gus Guerra wanted to add food 10 years later, he turned to his Sicilian mother-in-law for advice.

“There was only one pizza place in Detroit at the time—a place called Vesuvio’s serving round pizzas,” says Jack Guerra Sr., son of Gus and co-owner of Cloverleaf Bar & Restaurant in Eastpointe, Michigan. “My dad and grandma decided they wanted to put together a thick, square Sicilian pizza called a sfincione.”

“He never told me exactly where he found the pans,” Guerra adds. “But they used to be dripping pans for auto parts.” The deep, blue steel pans act like a cast iron skillet might, retaining heat and building up flavor over time.

Guerra’s dad told him the pizza took off immediately, with customers choosing pizza over sandwiches. “The pizza was kind of like a hot sandwich, you know?” says Guerra.

Seven years later, in 1953, with business booming, Guerra sold Buddy’s and opened Cloverleaf Bar & Restaurant in Eastpointe, Michigan. “There were three partners in the Buddy’s business: my father and my mother’s two uncles,” Guerra explains. “There was a bit of a problem, and they ended up splitting up the business and selling it. That’s when my father moved to East Detroit and bought Cloverleaf.” 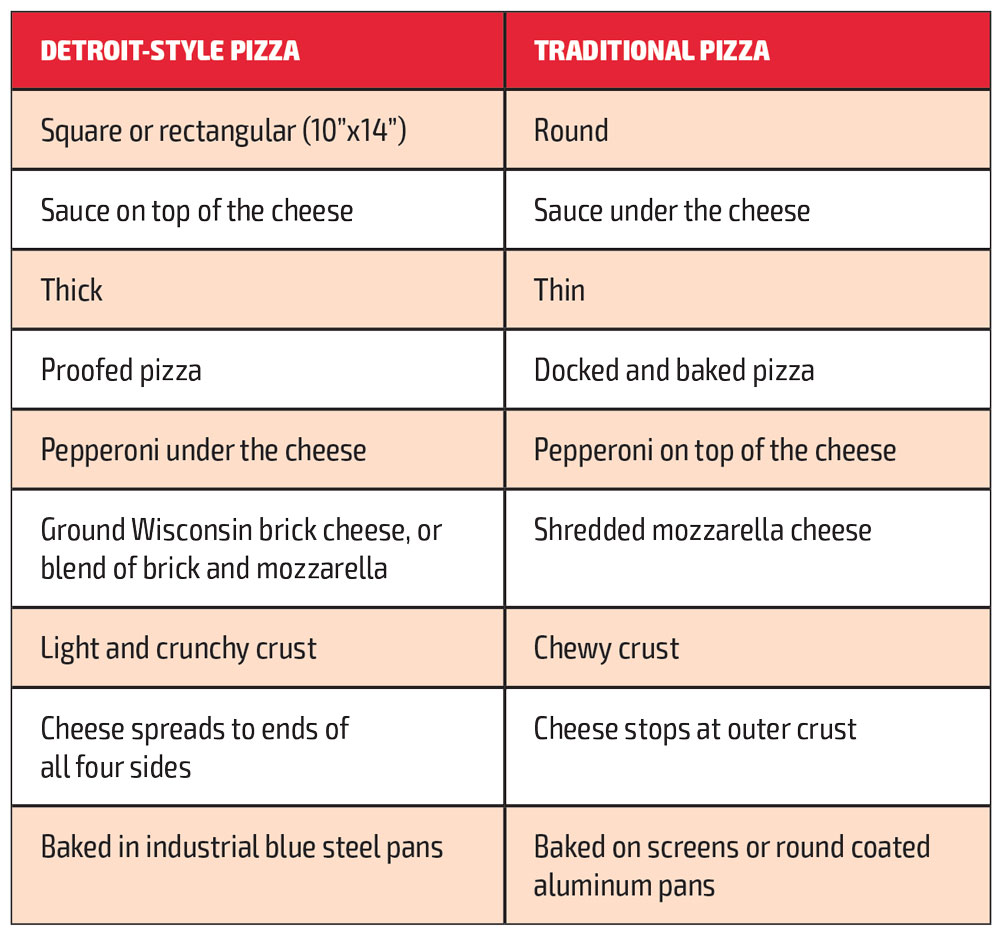 Guerra says his dad sold Buddy’s and opened Cloverleaf the same year, to instant success. “It went really well and immediately started expanding,” Guerra explains. “We’ve been here since 1953, and we still have people coming here since the time they met and started dating.”

Carol Corrie, longtime employee and now general manager at Cloverleaf, remembers Gus hanging out at the Cloverleaf bar and chatting with customers. “They made only cheese and pepperoni pizzas when they started,” she says. “Gus told me that one day a customer came in with green peppers from his garden and asked Gus if he would put them on his pizza. Gus said that was how the pizzeria began putting additional toppings on the pizza.”

“Detroit-style pizza is a unique product and a labor of love,” says Wes Pikula, chief operating officer at Buddy’s Pizza. “It’s much harder to execute. Detroit style is unique in dough, proofing, double-hand stretching, the pans, the cheese, etc. It’s difficult to execute consistently unless you’re willing to go all in.”

Pikula goes on to describe the important elements of a Detroit-style pizza. “It’s the combination of the crunchy crust, buttery flavor, baked cheese edges, and a light, airy and balanced flavor,” he says.

Deep pans are essential in creating the signature caramelized cheese edge and thick, fluffy crust that’s so recognizable on a Detroit-style pizza. Seasoned over years, the blue steel pans impart a flavor not found anywhere else in the country. The deep sides allow the cheese—which is sprinkled all the way to the edges—to caramelize in the most wonderful way. “The pans are becoming increasingly hard to find,” Guerra notes. “The blue steel pans my dad used really aren’t available anymore, and the galvanized ones they make shouldn’t be used for pizza. A lot of companies are offering pans that are treated already so you don’t have the sticking problem.”

After stretching the proofed dough into the pan, regional brick cheese (a semihard Wisconsin cow’s milk cheese, with a taste similar to sharp cheddar, that gets its name from the original process of using bricks to press moisture out of it) is generously applied across the dough and up the sides of the buttered or greased pan. Dollops of marinara sauce are held back until after the pizza exits the oven; this ensures a signature crispy crust and caramelized cheese edges.

Hearing words such as “blue steel pans” and “brick cheese” may have already scared some of you off. These products can indeed be difficult to find. However, if you’re truly determined, there are ways you can use similar cheeses (such as white cheddar-mozzarella blends) and deep seasoned pans that can still get you closer to the pizzas you’d find in Detroit.

“If you have time and patience, you can make anything, as long as you keep testing it,” Guerra says. “It took me eight months to come up with a good gluten-free pizza here. It just takes time. If you’ve got the heart for it, you can put something good together, there’s no doubt about it.”

Over the last decade, Detroit-style pizza has evolved into one of the country’s hottest pizza styles. Pikula believes that travelers have helped to spread the word. “The resurgence of the city of Detroit has brought many tourists and travelers to the city who have experienced Buddy’s Pizza for the first time, and they have helped spread the word,” Pikula explains. “The North American International Auto Show has helped move Buddy’s folklore to Canada, and the international press has featured Buddy’s as part of their experience in the city.” Travel and food shows, along with national media publications and online listicles, continue to include Detroit-style pizza in growing numbers.

Meanwhile, as operators discover how difficult it can be to mimic Detroit-style pies, some operators who already have the recipe down are starting to expand. Within Michigan, Detroit-style pizza can be found in most pizzerias, with a few having previous ties to Buddy’s before branching out on their own or creating spin-offs. “I think my dad would be really happy that Detroit-style pizza is gaining more recognition; I’m sure he’s smiling up there,” Guerra says. “We’re doing our best to push the pizza here. We have six stores open, and we’re opening another one in a few months.”

Buddy’s, currently with 12 locations, also looks to reach the masses. “Buddy’s expansion is more about getting our style of pizza to more fans,” says Pikula. “On a local level, the popularity has always been part of Buddy’s Pizza, since its start in 1946. It isn’t often a new pizza style category gets recognition this late in the history of pizza.”