As the largest city in the Midwest, Chicago has earned its right to do things big—big buildings, big sports and big pizza! There’s no such thing as leaving a pizzeria hungry in this town: Whether you’re sitting down to a deep-dish pie loaded with cheese, meat and veggies, or a five-pound stuffed pizza, chances are, you’re leaving with leftovers. Even at the pizzerias that serve hand-tossed and thin-crust pies, you’re met with appetizers you can’t resist and desserts that call out your name. It’s no wonder that Chicago is often referred to as the City of Big Shoulders! 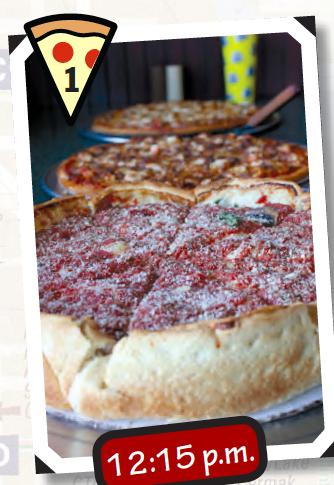 At our first stop, we anticipated finding out the story behind stuffed pizza, and when we saw those hefty pies rolling out of the oven at Nancy’s Pizza (www.nancyspizza.com), we knew our first meal in Chicago was going to be a hearty one.

The story goes that in the early 1970s, pizzeria owner Rocco Palese went home to Italy and while there took note of “Easter cake,” traditionally served for the springtime holiday and filled with ricotta and other ingredients, such as sausage. When he returned Stateside, he decided to try the same idea with pizza ingredients, piling heaps of mozzarella into a high-edged dough skin and finishing with yet another layer of dough and sauce. He opened Nancy’s, named after his wife, Annunziata, in 1973 to sell his new creation, and even today the original stuffed pizza remains as popular as ever.

Though the winning recipe hasn’t changed over several decades, other innovations have taken place, including one that more than tripled productivity: David C. Howey Jr., current president of Chicago Franchise Systems, bought Nancy’s in 1990 and was able to work with an oven company to create a model that allows a stuffed pizza to be cooked in 13 minutes rather than the usual 45 (keep in mind that a 12” pie clocks in at 2 1/2” thick and about 5 pounds!). But the real secret to the company’s success, says Howey, has been Nancy’s dedication to consistency and quality of both product and customer service. “To survive in a pizza city like Chicago for as long as we have, and to really flourish as we have, is a testament to the product,” he says.

In recent years, the company has spread its footprint: Howey started franchising Nancy’s in 1994, and now 40 locations exist, stretching from Chicago’s suburbs to the Atlanta area. But vice president of franchise development Michael Stadnicki assures us that consistency and staying true to the Nancy’s legacy remain top priority. “Our focus is on freshness and quality, and we’ve really harnessed and perfected that,” he says. “There are a lot of imitators, but we’re true legends. That takes time.” 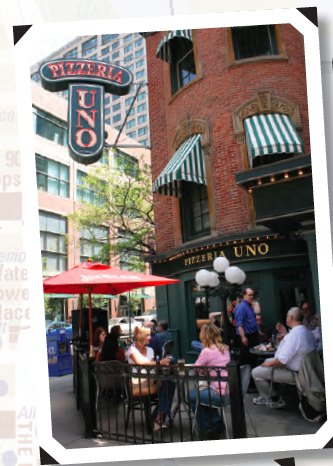 Still recovering from heaps of stuffed pizza, we decided to take on deep dish! The original deep-dish pizza—a style that later became synonymous with the Windy City—started making its mark in 1943, when Ike Sewell opened up Pizzeria Uno (www.unos.com) at 29 E. Ohio St. in downtown Chicago. Little did he know the impact that his recipe would make worldwide: This modest pizzeria has spawned a huge chain of full-service restaurants (now called Uno Chicago Grill), and the block of Wabash Avenue that intersects Ohio, where the original restaurant still stands today, has been given an honorary name—Ike Sewell Way.

Money and fame followed Sewell’s new invention, and so did legions of fans; today, people around the world crave deep-dish, which is partly why this original location offers frozen pizzas to go—tourists take pies home thousands of miles away, and natives ship the pizzas cross-country to relocated family members who dream of Uno’s thick layers of toppings and crunchy crust. Meanwhile, visitors who eat in are usually prepared for a lengthy wait. “Word of mouth is huge in Chicago, and everybody knows about Pizzeria Uno,” says Donna Theis, general manager. (Perhaps the crowds here are rivaled only by the second location, Pizzeria Due, which opened in 1955 just one block away.) And not only tourists flock in: “We have people who have been coming here for 50, 60 years,” she claims.

Even though the Uno concept has been corporatized and expanded, at this location, guests can expect a simple, pared-down menu that is much like the original, with items still made from the original recipes. “This restaurant will never change,” says Theis. In fact, she claims that the secret to Uno’s success has involved “keeping to the tradition of our pizza—and our staff. We have people who have been here for 30 years; they take great pride in it. We have a quality pizza, good memories and great value.” 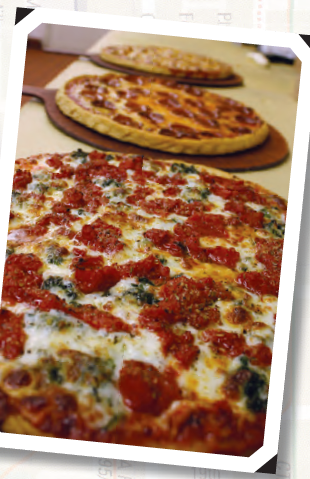 On the South Side of Chicago, across from a neighborhood baseball field, Home Run Inn’s (www.homeruninn.com) original location has been serving its customers for 61 years. Named for the fly balls that sometimes hit the windows of the sandwich shop and tavern that previously occupied the building, Nick Perino opened the pizzeria with his wife, Laura, when he returned home from the Army 1947, and the business has remained in the family ever since. True to tradition, the recipe also hasn’t changed, according to Kevin Costello, Nick Perino’s grandson of sales and finance for Home Run Inn. “We have an old-world family recipe product and, as a family business, we’ve remained true to that,” says Costello. “People like the consistency of a good product—one they remember from when they were kids.”

In 1987, the first Home Run Inn frozen food plant was opened, and with the popularity garnered from offering both a frozen product and an eat-in restaurant, expansion began to take off, resulting in the opening of seven more locations in the Chicagoland area. To retain consistency, Costello says, all of the dough, sauce and sausage is made at a central commissary and shipped out to the eight restaurants. “We even shred and vacuum pack the cheese at the commissary so that no matter which of our restaurants you’re in, you get the same pizza,” he says.

So what has made the business stand out and survive for more than 60 years? Costello points to a number of factors: “We use only tomato puree in our tomato sauce, contract buying it at harvest time; we make—and age—our own dough; we purchase our cheese from the No. 1 cheese manufacturer; we use 85% lean pork and a proprietary spice blend for our sausage; and we recently began using an all-natural pepperoni.”

Besides the focus on a time-tested recipe, Costello also earns repeat business through a variety of marketing techniques and company values. Home Run Inn focuses on its core customers, families, with a school lunch program, fundraisers, gift cards, a Pizza Lover’s League and online ordering. “When you stay true to a recipe and you find your core customer base with that product in an efficient manner and with good service, that’s winning combination,” says Costello. “I think people gravitate toward that and will always come back to that kind of loyalty.” 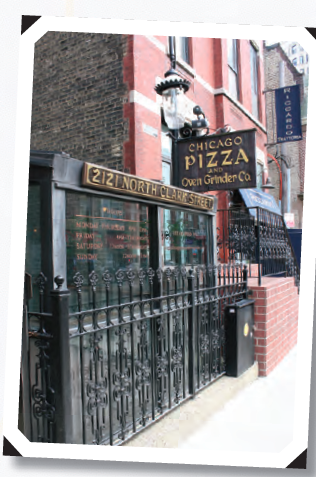 Housed in a historic building dating back to the days of Al Capone, the Chicago Pizza and Oven Grinder Co. (www.chicagopizzaandovengrinder.com) intrigued us with a one-of-a-kind menu item: pizza pot pie.

Local lawyer Albert Beaver came up with the idea for the pizza pot pie after a night of brainstorming ways to carve out his own niche in a city full of pizzerias. That was in 1972; now, 36 years later, the restaurant still offers the same staple menu items—pizza pot pies, oven grinders, Mediterranean bread and salads—and doesn’t require much more to please its patrons.

General manager Catherine Gallanis says that the pizza pot pies are still the most popular item on the menu; even the uninitiated who wander into the restaurant looking for deep dish or slices end up falling in love with the pies, which are hand-flipped at the table by servers. “This is the only place in Chicago you can find a pizza pot pie,” says Gallanis. “It’s something very unique.”

In addition to the pot pies, the massive Mediterranean bread (which refuses to conform to the size of any standard plate) and homemade salad dressings also have a loyal following. “We found out that people love to mix together our sweet-and sour poppy seed and sour cream garlic dressings,” says Gallanis. “A lot of our customers buy the dressings to take home with them.”

One of the best benefits of becoming a neighborhood institution is that you become a part of people’s families, says Gallanis. “We have a lot of people who had their first date here or got engaged here and now are bringing their kids. We now have second and sometimes third-generation customers.”

Keeping a simple menu allows Chicago Pizza and Oven Grinder Co. to serve consistently high-quality ingredients every day without the worry of rotating menu items or stocking a long list of ingredients. Talks of expansion in the past have been squelched by concerns that a second location could cause the first one to lose its charm. Gallanis says that for now, they don’t want to mess with a formula that works; they just want to continue doing what they’re doing for many generations to come. 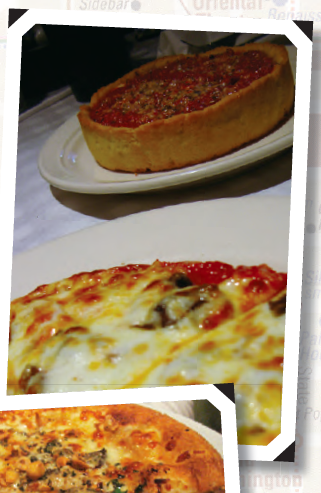 Just steps from our room at the Best Western River North Hotel—in fact, right inside the lobby—we found the perfect lunch special at Pizzeria Ora (www.pizzeriaora.com), offering us our own personal deep-dish or hand-tossed pizza served with salad. True, we had already eaten pizza all over town, but what are a few more slices, right? In addition to handling dine-in customers and room service orders for the hotel, Pizzeria Ora also offers its pizzas, sandwiches, appetizers and entrees through delivery and pickup (with convenient online ordering) to the surrounding area.

“A mano” means “by hand,” and at A Mano Italian Trattoria (www.amanochicago.com), the pizzas definitely have a personal touch. Handcrafted with gourmet ingredients in unique combinations—we sampled one with wild mushrooms, caramelized onion, white truffle oil, taleggio cheese and hazelnuts—the pies are cooked to burning oven on premises, presided over by chef John Caputo. This location also attracts customers with nightly specials, including $5 pizzas at the bar from 5 p.m. to 7 p.m. Though most people don’t associate Chicago pizza with Italian-style thin-crust pies, this newcomer restaurant (open less than one year) has already established a significant following from locals and tourists alike.

La Madia (www.dinelamadia.com) stays true to its tagline: “Art of Pizza. Love of Wine.” This restaurant offers thin-crust pizzas seared in a wood-burning oven, complemented by an extensive wine list that’s pages long (each dish also comes with a wine suggestion, taking the guesswork out of food pairing). We couldn’t resist starting out with the Pizza Fondue appetizer, which arrived with puffy, fresh-from-the-oven pizza bread and a cheesy tomato sauce for dipping. For dinner, we tried one veggie—with roasted asparagus, sweet onions, pecorino Toscano and oregano—and one meat, with La Madia’s house-made fennel sausage, sweet peppers and Vidalia onions.