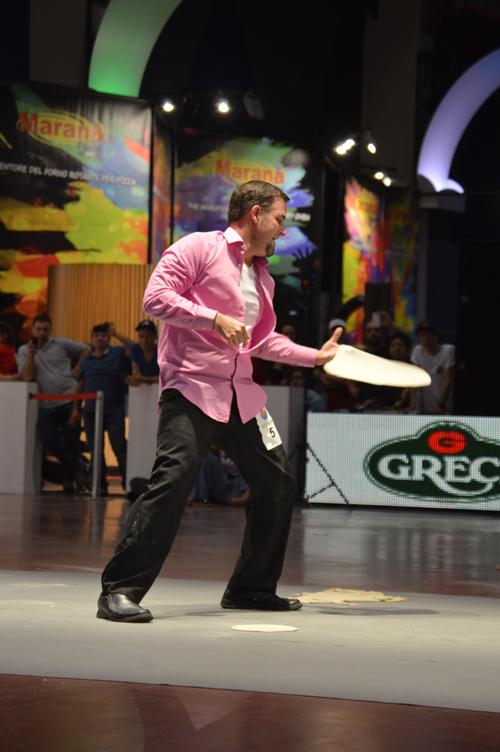 Juggling pizza dough in a bright pink shirt and white fedora to the pulsating rhythms of Bruno Mars' "Uptown Funk," Jamie Culliton, U.S. Pizza Team member from St. Petersburg, Florida, (pictured) earned second place in Freestyle Pizza Acrobatics for the second straight year at the World Pizza Championships in Parma, Italy. This year, Culliton told PMQ that he saved his secret weapon until the second round of competition.

That beautiful surprise was a mid-routine dance turn with elegantly-gowned U.S. Pizza team colleague Samantha Jones, co-owner of Mellow Mushroom in Chattanooga, Tennessee. Saying that he was thrilled to finish again among the top pizza acrobatic practitioners in the world, Culliton thanked Jones and the rest of his American teammates for inspiring him to new performance heights.  "To hear my teammates cheering me on made me proud to be an American pizzaiolo," said the veteran pie spinner and U.S. Pizza Team acrobatic coach.

Although U.S. Pizza Team members didn't finish in the top three in any other events in three-day World Championships, their pizzas earned praise behind the scenes from the mostly Italian judges. The American pie makers brought their own unique ingredients with them from American home bases like California, Indiana, Nashville, Chicago, Ohio, Arkansas, and Staten Island, New York. But they also scoured the local markets in Parma, known as Italy's Food Valley, to find artisan cheese, olives, prosciutto, basil and oregano to entice the judges with customized pizza offerings. "Our style of pizza making is different in America," explained Lenny Giordano of Mona Lisa Pizza in Staten Island, a return U.S. competitor who is originally from Sicily and speaks fluent Italian. "We get better and learn more every year we come over, but win or lose, I'm proud of my teammates and proud to be competing for America."

The competition pace in cooking tests such as Pizza-for-Two, Pizza In Teglia (In the Pan), Pizza on the Peel, Classica, Dough Stretching, Fastest Dough Maker, Gluten-Free Pizza and a non-pizza-making event called Heinze Beck, was grueling. But the American team found some free time to enjoy trips–and prepare an 8-course meal–while visiting the Academia Barilla and Verona, the historic hometown of Romeo and Juliet.

In all, 600 competitors from 20 nations took part in the celebration of pizza-making mastery. The sense of togetherness which propelled the American team was perhaps best exemplified by a contingent of Americans from Five Points Pizza in Nashville. Competitor Chris Mallon was accompanied on the trip by a five-person support committee including the owners of his pizzeria.