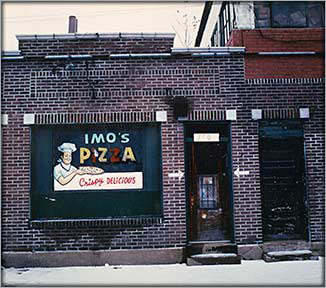 To really "fit in" in St. Louis, you need to have graduated from a local high school and love St. Louis-style pizza like they make at the beloved local chain, Imo's. Eric Christensen, who grew up in Kentucky, is left with option No. 2. He loves the Provel cheese-laden square-cut, cracker-thin pies so much — he is marrying one. Yes marrying, as in wedded bliss, "what's mine is yours."

According to the Riverfront Times, Christensen, who leads a local comedy troupe, STL Up Late, made the video offer to fund his group's Kickstarter campaign. As of this week, the comedian's adopted city had stepped up to support the marriage raising $35,394 to top the stated goal of $35,000. Christensen and his comic teammates will be the stars of a show on St. Louis' KMOV TV, starting this November.

If you like this story, why don't you marry it? Or just read more and watch the video about this perfect union of flesh and cracker.