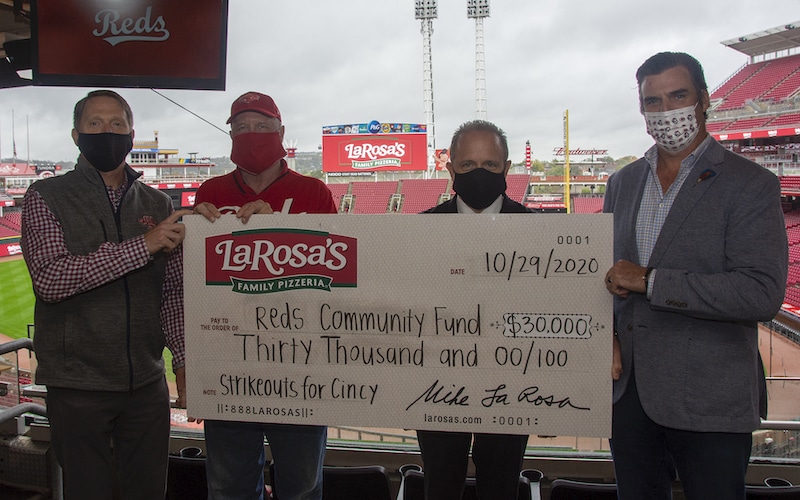 LaRosa's staffers present a $30,000 check to the Reds Community Fund.

A popular LaRosa’s Family Pizzeria promotion for Cincinnati Reds fans struck out this summer as COVID-19 emptied MLB ball parks nationwide, but the beloved chain was soon back at bat with a revised campaign called Strikeouts for Cincy.

Prior to the pandemic, LaRosa’s offered the Strikeouts for Slices promotion for seven years. Every time a Reds pitcher struck out 11 or more batters in any regular-season or Wild Card Playoff game, LaRosa’s gave away a free small pizza to every fan who attended the game. The company estimates it has given away $5 million worth of free pizza.

During the 2020 season, LaRosa’s paid it forward by contributing $1,000 to the Reds Community Fund for the same feat. By the end of the season, Reds pitchers had thrown 29 eleven-strikeout games, netting $29,000 for the team’s nonprofit arm. “We were so glad that we could still be an active part of the 2020 season by helping the Reds Community Fund help thousands of kids through baseball,” said Mike LaRosa, CEO of LaRosa’s, Inc. “And to thank the Reds for a great run, we decided to make our contribution an even $30,000.”

Established in 2001, the Reds Community Fund improves the lives of underserved youth through baseball and softball programs as well as fundraising programs.

LaRosa’s was midway through a five-year sponsorship agreement with the Reds in 2020.

To demonstrate its continued commitment to the Reds, LaRosa’s has extended its sponsorship and Strikeouts promotion another year, through the 2023 baseball season.

“Who knows what 2021 will bring?” LaRosa said. “We’ll likely need to be as flexible as we were this year in determining our best approach.”