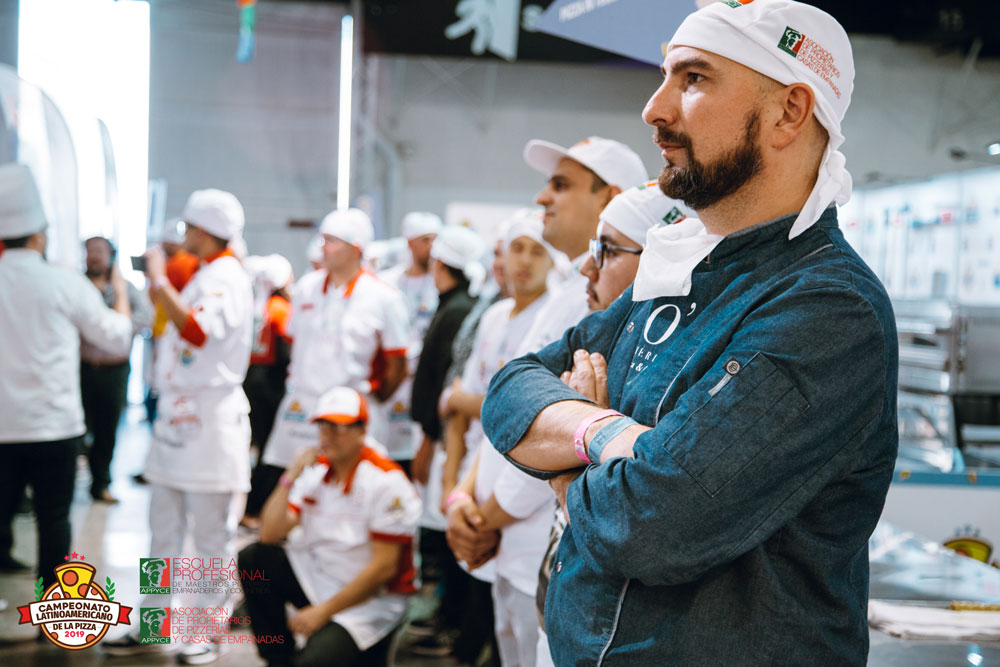 Julio Cuevas looks on at the Latin American Pizza Championship in Buenos Aires, Argentina. Take a look inside his pizzeria at pmq.com/chile.

The night before Julio Cuevas opened his pizzeria, Omertá, in the swanky downtown district of Bella Vista in Santiago, Chile, he was exhausted. The entire week had been devoted to settling a long-standing court case, his final one as a family law attorney. “I was at the hearings in the morning, at the pizzeria in the evenings to cook and experiment, and at night I was studying for the next morning to do it all over again,” Cuevas says. He won the court case on the morning of his pizzeria’s opening day, and his client invited him out to celebrate. “I told him, ‘I’m sorry, I can’t go to dinner. I’m opening a pizzeria tonight.’ He was shocked.”

Cuevas also had to break the news to other clients—and to his parents. He figured the reactions would be negative, so he had made a pact with his business partners to keep their pizza plans quiet for as long as possible. Their silent agreement became the tongue-in-cheek name of the pizzeria. “The meaning of ‘omertá’ is very deep in Italy,” Cuevas says. “It means ‘I don’t talk, I don’t see, I don’t hear.’ It’s not OK for professionals to suddenly go into something where you use your hands. But my job as a lawyer was so stressful that my family broke apart.”

In other words, in his quest for a career with less stress, Cuevas turned to his beloved hobby—making pizza—for a living.

At Omertá, a chic fusion of pizza and fine dining, diners can experience gourmet fare that’s unique in the Chilean market. Cuevas’ crown-jewel pizza, the Luxury of the Sea, features black dough made with squid ink and comes topped with caviar and tender octopus. The octopus alone takes a week to prepare, and it’s just one of several meticulously artisanal pizzas Cuevas has developed.

“I learned how to make pizza from my ex-mother-in-law,” he says. “She is from Argentina and is used to making pizza at home. Over time, I got good at it and invited friends over. My friends would say, ‘You have to open a shop. You have a very unique approach here in Chile!’”

But Cuevas didn’t want to open just any pizzeria—it would have to be amazing. He conducted a series of experiments in dough making and researched ingredients to find the best of what Chile has to offer. “In the middle of this process, I discovered Neapolitan pizza,” he recounts. “Neapolitan pizza blew my mind.”

Most Chilean pizza parlors are strictly fast-food affairs, usually showcasing Argentinian pan pizza or a cracker-base style that’s made for the masses. “The national dish here is the hot dog, not pizza,” Cuevas notes. He’s not kidding. In downtown Santiago, quick-service restaurants display a “pizza completa,” a thick-based pizza topped with all the ingredients you’d find on a hot dog: processed meat, mayonnaise, ketchup or tomatoes, and avocado. Italian pizzerias exist in Argentina, but Neapolitan-style pizza is virtually unknown.

Omertá offers a luxurious culinary experience using as many regional products from Chile as possible. “I want to change the idea of pizza here in Chile,” Cuevas says. “A lot of people think you have to use all Italian ingredients to have a gourmet pizza, but we have a very good product here, and we use Chilean flour.” The mozzarella fior de latte comes from Los Ángeles, about 300 kilometers (186 miles) to the south. The organic oregano is grown in the country’s northern highlands. “That’s the difference between a typical pizzeria and my pizzeria—I love to use Chilean products,” Cuevas says.

Cuevas’ specialty pies pay tribute to the cuisines of all regions of Chile. One example is the Araucana pizza, inspired by an indigenous culture from Patagonia. It’s topped with cinnamon-smoked pork ribs, longaniza sausage and merkén peppers that have been dry-smoked with coriander seeds. Other regional pizzas focus on seafood. “We have 4,000 miles of coastline, so we need to take all the stuff from the sea and put it in my pizza!” Cuevas says, smiling.

More Stressed Than Ever

After competing in the Latin American Pizza Championship in Buenos Aires in June, Cuevas is still feeling inspired. “It was an amazing experience, something different. I met so many pizza makers who still keep in touch on WhatsApp and Instagram.” Cuevas made it to the semifinals, which ranked him among the top 12 pizza makers from Latin America.

Competitors in the event were asked to make a pizza representing their country, which Cuevas found to be particularly difficult. “Chilean cuisine is being born right now,” he says. “The Peruvian guys just developed their cuisine 20 years ago. If you go to Peru, you’re going to find all the same things in all the same restaurants. In Chile, not yet. You see creative food. All restaurants are trying to discover new flavors or make something different with Chilean products in mind. That’s why I love to use local organic oregano and local octopus or make my own jerky. It’s very exciting.”

For his competition entry, finally settled on a pizza topped with spicy pork and pearls created with crystal chili pepper juice and an oregano infusion.

Although Cuevas went into the pizza business to reduce his stress, it didn’t work out that way. He now owns three stores and is working on his fourth. He also wants to travel to Italy and earn his certification as an authentic Neapolitan pizzaiolo. “Now I am even more stressed than I was as a lawyer,” he says. “I get very tired, but I go to sleep happy because I’m following my passion.”

Missy Green is a pizza spinning gold medalist and PMQ’s international correspondent. She currently resides in the Netherlands.