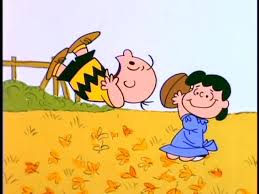 It was a glorious moment for local round-headed kid Charlie Brown. After years of teasing, tormenting and mistrust, Brown finally kicked a football held by classmate Lucy Van Pelt. “I just gave her two slices of pepperoni pizza, and she didn’t pull the football away,” Brown sighed with satisfaction. “It’s a dream come true.”

Van Pelt was less sentimental. “I’d just eaten one slice, and I was still holding the second slice in my free hand when that blockhead came running up to kick the ball. My fingers were greasy, and I guess my right hand just slipped before I could pull the ball away.” Van Pelt shook her head ruefully, adding, “It wasn’t even good pizza.”

But the moment was not lost on Brown.  “Seeing that ball tumbling through the clear blue sky…. I'm not at all ashamed to admit I got a little misty-eyed.” But it wasn't entirely a fairy-tale ending. Brown missed the field goal by at least 20 feet as the errant ball crashed through the window of a neighbor’s house. But small victories are still victories. “I feel so confident after the kick, I finally have the nerve to ask out that little red-haired girl!” an exuberant Brown exclaimed.

Lucy's brother Linus later confirmed that Brown was rejected by the unnamed girl in question. Brown reportedly went home and crawled into bed with a stomach-ache.